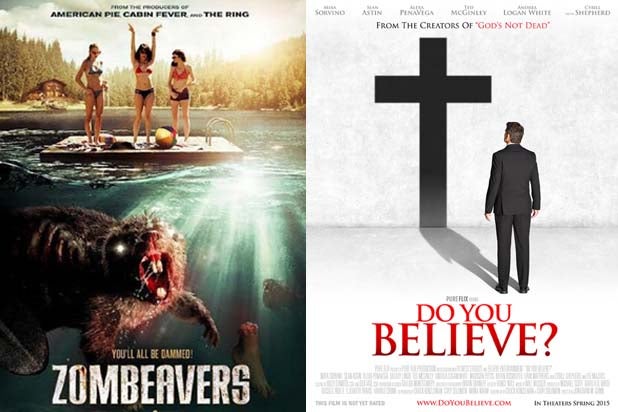 Indie distributor Freestyle Releasing will have one of stranger double bills at the box office this weekend, rolling out the Christian drama “Do You Believe?” and the horror comedy “Zombeavers” on Friday.

“Imagine the cross-promotions we could have done,” said Mark Borde, distribution chief at Freestyle, which is providing support for that film’s distributor Pure Flix.

“Zombeavers Will Dam You to Hell” is the racy romp’s catch phrase, so the marketing team wasn’t far off that, but it’s hard to imagine two more different target audiences.

“Do You Believe?” is the follow-up to another faith-based Pure Flix film, “God’s Not Dead,” the $2 million indie drama that took in $60 million at the domestic box office on this same pre-Easter weekend last year.

The PG-13-rated Christian drama is directed by Jonathan M. Gunn and stars Ted McGinley, Mira Sorvino, Cybill Shepherd, Lee Majors, Sean Astin and Brian Bosworth. It’s about a local pastor (McGinley) whose life intersects with an old street-corner preacher (Delroy Lindo) and several others. Freestyle will have it in about 1,300 theaters.

“Zombeavers,” on the other hand, is an R-rated horror comedy about a group of three college guys and their girlfriends who go to a mountain cabin, get drunk and topless, and then encounter the zombie version of the wood-chomping rodents. Gore and hilarity ensue in the production from Armory Films and Bender-Spink.

The only recognizable name in the cast is the musician John Mayer, playing a redneck truck driver who starts the fun with a toxic spill into a nearby river.

Free Style has it in just 10 theaters, mainly because it will do most of its business via video on demand. That’s not necessarily because moviegoers won’t want to be seen in public watching it.

“It’s hilarious, really a great film,” said Borde, before its premiere Thursday night at the Ace Theater in Los Angeles. “For this kind of movie, I mean.”