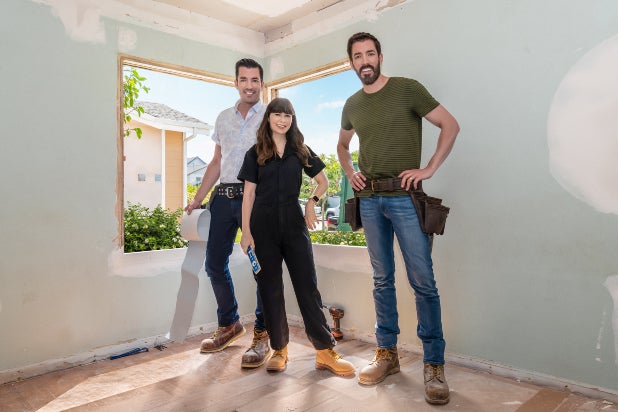 Zooey Deschanel and boyfriend Jonathan Scott are finally doing an HGTV show together. Or at least one episode.

Deschanel is doing an episode of “Celebrity IOU,” in which Drew and Jonathan Scott will renovate the “New Girl” star’s best friend Sarah’s 900-square-foot home into a “functional open concept.”

“The new space, designed with Sarah’s growing family in mind, will feature a stunning kitchen island, built-in banquette seating with hidden storage and striking custom light fixtures,” according to HGTV.

“Celebrity IOU” features Hollywood stars who express their deep gratitude to the individuals who have had a major impact on their lives by gifting them with heartwarming home renovations that bring everyone to tears. The series features Drew and Jonathan Scott as they help each award-winning star with the surprise home overhauls.

“Sarah and I met before the first day of Kindergarten because we were going to be in a carpool together,” Zooey Deschanel said in a statement provided by HGTV. “From Day 1, everything Sarah did I thought was just the best.”

“Sarah is one of those people who I will always be there for because she’s like my sister and she has always been there for me too,” she continued. “It’s so nice to have somebody that you can mutually lean upon and be there for–always. She really means a lot to me.”

The HGTV press release about the “Celebrity IOU” episode did not mention Zooey and Jonathan’s relationship. The two met last year doing an episode of “Carpool Karaoke” together. (She’s the much better singer.)

“Celebrity IOU” is produced by Scott Brothers Entertainment, with Drew and Jonathan as executive producers.