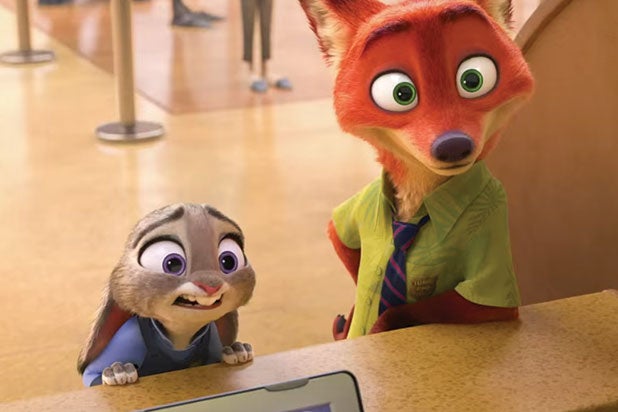 “Zootopia” blew up the box office with a $75.1 million debut this weekend, the best-ever opening for Disney Animation and the latest sign that the Mouse House’s in-house unit now packs the same powerful box office and creative punch as its sibling, Pixar Animation.

The big showing for “Zootopia” — which was directed by Byron Howard and Rich Moore and voiced by Ginnifer Goodwin, Jason Bateman, Idris Elba, J.K. Simmons, Octavia Spencer and Shakira, among others — was the best March opening ever for an animated film.

And it’s all the more impressive since this was the rare animated feature that wasn’t based on a familiar book or character and didn’t rely on super-A-list voice stars.

Also Read: 'Zootopia': Critics Call Animated Film 'The Whole Package' and 'One of the Greatest Disney Animated Movies' Ever

How did “Zootopia” zoom right to the top of the box office — and dethrone three-time champ “Deadpool” — and take its place among the all-time hits for Disney Animation? Here are a few reasons:

1. The Right Timing
It has been a bit more than a month since DreamWorks Animation’s “Kung Fu Panda 3” opened and held the top spot at the box office for two weeks. That movie’s success primed the pump for the minivan set.

2. The Push Me, Pull You Factor
Some animated family movies get kids so excited — think “Kung Fu Panda 3” — that they almost push their parents into the theaters. Others so intrigue parents — think “Inside Out” — that they nearly pull their kids to the multiplexes. Some, like “Zootopia,” manage to do both.

3. The Right Message
With the Oscars shining a very bright light on Hollywood’s extremely disappointing treatment of minorities, “Zootopia” clicked with a topical message that prejudice, like equality, can be a two-way street.

And it managed to do what so many strident voices have not been able to do: suggest a course of action to both sides, the minority and the majority (predators and prey in “Zootopia”), without alienating either. It’s a message that should travel, too, as evidenced by the film’s appeal overseas, where “Zootopia” has made nearly $160 million already.

4. A Terrific Movie
Often lost in bottom-line analysis is an elemental reality: The movie has to work. “Zootopia” did — in a big way. With a screenplay by Jared Bush and Phil Johnston, it currently enjoys an incredible 99 percent “fresh” score on Rotten Tomatoes and not surprisingly drew an “A” CinemaScore from audiences.

5. That Pixar Rivalry
It’s no secret that the intramural competition between Disney Animation and Pixar is fierce. When the in-house unit lost its creative juice in the late 1990s and early 2000s, Pixar was making its name with “Toy Story,” “Finding Nemo” and “The Incredibles,” becoming so attractive that Disney bought the company for $7.4 billion in 2006.

That price has turned out to be a bargain because Pixar hits like “Wall-E,” “Up” and “Toy Story 3” have since generated more than $5.8 billion at the box office and six Academy Awards.

And despite the $857 million global haul for Oscar winner “Inside Out,” Pixar posted its first major box office misfire with last November’s “The Good Dinosaur,” which grossed just $314 million worldwide on a $200 million budget.