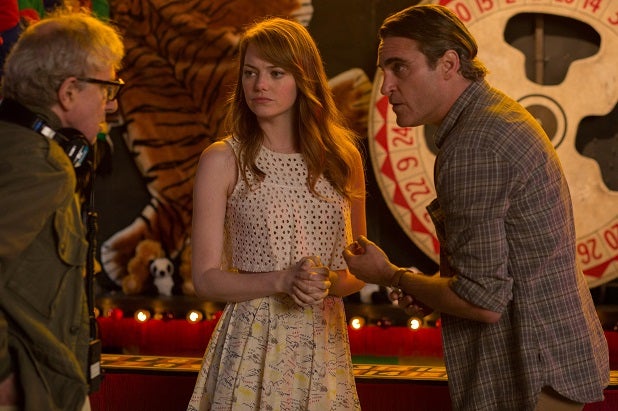 If you’re a Woody Allen fan you’ll recognize his dialogue immediately. Pretentious academics, worshipful female students coming on to their professors, constant dialogue between morality and immorality – everything we’ve come to know about what occupies Allen’s inner world. The only difference this time around is that he mercifully cast a younger man, Joaquin Phoenix, in the part he would usually either inhabit himself or give over to a much older actor.

Allen’s early short stories and plays echo through “An Irrational Man.”  He would take a simple setup and inject a fifth business element that would send the characters on a funny, absurdist adventure replete with quirky characters.  He doesn’t want to go much deeper or darker with his latest film though he clearly expresses lingering shock and grief over the war in Iraq, impotence and man’s futility operating a constant hum in the background leading to insurmountable depression.  His cure for this is to take action, even if it means committing a capital crime.

Phoenix is gifted with a repeating jazz score which mostly works in contrast to his downtrodden, morose personality. Naturally, Emma Stone’s character is drawn to the complicated man she longs to fix. Her boyfriend is a good guy and all but he’s not brilliant, he’s not worldly, he’s not dark, he’s not trouble.

Phoenix’s philosophy teacher has mostly had it with the great minds that talked a lot about the human condition but did nothing about it. When Phoenix and Stone happen to hear a story about a terrible judge, Phoenix sets out to commit the perfect murder. While not screwball like “Manhattan Murder Mystery,” and not quite a murder thriller like “Crimes and Misdemeanors” or “Match Point,” “An Irrational Man” is nonetheless in the same ballpark – murder mixed with affairs mixed with justice mixed with that ongoing debate Allen keeps having with himself as to whether it’s really a crime being committed if no one ever catches you.

The delight of this film and most every other she stars in, is Emma Stone. Parker Posey plays an older wife of a teacher who likewise throws herself at Phoenix and one wonders why she was cast in this part, which is all but a waste of her comic gifts. Why not just have Emma Stone in the film and leave it at that. Stone is handed the whole film, essentially, and she works well as a Woody Allen muse. She doesn’t have the explosive sexuality of Scarlett Johansson but exists somewhere in between Louise Lasser and Diane Keaton – that hits the sweet spot for what Allen is trying to do with her bright young student character.

Since we’ve gone over the morality of murder in two of his previous films, there doesn’t seem to be a point in rehashing it except that the funny and brilliant thing about this rumination on it is that Allen seems to have observed here that one crime can lead to another and another and another as one busily tries to cover it up.

By now, so much of what Woody Allen is doing with his films is putting all of the same pieces back in a can, shake it up, and dumping them all back out in a slightly different order. In his later years with this film and “Midnight in Paris,” he is enjoying whimsy a bit more. Does that mean he’s a changed man? Has he found that happiness can indeed be achieved? There will always be that need to try to find out more about Woody by reading what he chooses to write about, something he rejects of course.

For his part, Phoenix doesn’t do a bad job doing a Woody Allen lead. He’s somewhat out of his comfort zone in a part seemingly better suited for someone like Michael Caine but it’s always a pleasure to see this actor attempt new things. That said, the sexual tension between Stone and Phoenix is non-existent. She’s a tough one to match with as inevitably when paired up with a male lead who is older than 30, they come off like parent and child rather than lovers. Stone makes up for it by being the pursuer but there isn’t a lot of chemistry to spare between the two of them.

All in all, there is nothing to hate about “An Irrational Man,” nothing to passionately love, but it should hit the Woody demographic just fine and that demographic is shifting away from the film nerds and over to the senior citizens who turn out in droves to see this kind of delightful arthouse fare.