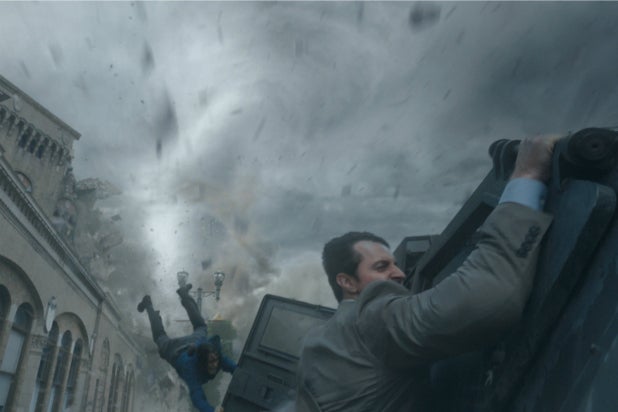 Whipping itself into a fairly futile frenzy, “Into the Storm” wants to be an Irwin Allen-style disaster movie for the YouTube and iPhone era. It incorporates footage ostensibly shot by the characters among more traditional camerawork and filming technique.

The hybrid end results follows the misadventures of a group of storm trackers led by Matt Walsh, as documentary film maker Pete, and Sarah Wayne Callies, as meteorologist Allison, as they look for tornado trouble near the heartland small-town of Silverton.

There’s also, of course, footage shot by on-the-ground Silvertonians, including Max Deacon’s Donnie, assigned by Richard Armitage, as his vice-principal dad Gary, to videotape the high school’s graduation day. As dark clouds rush across the horizon and start churning themselves into mega-storms, however, Donnie’s cameras and Pete’s equipment are going to take in a lot more than the people behind the cameras are expecting to see.

See video: ‘Into the Storm’ Trailer Threatens to Blow Audiences Away (Video)

You cannot fault “Into the Storm” for doing what it says on the tin: there’s plenty of CGI-tornado action, perilous dangers, close shaves, and brutal tragedy. Director Steven Quale previously gave us “Final Destination 5,” where horror-movie fate built up to clever, squirm-inducing sequences of trouble for the characters. Here, though, he’s upped the level of destruction while simultaneously decreasing our interest; tornadoes, as random acts of weather and God, are hard to endow with meaning or motivation.

Mixing mayhem and melodrama, “Into the Storm” stumbles from set-piece to set-piece as the film progresses through its reed-slender 89-minute running time. We’re told that the efforts of Pete and his storm trackers will result in data that could save lives, a la “Twister,” but we also get to see a fire-tornado suck up and ignite supporting characters. There’s discussion of how global weather patterns are getting worse, and we see a mega tornado sweep through an airport and toss jumbo jets into the sky like the playthings of an angry childish giant.

The effects are both impressive and somewhat off-the-rack at the same time; when a cow-sign flies off a building in Silverton’s downtown, it’s hard not to note another nod to “Twister,” the 1996 tornado-disaster would-be epic about storm-chasers and storms, which had the benefit of being shot as a film, with stationary cameras.

The gimmick behind “Into the Storm,” intended to provide you-are-there immediacy, couldn’t be more distancing, keeping you at arm’s length from the material beyond even your constant desire to yell at the characters to stop filming and, you know, run.

The performances are perfunctory: Walsh, a gifted comedic actor, plays Pete as a two-dimensional driven jerk, while Callies counsels caution in between calls to her daughter back home. The gruff, distant Gary, as played by Armitage, reconciles with his sons as he saves them. There’s also two characters intended as condescending comedy relief,  would-be YouTube stars straight out of “Hee Haw,” Kyle Davis’ Donk and Jon Reep’s Reevis, who go over like lead balloons no matter how high the wind gusts.

The effects team, led by Randall Starr (“Journey 2: The Mysterious Island”), has great fun with the film’s more outlandish moments of destruction — schools, cars, and trees all wiped from the face of the earth as if God scratched his thumb hard over the landscape — but the ever-increasing fury and number of the storms just becomes sound and fury signifying very little, a spectacle that’s not especially spectacular.

Screenwriter John Swetnam (also the writer behind this week’s “Step Up All In”) slots typical and tired disaster-movie modules between the destruction sequences; cell phones cut out at conveniently inconvenient times, trapped youths try to survive as the water rises, characters pause for deep self-contemplation as they take shelter in a church, a community pillar fails to grasp the scope or scale of the disaster approaching the innocents he’s charged with protecting.

Those plug-and-play sequences are all Swetnam has to offer, though. Worst of all, the start of the film involves so much exposition; about the graduation, about Pete’s documentary, about Gary and Donnie’s friction, about the school’s video time capsule; that you’d be pardoned for thinking the film’s killer storms are caused by all the hot air produced by the characters venting so many factoids in the name of set-up.

With its pointless POV device and paper-thin characters whipped around by wicked winds, “Into the Storm” is intended as late-summer B-movie distraction, but it gets a D-grade. If you have to pick a stupid climate-crisis picture in 2014, well, at least “Sharknado 2: The Second One” has a sense of humor about itself.

At the climax of “Into the Storm,” colossal tornadoes make noise, blow things up, and go around in circles; that’s pretty much all the film does, too.