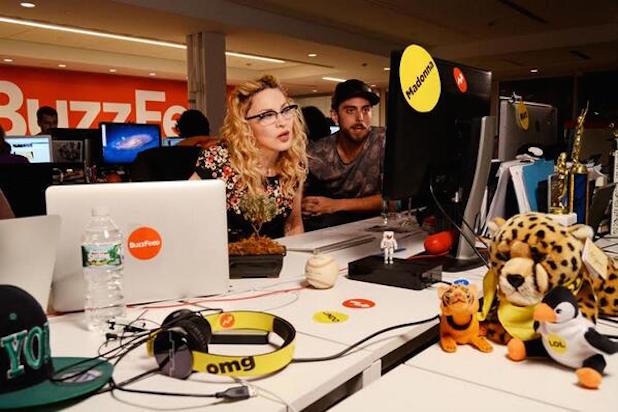 Madonna dropped in at BuzzFeed’s New York offices Monday evening and commandeered one of their computers to comment on submissions to ArtForFreedom, a “platform to define what freedom means to them and to allow them to express their right for freedom of expression.”

Also read: Gawker Rips Buzzfeed in Ban on ‘WTF,’ ‘Epic’ and Other Internet Slang From Its Website

Earlier in the month, she called upon the BuzzFeed community to share with her their “artistic expressions of freedom.” She sat at a desk and commented on various submissions.

Here are a few of her comments:

The Body Is Not An Apology

this one is my favorite. we waste far too much time trying to conform to what society expects us to look like. In fact the body is temporary and its kind of amazing how much time we waste on something that is impermanent.

don’t quit your day job. however its a very good point. people don’t know how to listen its a lost artform. mostly because everyone is on their phone.

Is It A Crime To Be A WOMAN?

in some societies it is a crime to be a woman…women are still treated like second class citizens in many parts of the world. Hopefully that will end one day soon. I love this art, its really good.

Why Juggalos Inspire Me

i love the idea of family, but i’m worried about everyone’s health.

Watch Madonna work away below: