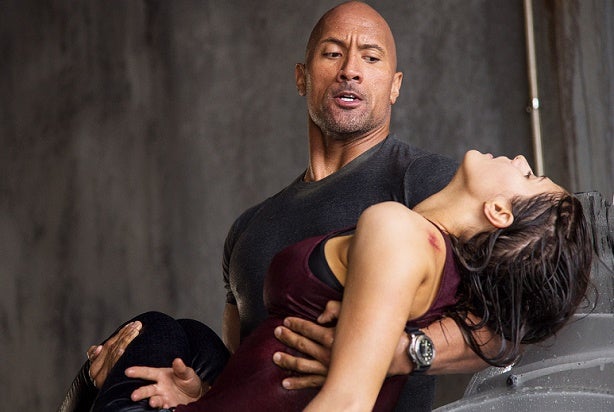 The 3D earthquake epic “San Andreas” rumbled to a $53.2 million debut at the box office this weekend, knocking Disney’s “Tomorrowland” out of the top spot and making a strong case for Dwayne ‘The Rock’ Johnson as today’s preeminent action star.

The big opening by New Line and Warner Bros.’ “San Andreas” was more than $10 million over analysts’ projections and the biggest-ever for The Rock in a lead role. It blew away the competition, including the weekend’s only other wide opener, the romantic dramedy “Aloha” starring Bradley Cooper and Emma Stone, which was far behind in sixth place for Sony.

“Pitch Perfect 2” was a distant second with $14.8 million, and the musical comedy lifted its global box office haul to $228 million for Universal — not bad for a movie that cost $29 million. Last weekend’s No. 1 film, “Tomorrowland,” followed with $13.8 million. That puts the pricey Brad Bird-directed sci-fi saga starring George Clooney at $63 million domestically after two weeks.

“Mad Max: Fury Road” was just behind with $13.4 million, and the R-rated road rage romp starring Tom Hardy and Charlize Theron is up to $115 million in two weeks for Warner Bros. Disney’s blockbuster Marvel superhero sequel “Avengers: The Age of Ultron” lifted its domestic total past $425 million and took fifth place with $11 million. Globally, “Ultron” is up to $1.32 billion and has overtaken Disney’s animated hit “Frozen” as No. 6 on the all-time list.

Writer-director s “Aloha” earned $10 million, in line with modest expectations for the film from the director of and “Almost Famous,” but less than might be suggested by its all-star cast that included , , , John Krasinski, Danny McBride and Jay Baruchel.

Fox’s reboot was seventh with $7.8 million in its second week. That’s a steep 66 percent tumble from its debut, but that’s not unusual a horror movie.

Is there a bigger action star than the 6-foot-5, 260-pound Johnson, a former pro wrestling star? Literally, probably not, and it may be true figuratively, too.

“Before this weekend he was an undisputed giant at the box office,” said Rentrak media analyst Paul Dergarabedian,” and, as self-proclaimed ‘franchise Viagra,’ he has proven to be peerless in adding his considerable box office muscle to such franchises as ‘G.I. Joe,’ ‘Fast and Furious,’ ‘The Mummy’ and ‘Journey to the Center of the Earth.’

“Now he proves he can open a movie to stellar results based on his name alone and that will be money in the bank for the star himself and the studios that will rush to work with him going forward,” he added.

Paul Giamatti, Carla Gugino, Alexandra Daddario and Ioan Gruffudd co-star in the film. But there’s no denying The Rock is on as roll. He was part of the cars-and-criminals crew that drove Universal’s “Furious 7” to a huge $1.4 billion earlier this year, making it the third-highest grossing movie ever globally.

He did three things with “San Andreas” that the best action stars must do to break out at the box office: overcome so-so reviews, attract a broad swath of moviegoers and score overseas. The audience for the earthquake saga was more female than male, albeit just barely at 51 percent. And fans gave the movie an “A-” CinemaScore, despite middling reviews from critics that have it at 49 percent positive on Rotten Tomatoes. “San Andreas” also took in an impressive $60 million from 10 foreign markets this weekend, making it the top film globally with $113 million.

“No doubt about it, he’s the man,” Dan Fellman, head of domestic distribution at Warner Bros., told TheWrap.  The fact that Johnson is shooting his next film, “Central Intelligence,” for the studio might have something to do with that.

“He’s the real deal and he works so hard,” he said. “He took two weeks off shooting ‘Central Intelligence’ to promote ‘San Andreas,’ then left the premiere at 11 p.m. to fly to China and now he’s back and will be on the set Monday.” Fellman wouldn’t say if a “San Andreas” sequel is in the works.

The special effects-laden film didn’t come cheaply, with a production budget of $110 million. But it benefited greatly from the upcharges tied to giant screen and 3D showings. A whopping 44 percent of its weekend haul came from 3D, of which RealD accounted for $19.1 million.

The third teaming of Johnson and producer Beau Flynn was charmed indeed, and the debut of the Brad Peyton-directed “San Andreas” was nearly as big as that of their “Journey 2: The Mysterious Island” ($27 million) — also directed by Peyton — and last summer’s “Hercules” ($29 million) combined.

Meanwhile, any studio concerns that jitters in earthquake-prone California might keep crowds away were put to rest. In fact 19 of the top 20 locations for “San Andreas” were on the West Coast.

“I guess they wanted to see if Burbank (where Warner Bros. is based) gets washed into the sea,” Fellman said.

Sony is hoping the mature-skewing “Aloha” can play steadily as previous films from Crowe have, and be an alternative for mature audiences amid the superheroes and sequels that dominate summer. That will take positive word of mouth however, and the reviews have been brutal (19 percent positive on Rotten Tomatoes). Audiences, which were 64 percent female and 57 percent over the age of 30, gave it a weak “B-” CinemaScore.

“Furious 7” fell out of the top ten for the first time in more than two months. It passed the $350 million mark domestically this weekend and has taken in $1.50 billion worldwide for fourth on the all-time global box office list, behind only “Avatar”($2.7 billion), “Titanic” ($2.1 billion) and “The Avengers.” ($1.51 billion.

The overall box office was roughly 18 percent behind last year’s comparable weekend, when Disney’s debuted with $69 million. But the arrival of Universal’s “Jurassic World” on Friday should reverse that trend.