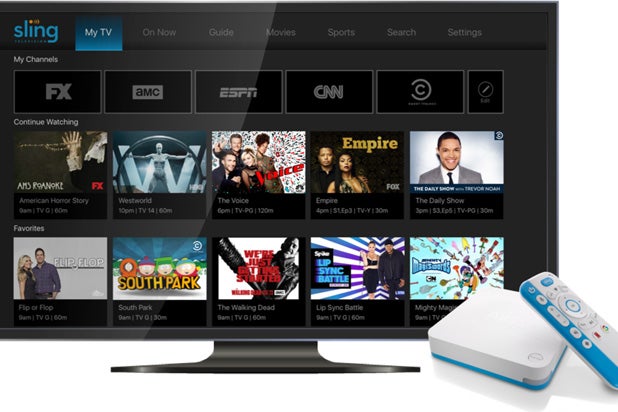 Accidentally published photos of a new Sling TV set-top box discovered by Zats Not Funny show an Android device that allows viewers to switch between Sling’s over-the-top streaming service, over-the-air broadcast channels and even Netflix all with the same remote in yet another effort by Sling parent Dish Network to become a primary destination for cord-cutters.

Photos of the AirTV Player show a blue-and-white box and a voice-capable remote control with dedicated buttons for Sling TV and Netflix, and a Google button that could potentially be used to access the Play Store, which offers movies and TV shows to buy or rent.

Sling has apparently removed the landing page where the author stumbled upon the AirTV Player, but not before photos and a description of the product could be saved.

Here’s what Sling wrote about the AirTV Player:

“Get the live channels you love and the shows you can’t miss. Watch Sling TV on AirTV Player, and enjoy live sports, shows, and movies with the simplicity of an app. With the AirTV Player, cut the cord and keep the TV experience. You’ll have a single platform for watching Sling TV, Netflix, local channels, and more.

AT&T, which acquired longtime sling rival DirecTV last year, launched its DirecTV Now streaming service last month, offering a promotional rate of $35 a month for a 100-channel package, seemingly among the best values offered yet in the brief history of streaming TV bundles. However, the service has been plagued by technical problems in its early rollout.

Sling TV currently offers an entry-level package with 31 channels, including ESPN and CNN, for $20 a month. Its $40 package includes 50 channels, and all offerings have options to add premium channels like NFL RedZone and HBO a la carte. Late last month, Sling introduced a cloud DVR service, allowing users to record live TV shows and watch them on multiple devices later.