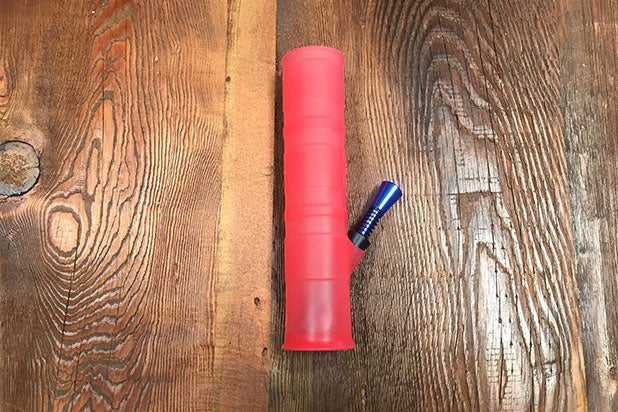 The bong is part of the publicity campaign for the film, which opens on Friday. It stars Dano as a suicidal man named Hank who is about to kill himself when a corpse (Radcliffe) washes ashore. The farting corpse eventually comes to life and helps Hank reunite with the woman of his dreams (Mary Elizabeth Winstead).

No one here at TheWrap’s office will admit to knowing enough about bongs to say if this bong is, you know, usable. nd soft, and the part you put your stuff in is springy, which is kind of neat.

If you have any idea if the bong is any good, please let us know in the comments.

Anyway, “Swiss Army Man” publicists: points for creativity. Most people just send press kits with DVDs. It’s super hard to smoke from those, though they’re great for cutting cocaine on.

Or so we’re told.

At Sundance, A24 acquired North American distribution rights to “Swiss Army Man” after a divisive premiere screening that saw more than 30 walkouts.