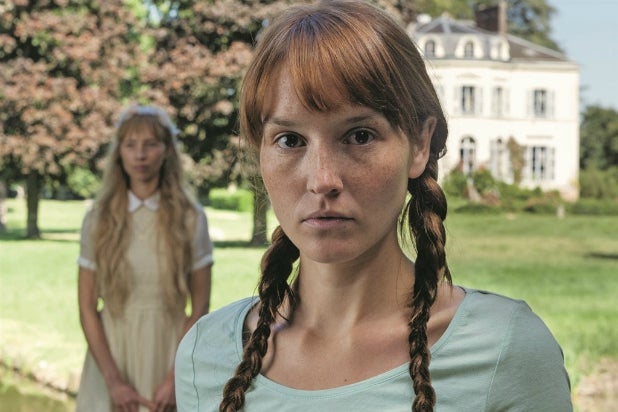 The bravura montage that opens the transgender melodrama “The New Girlfriend” perfectly encapsulates the film’s obsessions with death, sex, and femininity. A pre-Raphaelite blonde is adorned in her wedding regalia — ring, lipstick, dress — then entombed forever in her gold and ivory casket. What follows is the sudden and intense bond between the dead woman’s widower, David (Romain Duris), and her life-long friend, Claire (Anaïs Demoustier).

Written and directed by François Ozon (“Swimming Pool,” “8 Women”), “The New Girlfriend” is a delicate figurine: too quaint to feel necessary in the current climate of ever-bolder representations of trans lives, and yet rescued from disposability by its delicate beauty. Adapted from a 1985 short story by Ruth Rendell, it’s a politically timid work, but an unabashedly emotional experience.

By turns suspenseful, aching, and exuberant, it offers a buoyant tale of self-discovery that’s rooted in questionable modes of mourning. There are no LGBT role models here — only people who know what they’re doing isn’t quite right, but can’t help being true to themselves.

Just a few weeks after the death of Laura (Isild Le Besco) death, Claire is startled to find a look-alike of her dead friend cradling Laura’s infant daughter Lucie — and more startled still to discover that the doppelganger is the widowed David in drag. “You’re a perv,” blurts Claire, feeling betrayed on Laura’s behalf. Still, Claire’s too good a godmother to reveal David’s cross-dressing to anyone, including her doting husband Gilles (Raphaël Personnaz), lest Lucy get caught in the middle of a nasty custody battle between her father and her maternal grandparents.

The uneasy but profound rapport between Claire and David unfurls in a universe unlike any other — one where cell phones and online shopping exist, but where no one’s ever heard of, or thinks to Google, transgenderism. David’s mid-century ideal of femininity is indistinguishable from Douglas Sirk’s (undoubtedly an influence here) — his impractical wardrobe as “Virginia” is full of swishy trench coats, various combinations of sunglasses and convertible-ready handkerchiefs, and a variation of Marilyn Monroe’s bubble-gum-pink gown in “Gentlemen Prefer Blondes.” (David never manages to eradicate his upper lip of a five o’clock shadow, though — a seeming oversight by the make-up team.)

After initially balking at David’s gender fluidity, the lonely Claire embraces her new friend “Virginia,” while finding herself increasingly attracted to men in wigs and eyeshadow. Encouraged in his cross-dressing for the first time in his life, David grows increasingly bold as Virginia — until he decides it’s not enough to play her; he is her. She is her. But the memory of Laura stands in the way, as does the hapless Gilles, as well as an uncomfortable confession from David about why he chose to bury his wife in her wedding dress. As David/Virginia continues to peel away the layers of their identity, the more mired in confusion (and desire) Claire becomes, and the film respects both of their journeys. A deus ex machina contrivance finally settles the score, and yet the hokeyness of the plot device hardly matters, for it becomes an opportunity to poignantly demonstrate how much history the characters have built up between them, all to the accompaniment of Philippe Rombi’s indelibly yearning piano score.

True to its characters to the end, “The New Girlfriend” resolves in what could only be David and Claire’s idea of a perfectly happy ending. La vie est belle, but only when la vérité can come first.