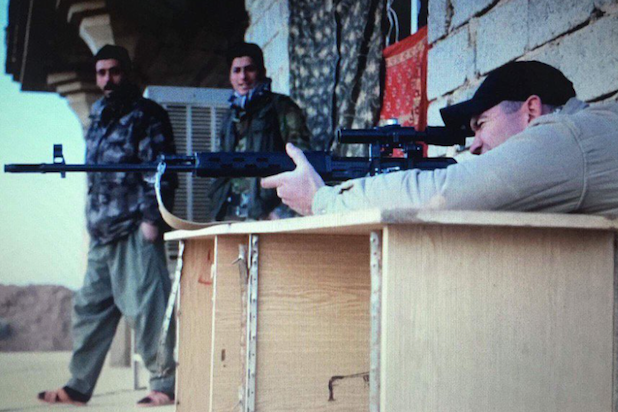 TheBlaze has recalled and suspended the reporter who tweeted an image of himself holding a gun and claiming he fired shot on ISIS, according to Politico.

TheBlaze foreign affairs correspondent Jason Buttrill was reporting from the Mosul offensive in Iraq on Thursday when he claimed to have shot at ISIS, calling it a “major bucket list completed.”

This statement is completely different from a story TheBlaze ran on Thursday that bragged about the incident with the headline, “Exclusive: TheBlaze’s Jason Buttrill shoots at ISIS members and shares footage from the Mosul front.”

It’s unclear why the site changed its tune on the situation, but perhaps it was the backlash Buttrill faced from other journalists. New York Times reporter C.J. Shivers tweeted his disapproval, while reporter Michael Yon emailed the Military Times to condemn the situation.

“If he represents himself as a combatant who also dabbles in writing, he is fine, but if he represents himself as a journalist with a sniper rifle shooting at the enemy, he is off the rails,” Yon wrote. “I did fire a rifle once in very close combat in Mosul. Hand-to-hand combat was going on within spitting distance; the commander was hit three times just close to me. My engagement was defensive. Nobody else was there to fight, so I tried to save our Soldiers. I never engaged in mercenary or offensive action.”

Mercury Radio Arts did not immediately respond to TheWrap’s request for additional comment.