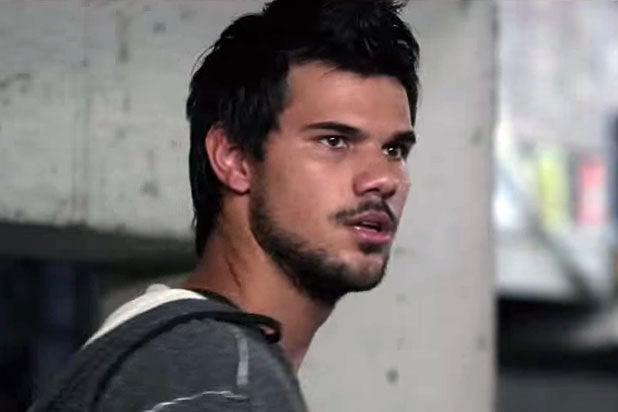 Liberated from the clumsy cage of the “Twilight” films, Taylor Lautner stars in “Tracers,” an agreeable, if minor, thriller directed by Daniel Benmayor. Set in the concrete cliffs and canyons of Manhattan, the film kicks off when bike messenger Cam (Lautner) literally runs into Nikki (Marie Avgeropoulos) as she and a gang of like-minded individuals are racing up, around and through the city by means of the free-running art called Parkour. It’s a meet-cute with injuries — a beat-cute, if you will — and after Nikki leaves Cam a bike to replace the one she smashed up, he tries to track her down.

Cam, of course, has problems of his own: As we’re told in water-torture fashion, drip by drip, he got in deep with the Chinatown mob when his mom was ill in an attempt to keep their house, and now has the kind of debts that, as Springsteen put it so memorably, no honest man could pay. Cam finds Nikki, but he also finds her coterie of parkour-fiend friends and Lost Boys, with Miller (Adam Rayner, “Tyrant”) being the Peter Pan at the apex who uses the crew’s singular abilities to deliver packages and pull off heists thanks to their capacity for feats of acrobatics and stealth. Cam needs money; Cam wants in.

It’s ironic that a film that spends so much time on the free-running philosophy and Zen of Parkour (“Look where the car isn’t,” Nikki advises Cam after he biffs an attempted leap over one) proceeds as if on rails, but that’s essentially what happens. Nikki and Cam are drawn to each other, but she’s with Miller, and after no small amount of will-they-or-won’t-they, they do, albeit in resolutely PG-13 fashion. This betrayal will demand other, more violent ones.

The plot isn’t the point, though; “Tracers” is more about cool, clever, crazy urban action as Cam learns the ins and outs and arounds and overs of Parkour before then using them to commit crime. Director Benmayor is aided substantially by cinematographer Nelson Cragg (“Splinter,” “Halt and Catch Fire”) and editor Peter Amundson (“Pacific Rim,” “Gamer”) in portraying the crew’s travels and travails over the NYC skyline as not only cool-looking but cleanly shot. Now and then, we get GoPro-style you-are-there close-ups and point-of-view shots; on other occasions, it’s lovely long shots of our anti-heroes zipping across roofs and abandoned ships, specks against the city. And the action is shot far better than it is in most Marvel movies, with clarity in the framing and a fluid skill to the cutting.

Rayner invests Miller with the right kind of glowering charisma; he’s everybody’s friend, until he isn’t. Lautner may not have been able to carry something with the budgetary burden of “Abducted,” his prior Lionsgate thriller that plunked him into the middle of more experienced talents like Jason Isaacs, Maria Bello and Sigourney Weaver, but this film’s smaller stakes, lesser-known co-stars and lower budget seem to fit him well. Cam has made mistakes, but he’s also willing to set them right, even when the stakes literally go ballistic.

Screenwriter Matt Johnson does an adequate job, but the one thing worthy of note is how slowly — and skillfully — the violence in this film goes from shoves and punches to automatic weapons and barrages of bullets. The score, by Lucas Vidal, is a suitable mix of beats and notes to propel the action as well. “Tracers” isn’t going to help Lautner leap to the A-List, but it’s an enjoyable journey to the middle.