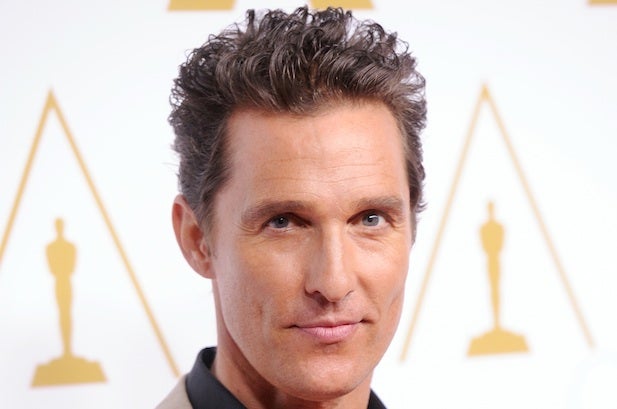 Matthew McConaughey and Jared Leto have answered the same 12 questions about “Dallas Buyers Club” for the last six months, but they aren’t tired of it — they swear.

“I have not found it laborious,” McConaughey told reporters Monday during the annual Oscar nominees luncheon. “There’s a lot to do and a lot of places to be, but I can talk about my experience with this guy Ron Woodroof until the day I die without getting too exhausted.”

McConaughey and Leto were but two of more than a dozen actors and directors who obliged an eager band of journalists, answering questions about their shoes, their dreams and, occasionally, their work. Director Steve McQueen echoed the Texan, telling reporters he welcomed every new opportunity to talk about “12 Years a Slave” because it spread the story of the film’s subject, imprisoned freeman Solomon Northrup.

“To unearth someone like Solomon Northrup, to unearth an American hero, it gives me great pride,” McQueen said, praising the passionate debate about the movie as “like a townhall meeting.” “Slavery was not abolished. There are still 21 million slaves living today.”

Jared Leto matched McQueen’s earnestness with playful banter, cracking  jokes about his agent and a reporter who asked him if he’d lost weight for a role.

“I gained 67 pounds for a little film obviously you didn’t see called ‘Chapter 27,'” Leto said. “It’s not a lot of fun. It’s really bad for your body. I would never gain weight again for a role.”

He and his fellow nominees may feel the same away about stumping for their movies by the end of the month. In the meantime, they are on their A-game. Here are the event’s other highlights:

“[I want people to take away] the emotional experience of the film. We go through adversities every single day of our life. Those adversities are what shape who we are.”

It took Cuaron five years to get this made.

Payne is from Nebraska.

“There’s a lot of disgusting behavior on the screen. We wanted this to be a cautionary tale. We wanted to accurately portray this darker nature of our culture. It was a reaction to what happened in 2008.”

The recession hit Leo hard. He had to drop one of his 768 projects.

“It wasn’t supposed to be a big blockbuster film. It was avant-garde, an existential film about loss and adversity in space.”

“Martin Scorsese is my favorite filmmaker of all-time. ‘Goodfellas’ is the reason I wanted to make movies and dedicate my life to that. I would paint his house if he asked me to.”

“It was always a joke in our office every time I got a script to say ‘do you think we should send it to Alfonso Cuaron?’ ” “I trusted him 100 percent because we had a body of his work as proof. We didn’t know what we were making; it was unknown territory.”

“He’s a director that knows how an actor works. That’s a joy for an actor. He’ll give you time. He really knows where you’re going and where you have to go to get what he wants.”

This explains why Squibb taunted a grave with her vagina.

“David has a way of challenging an actor past what they think thy are capable of. He just keeps on you until you give him what he saw in you.”

In this case, a lot of cleavage.

“Marty has never been a didactic type of director that explains or spoonfeeds to the audience what the ramifications of actions are. He goes in and says ‘I’m not going to judge these characters.’

“The possibility of winning is so insane to me. It seems indulgent to write a speech. I guess I will for the one in a million chance it happens so I don’t sound stupid.”

“This [nomination] took me by surprise. I threw myself at the role. Whenever you do that you are nervous and trepidatious about the result. You’re part unconscious when you’re working deeply.”

This is her sixth nomination.

“To have so many people embrace you and identify with you, that’s the beauty of film. It brings people closer together.”

Except for the woman who asked her about being born in Mexico.

“One of surprising things is we have six nominations for this film, this little film we never thought we’d get made. … I’m gonna celebrate no matter what.”

It’d be a whole lot cooler if he did.

“I’m doing this things I wanted to do as a kid – working with Clint [Eastwood], working twice with David [O. Russell], Cameron Crowe in the fall. To be a part of this kind of things two years in a row, I’m waiting for her to take me away and say ‘what are you doing here?”

We’re asking that too.