“The Twilight Zone” meets “No Exit” in “10 Cloverfield Lane,” a film that spends much of its running time within the close confines of an underground survival shelter. Who’s in there, whether or not they should be, and what’s really happening outside are questions that make up almost all of the plot, and for most of the movie’s 105 minutes, those mysteries are enough to generate tension and suspense amidst the claustrophobia.

Even if this tale might have been better served as a 40-minute short than as a full-length movie, first-time feature director Dan Trachtenberg has cast a trio of actors at the top of their game, and they elevate the material. It’s not easy to engender audience empathy while at the same time keeping viewers guessing as to a character’s true motivations, but these performers skillfully multi-task the script by newcomers Josh Campbell and Matthew Stuecken, which got a rewrite by Damien Chazelle (“Whiplash”).

Aspiring fashion designer Michelle (Mary Elizabeth Winstead, “Scott Pilgrim vs. the World”) tearfully packs up and walks out on a relationship, but after her car goes off the road – in an accident that’s jarringly captured under the opening credits – she wakes up in a knee brace that’s chained to the wall of a cinder-block bunker. Howard (John Goodman) appears and informs her that there has been a devastating attack outside which has rendered the air unbreathable, and that he has saved her life by bringing her to his shelter.

Immediately, we’re presented with a host of questions: Is Howard telling the truth about the apocalypse outside? Is he merely a kidnapper of young women? And if so, why is construction worker Emmitt (John Gallagher, Jr., “The Newsroom”) down there as well? Can Michelle trust Emmitt as an ally?

The biggest mystery of all is, of course, what the heck does any of this have to do with 2008’s “Cloverfield,” which was also produced by J.J. Abrams? 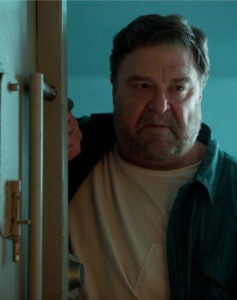 The pleasures of “10 Cloverfield Lane” come mostly from the eventual revelation of these questions, so none of them will be answered here. What keeps the story so involving, however, is that every time Michelle thinks she has Howard, or the situation itself, figured out, the script throws a curveball that suggests the opposite might also be true.

Production designer Ramsey Avery and set decorators Michelle Marchand II and Kellie Jo Tinney accurately nail the look of a bomb shelter that’s been furnished by a Louisiana Wal-Mart; everything from the light fixtures to the shower curtain have a cutesiness that Howard would find comforting. Being trapped there is like riding out the end times in a suffocatingly charmless model home, and the camerawork by Jeff Cutter only accentuates the close quarters.

“10 Cloverfield Lane” ultimately succeeds on the backs of its three performers, all of whom work overtime to add dimension to fairly simple outlines. Winstead’s eyes reveal that she’s always looking for an out and thinking about what move to make next, while Gallagher brings unexpected poignance to a speech about the moment when he gave up on his future.

Goodman, who’s become the kind of character actor who generally gets two or three meaty scenes before disappearing from a movie, revels in all he’s given to do here. Is Howard a dangerous lunatic, or a survivalist who just hit the powerball? Or is he too complicated for an either/or? We’re constantly seeing new sides to Howard, and much of that comes from Goodman playing the audience like a fisherman, alternating between yanking our chain and giving us some slack.

If this were a play, it’s quite possible that the audience would be left guessing as to what really happened and why, but the movie provides answers, which wind up being less interesting than the mystery of it all. Viewers will remember the resolution, sure, but if they look back fondly on “10 Cloverfield Lane,” it will be for the joy of not knowing.