1. “Avatar” Trailer Ain’t All That

I skipped the 15-minute 3D preview because I’d rather get my “Avatar” fix in one sitting in December. My compromise was watching the teaser trailer. On first view, it’s impressive. But second-time around, the irreverent mind turns ever so slightly to, well, jokes. 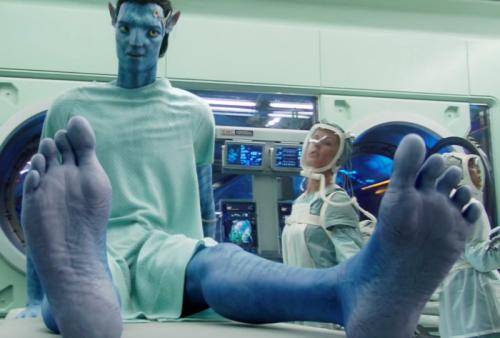 – Where does Sam Worthington’s breathing tube go? Is that giant blue guy in the medical room based on Quentin Tarantino (Avatarantino), right down to the foot fetish?

— Do the Na’vi dudes get their hair braids done by the same stylist who did Hugo Weaving’s in “Lord of the Rings”?

— Why are the members of this Blue Man Group restrained by modesty pouches while Dr. Manhattan swung free and proud?

The serious side to this is that the hype level invites such forensic scrutiny, which makes it feel way-too-familiar way too soon.

My hope is that this is not to “Titanic” what “Bruno” was to “Borat." 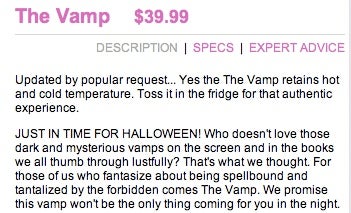 Hmm, how to put this delicately? Let’s just say that adult toy The Vamp promises to bring new, er, buzz to ladies’ (and, I presume, some gents’) lusty R-Pat fantasies. For all intents and purposes, the item appears just like any generic plastic phallus, but the sex-aid spruiker Tantus sets new standards in tenuous linkage by promising: “deathly pale flesh tone reminiscent of the new moon's glow." Needless to say that this product is not official "Twilight" merchandise. 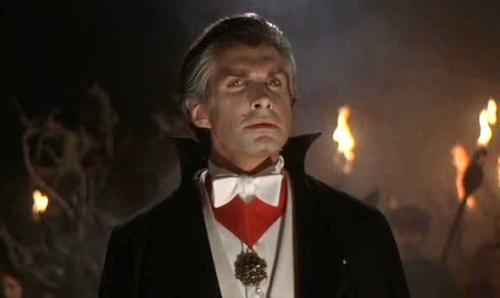 “Twilight” isn’t just giving the adult sex toy industry crazy ideas? George Hamilton — whose skin definitely isn’t “deathly pale flesh” etc. — reckons he’s going to make sequel to his 1979 vamp-comedy “Love at First Bite” called: “Batrimony: Love at Second Bite." The 70-year-old told WENN: “Now I have a find a way to bring my 'Love at First Bite' character into that kind of story and make it funny and not be at all like 'Twilight' and I think I found a way to do that."

A few years ago, Jason Eisener’s wonderful “Hobo With a Shotgun” won the SXSW Robert Rodriguez Grindhouse Trailer Competition to create the best fake-grindhouse “coming attractions” preview. Then he wowed with his follow-up short film, “Treevenge," which won a slew of awards. Now he’s back with “The Number to Heaven," an entry in Fantastic Fest’s Filmmaking Frenzy competition. The rules are simple: keep the film to 30 seconds, feature a monster, feature a kid.

This is seriously twisted. Someone should snap Eisener up. He’s like Peter Jackson, circa “Bad Taste”.

In the past two weeks, my three-year-old daughter and I have been reveling in the animated masterpiece that is “Yellow Submarine." And now Robert Zemeckis, whose CGI efforts have been the dead-eyed “Beowulf” and “The Polar Express," plans to remake it. Why? That trippy tour of the mind/soul/universe is completely of its time and place. As the Fab Four might’ve said, Let It Be.

6 Every Cult U.K. Film Location Must Be Sold!

Last week, I reported on the farmhouse from “Withnail & I” being put up for sale. This week, I discovered that Scotland’s Pennan Inn, which featured in 1983 flick “Local Hero,” had finally been sold after lying empty for two years. So, next week I’m offering Tower Bridge — as seen in the “Thunderbirds” movie, “Love Actually” and virtually every other British flick — for sale on eBay.

7. Down Under Ads Are Downers

What do you think of when you think of Australia? Beaches? Shrimp on the barbie? Beer and blokes in short-shorts playing that strange football game called Aussie Rules? Oddly, those in charge of marketing Down Under to the world seem to think of it as a mystical, artistic and even sinister place. Last year, Baz Luhrmann delivered a couple of decidedly offbeat and downbeat promos.

Now the Victorian state government, promoting the country town of Daylesford, has gone a similar route. So we get the promise of a Fellini-style overindulgence, water sex and baptism, all set to music forever associated with the American South. And “Transformers: Revenge of te Fallen” starlet Isabel Lucas sure is pretty, but last time we saw her she had a Decepticon robo-tail coming out of her butt.

8. Jawas Can Talk, After All

Not only can Tattooine’s little critters talk, they have complex corporate relationships. Or, at least that’s what I’m getting from following Jimmy the Jawa on Twitter.

“Once more picked wrong choice for casual clothes day. Wrapped myself in a bathmat and came as an ewok. Awkward silence in tea room”

“Social club organizing a beach trip? FAIL! A) We see enough sand daily, B) we live on a desert moon & C) no one likes the smell of wet Jawa”

9. Reviewers Shouldn’t Write Spoiler Alert (and Put Spoiler Beside It)

I’d been saving “Orphan” until I had a couple hours free. The trailer looked like creepy fun, it stars two of my favorite actors in Vera Farmiga and Peter Sarsgaard and I’d heard there was a killer twist. So I dutifully avoided all reviews, not wanting my subconscious to work on whatever information I gleaned. And then I made the mistake of reading Eric Lurio’s review of “Ponyo” on Huffington Post — in which, for no good reason, he gave away the twist to “Orphan." He wrote “Spoiler” but put the offending information right next to the word, rather than give us the option of rolling over or having to scroll. Thanks for nothing, dude.

First “The Wolf Man” got bumped out of November and moved to the February dumping ground. There weren’t any great surprises there — it’s no secret the production’s been troubled. (That said, the trailer’s great.) But a Scorsese film getting the same treatment? “Shutter Island” has now moved to February — supposedly because Paramount doesn’t have the funds to mount an Oscar race. Say what now?