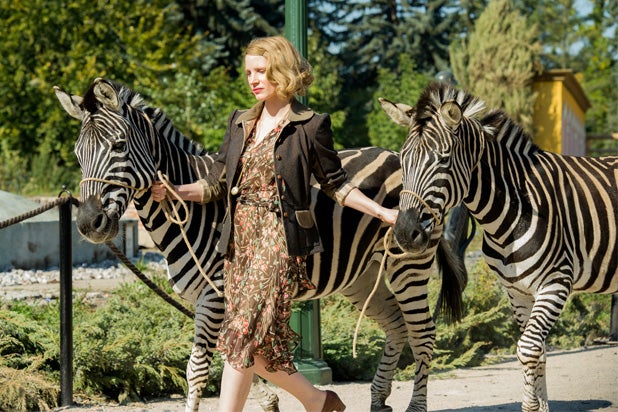 The new movie “The Zookeepers Wife” tells the incredible true story of Antonina and Jan Zabinski, a Polish couple (played by Jessica Chastain and Johan Heldenbergh) who saved hundreds of Jews from the Germans by hiding them in the Warsaw Zoo. The film retells this captivating history without any of the usual excesses that pervade Hollywood productions, instead staying generally true to the facts and accurately portraying life in Nazi-occupied Warsaw.

Here are 10 historical questions you may have asked yourself while watching the movie:

1. Why were bombs dropped on the zoo?

In one of the most traumatizing early scenes of the movie, Antonina’s idyllic bicycle ride through the Warsaw Zoo is interrupted by the roar of planes overhead. Soon bombs descend on the zoo, exploding amidst panicked animals and mangled cages. World War II had begun. The German invasion of Poland is often boiled down to false stereotypes (for the record, Polish cavalry did not attack German tanks head on).

In reality, September 1939 saw pitched fighting as Poland was invaded by Germany from three sides on September 1, followed by an invasion by the Soviet Union on September 17 from the East. During the September Campaign, the aerial bombardment of Warsaw was ferocious. It is estimated that more Poles died in the bombing of Warsaw in 1939 than Germans in the infamous 1945 bombing of Dresden. Today few realize the extent of the carnage that the September campaign wrought on Poland, and Warsaw in particular. By the time Warsaw capitulated, 40 percent of the city’s structures were damaged, and 10 percent were destroyed.

2. Why were Jews placed in ghettos?

Nazi Germany’s conquest of Europe resulted in the implementation of anti-Semitic Nazi policies in areas under German control, including in occupied Poland. The policies, which began with a requirement to wear special armbands and limiting what time of day Jews were allowed outside their homes, quickly expanded and soon the Germans were forcing all Polish Jews to relocate into ghettos. Ghettos were segments of a city, usually fenced or walled off from the rest of from the outside world.

Jews were forbidden to leave the ghetto, and Germans created conditions within these ghettos that made normal life impossible. Jobs were sparse, food scare and medical care limited. This led to poverty, hunger, rampant illness, overcrowding and harsh living conditions. Tens of thousands of Polish Jews died living in these ghettos. Hundreds of thousands more were forcibly deported to Nazi German Extermination Camps. This was the case of the Warsaw Ghetto, from which Antonina and Jan Zabinski smuggled Jews out from.

3. What were the risks associated with helping Jews in Nazi-occupied Poland?

In occupied Poland, the Germans considered any sort of aid to Jews, from providing extra food to smuggling them out of the ghetto, to be a capital offense punishable by death. This was not the case everywhere in Europe. Historian Timothy Snyder estimates that more Poles were executed for aiding Jews in individual districts of the General Government [occupied Poland] than in entire west European countries. Oftentimes Polish gentiles who helped Jews were not only risking their lives, but the lives of their loved ones as well. This was the tragic case of the Ulma Family, documented in the newly opened Ulma Family Museum in Markowa, Poland. On March 24, 1944 the Germans discovered that the Ulma Family was sheltering eight Jews in their home. German soldiers then proceeded to execute Jozef Ulma and his pregnant wife Witkoria, as well as their six children ages 2-8 for this “crime.”

It is for this reason that we see Antonina begging her son Rys to escape from the Zoo. Antonina had become convinced that her underground rescue operation was compromised and that the Germans were preparing to search the Zoo for Jews. As she quickly evacuated the Jews from the Zoo to a safe location, she insisted that her young son escape with them, “Get in the truck Ryszard!” She sought to protect her son from any German retribution for her “crime.”

4. Why did Antonina dye the hair of some of the Jews she was rescuing?

Of the close to 300 Jews who escaped from the Warsaw ghetto thanks to the aid of the Zabinskis, only two did not survive the war. In “The Zookeepers Wife” there is a scene where a woman and her elderly mother are escorted out of their safe house and executed by the Germans. When Antonina learns about this she asks, stunned, whether it was because of the color of their hair. This seemingly innocent question had real life repercussions. Antonina had dyed the women’s hair so that they could better hide in plain sight. However what may not be so obvious to American viewers is the great difficulty associated with hiding Jews during the war.

Many today struggle to understand some of the very noticeable differences that distinguished Poles and Jews in 1930s Poland. In a survey conducted in Poland before the war, only 12 percent of Polish Jews described Polish as their native. What did this mean in reality? That not all Polish Jews spoke Polish fluently, and even some of those who spoke Polish did so with an accent. Such differences, in addition to that of hair color or other physical features, made it very hard for Jews to survive detection outside the ghetto walls.

5. What was the scale of the help Polish Jews received during World War II?

As “The Zookeepers Wife” portrays, no such rescue operation could have been carried out without the support of countless individuals. In fact, scholars estimate that in order to save a single Jew in occupied Europe, the cooperation of ten individuals was required. This holds true in the case of the Zabinskis, where the support of the Polish Underground and numerous individuals was critical. From the men who drove the Jews from the Zoo to other safe houses across occupied Poland, to the women who made counterfeit documents in the back of a bakery, a whole underground network of operatives, part of the Polish Home Army, was involved in helping the Jews rescued by the Zabinskis.

Historian Gunner S. Paulsson calculated that in order for the 11,500 Jews who survived the war in Warsaw to be saved, 70,000-90,000 non-Jews must have been involved in the effort. Additionally Poland was the only country in occupied-Europe were a special organization was established with the explicit aim to save Jews. Zegota, also known as The Council to Aid Jews, was established by the Polish Government in Exile as a means to helping Jews in hiding. One of Zegota’s most known members was Irena Sendler, who helped smuggle over 2,000 children out of the Warsaw ghetto.

6. In one scene Antonina describes the sky as being filled with ash, what is going on?

As explained previously, the Germans deported Jews from ghettos to extermination camps. In the case of Warsaw, mass deportations to Treblinka began in the summer of 1942. By April 1943 only 60,000 of the initial 400,000 Jews were left in the Warsaw ghetto. When the Germans started deporting the remaining Jews, some decided to resist, launching an uprising. For almost a month, Jewish fighters battled with German forces in what would become known as the Warsaw Ghetto Uprising. Since many of the fighters were hiding in buildings and bunkers, the Germans leveled the ghetto, systematically destroying all the buildings. Whole city blocks burned as the sky filled with flames and thick smoke. This was the scene Antonina was witnessing from a distance. Ash from the burning ghetto was being blown across the city.

7. Who was Janusz Korczak?

Janusz Korczak was a Polish-Jew who was well known before the war because of the children’s books he authored. A doctor by training, Korczak ran an orphanage in Warsaw. After the German invasion and occupation Korczak was forced to move his orphanage into the ghetto. Due to Korczak’s fame and reputation he received offers from the Polish underground to be smuggled out of the ghetto and hidden. He did not accept. As we see in “The Zookeepers Wife,” Korczak refused to abandon his orphans and is said to have cheerfully led them as they marched to the trains that would take them to their death. Today Korczak is remembered as a symbol of compassion and sacrifice, never abandoning his children even in the face of certain death.

Also Read: PewDiePie Apologizes for Anti-Semitic Jokes: 'I Admit the Joke Itself Went Too Far' (Video)

8. Why do the Zabinski‘s refuse to allow their son to leave the Zoo?

No one was safe during the German occupation of Poland. Although the Zabinskis were not Jewish, that did not mean that they had no reason to fear the Germans. During World War II Nazi terror was random and omnipresent. Non-Jewish Poles were regularly seized on the streets and sent to forced labor camps. The Germans would simply close a street from both ends and force everyone on the street into trucks and take them away during so-called “round ups.” Polish children with blue eyes and blond hair were kidnapped from their parents and sent to Germany in order to be raised as Germans. Historian Norman Davies describes Nazi terror as “much fiercer and more protracted in Poland than anywhere in Europe.” Over two million Polish civilians died as a result of Nazi German policies and oppression during World War II.

9. What battle did Jan fight in during the movie?

Jan Zabinski served in the Polish underground Home Army. This formation, loyal to the Polish Government in exile in London, was composed of close to a half million soldiers. It is considered to be one of if not the largest underground organization in occupied Europe during World War II. On August 1, 1944 the Home Army launched the Warsaw Uprising, the largest underground operation in all of World War II. With the Soviets approaching Warsaw, the Poles believed they could liberate the Polish capital themselves. This would have been not only a military victory, but more importantly a political ones, as it would have given the Poles control of Warsaw before the communist Red Army arrived.

Although determined, without outside support the lightly armed Polish partisans were doomed to fail. However, once the Uprising began, the Soviet offensive halted. Air drops of supplies were few and far between on account of Stalin’s refusal to allow British and American planes from refueling on Soviet airfields. For 63 days the Polish Home Army fought relentlessly against the German forces, ultimately capitulating. The Warsaw Uprising claimed the lives of over 200,000 Varsovians and resulted in the absolute destruction of the city.

10. What are Righteous Among the Nations?

At the end of the movie we learn that Antonina and Jan Zabinski were declared Righteous Among the Nations. This title, bestowed by Israel’s Yad Vashem Institute, recognizes individuals who helped save Jews during World War II. Currently there are over 6,700 Polish men and women recognized as Righteous, over a quarter of all recognized helpers. However not all those who brought aid are recognized due to the strict guidelines that must be followed when granting the title Righteous. In countless cases, the German occupiers uncovered or were informed about Jews in hiding which resulted in their death and the death of the Poles who were hiding them.

Such histories were not always thoroughly documented, which means that the official Righteous numbers represent only a fraction of the aid rendered to Polish Jews during World War II. In fact there are almost 1,000 cases of Poles executed for helping Jews in hiding, and nearly all of them are not included in the Yad Vashem total. This is one of the reasons why the From the Depths foundation established the Antonina and Jan Zabinski Award. The award is presented to Poles who helped save Jews during the Holocaust but have not been honored by Israel’s Yad Vashem Institute.

Matthew Stefanski is the Press, Media and Public Relations Advisor at the Embassy of the Republic of Poland in Washington, DC.