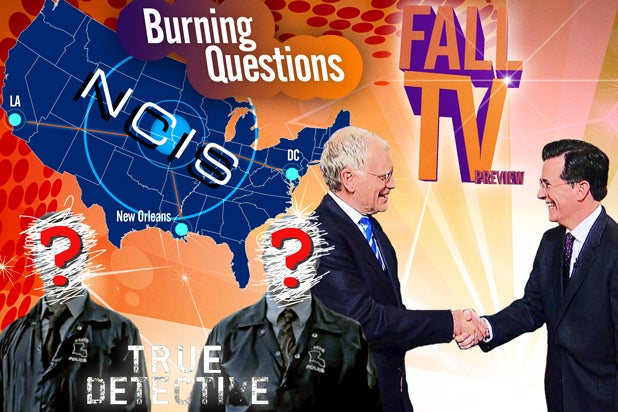 No one would have guessed at the start of last season that NBC would end 2013-14 on top, that shows starring Robin Williams and Michael J. Fox wouldn’t last the season, or that Stephen Colbert would be named as David Letterman’s replacement.

Nothing is certain in today’s broadcast landscape, which is fast ceding ground to cable and online. As goes William Goldman’s great line about the movie industry, “Nobody knows anything.”

It’s true, we don’t have the answers. But we do have plenty of questions. They range from the very general (What’s next, NBC?) to the very specific (Will people like “Jane the Virgin”?).

The only thing they have in common is that any answers anyone offers right now are likely to look silly in a year. Here are our burning questions for the 2014-15 season.

How Grown-Up Are Broadcast Viewers? TV is riddled with procedurals in which wisecracking detectives crack open-and-shut cases in an hour. Do viewers broadcast viewers have the patience for high-quality, slow-burn crime dramas like Fox’s “Gracepoint” and ABC’s “American Crime”? Both focus on the agony and real frustrations of solving horrific crimes, and “American Crime” adds difficult questions about how racism undercuts the justice system. Both shows bear more resemblance to real life than most episodes of “CSI,” but real-life isn’t always fun to watch.

Can Viewers Absorb More “NCIS”? You can’t fault CBS for capitalizing on the massive success of its police procedural.
The network is rolling out yet another iteration of the franchise, “NCIS: New Orleans,” which stars “Quantum Leap” alum Scott Bakula and brings the crime-investigation to the Big Easy. This will make for three “NCIS” series on the air, and time will tell if viewers welcome more, or if it turns out to be too much of a good thing.

Will ABC’s Diversity Push Pay Off? ABC is taking a simultaneously funny and serious look at race with the sitcoms “Black-ish,” “Cristela” and “Fresh Off the Boat.” They’re all hard to categorize — the pilot for “Fresh Off the Boat,” about Taiwanese immigrants, has probably the best classic hip-hop soundtrack of any show ever. Talking about race may not sound fun, but all the shows smartly acknowledge stereotypes while subverting them. Best of all, people of color are behind the camera, not just in front of it. Without American demographics changing fast, ABC may be ahead of the curve.

What’s Next for Fox’s Ex-Boss? Since leaving at the end of last season, Kevin Reilly has been spending his time off overseas with his family. He’s told TheWrap that his search for a new job is just beginning in earnest. The industry could use him back. He’s one of the most imaginative executives in broadcasting, and one willing to take big swings. He also loves digital, which could mean his next job will be very different from his last one.

Will Ratings Be Better? Nielsen says it will be ready for multi-platform ratings this fall, which should better track viewers who don’t watch their favorite shows on traditional TV. Networks have begged for better ways of counting those who watch shows online, and hope this will bring them closer to the day that all screens are counted equally.
Also read: Matthew Weiner Has Already Heard Your ‘Mad Men’ Ending
Will Big Shows Stick the Landing? Some of our favorite shows are ending this season, including “Sons of Anarchy,” “Boardwalk Empire,” and “Mad Men.”The question is whether they’ll sew things up perfectly, like “Breaking Bad,” or disappoint many fans, as did “True Blood” and “How I Met Your Mother.” You can do this, Don Draper.

Can NBC Hang On to No. 1? NBC finished last season in the catseat — at the top of the 18-49 demographic — after years of lagging behind its rivals. It owes much of its success last year to “Sunday Night Football,” “The Voice” and “The Blacklist.” Can it hang out? It’s still betting big on both shows, while trying to hard to stay competitive on Thursday nights, a major weak spot. Things will be especially tough as CBS starts airing its own primetime NFL football on Thursdays.

Will David Letterman Go Out Big? David Letterman remade late-night comedy, and talk shows. He inspired the generation that followed him. And BuzzFeed should pay royalties to his Top 10 lists. Frankly, we don’t have room here to list all of his accomplishments. With nothing to prove, Letterman may opt to ease into retirement without a lot of fanfare. But he could also go out with a massive retrospective reminding us how brilliant he’s been for three decades.

Also read: NBC’s ‘The Blacklist’ Acquired by Netflix for $2 Million Per Episode

Will Viewers Embrace the Real Stephen Colbert? Stephen Colbert’s xenophobic blowhard character, “Stephen Colbert,” is comic genius. But he isn’t coming to CBS when the real Colbert takes David Letterman’s place on “The Late Show.” Some of Colbert’s biggest fans rarely see him playing himself, so it will be fascinating to watch him drop the facade for broadcast TV.

No, Really: Who’s Doing “True Detective”? Critics from here to Carcosa went bananas for “True Detective” when it debuted, praising Matthew McConaughey, Woody Harrelson and Michelle Monaghan‘s acting, Cary Fukunaga’s direction, and Nic Pizzolatto’s scripts. But now just a little bit of the shine is off the Yellow King’s crown: Only Fukunaga took home an Emmy, some fans have accused Pizzolatto of plagiarizing Thomas Ligotti (Pizzolatto denies it), and it seems like it would be impossible to match the excellence of the Season 1 cast. The biggest question around the mystery is whether it can match itself. We hope so.
And Who’s Doing “Fargo”? FX’s anthology will go several decades back in time next, which means it, too, is getting a new cast. Who? You’re killing us. Of course, that’s kind of what the show is about.
Will Mainstream America Give It Up for Telenovelas?

The CW is asking its young audiences to embrace extreme soap opera tropes with “Jane the Virgin,” based on a Venezuelan hit. The series follows a young woman, determined not to have sex before marriage, who is accidentally artificially inseminated. Americans love daytime soaps, but will they embrace primetime melodrama? The CW thinks a primetime telenovela story can play as well in Cayucos as it does in Caracas.
Also read: 15 Burning Summer TV Questions: Will Movie Stars Connect, Can ‘Duck Dynasty’ Stay Afloat,  Who Will Save Fox?
Will ABC’s Split Seasons Pay Off? Last fall, ABC responded to criticism that it airs to many reruns during the season by running several of its dramas straight through, just like cable shows do. But the network still suffered a slew of canceled dramas. This year, it will continue its strategy with the new dramas “Agent Carter,” “Galavant” and “Astronaut Wives Club.” Will viewers appreciate it?