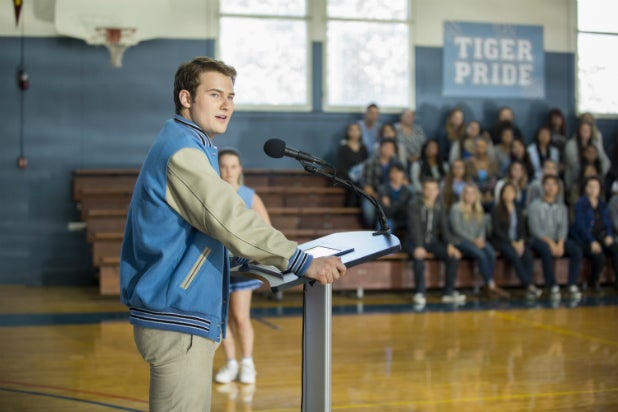 “13 Reasons Why” showrunner Bryan Yorkey hinted at what viewers could expect to see in a second season. In an interview with Entertainment Weekly, he specifically highlighted the Jessica and Bryce story, which didn’t have a full conclusion at the end of Season 1. (Beware of Season 1 spoilers ahead!)

Jessica was just coming to terms with the fact that Bryce raped her and as far as viewers saw, there wasn’t a lot justice in regards to that. However, Yorkey said that storyline will continue in Season 2, hopefully with some consequences for entitled football captain Bryce.

“I want to do Jessica’s story the deserved justice of following her as she goes back to school, as she tries to begin to recover from what happened to her, because it’s something that millions of young women go through,” Yorkey said. “And also [I want to] see somebody punch Bryce in the face.” (Of course, Clay did strike him toward the end of Season 1 — but quickly got overpowered by the villainous jock.)

Yorkey also expanded on how Season 2 will continue after Hannah-based voiceover and cassette tapes dominated Season 1. There will be some changes.

“Yeah, we’re definitely still weaving past and present,” Yorkey explained. “And there’s voiceover in every episode, but the voiceover is no longer Hannah. The voiceover and the stories that are being told bring us into the past and back to the present much in the way that Hannah’s voiceover did in Season 1.”

There will also be another piece of technology that plays a part in the new season, like the cassette tapes did in Season 1, although Yorkey didn’t clarify what that was.

Perhaps a discman? (We kid.)

Also Read: Every '13 Reasons Why' Character Ranked, From Most to Least Redeemable (Photos)

There were a lot of loose threads at the end of Season 1, leaving many to believe that a second season was possible. With the news that Netflix renewed it for a new 13-episode season set to debut in 2018, viewers will get to see those developments.

For example, will stalker Tyler do something with all those weapons he has stashed away? Who, if anybody, will be held responsible for Hannah’s death, especially after the trial goes through? What’s going to happen to Alex? As Yorkey has said, even though we now know the intimate details of Hannah Baker’s life and death, there are still stories to address.

You can read the full interview here.