The strangest, happiest indie success story of the year came to Los Angeles Thursday night, when a movie made for $15,000 had its L.A. premiere a week after opening in one theater in New York and grossing … just about $15,000.

“Breaking Upwards,” a terrific little romantic comedy about a pair of Manhattan twentysomethings who decide to take “off days” in their relationship, held its premiere and party at the Silent Movie Theater on Fairfax, just down the street from the Sunset 5, where the film opens on Friday.

Olivia Thirlby, who’s in the movie, was in attendance; so were Anne Hathaway, Josh Hartnett, Joshua Leonard (“Humpday”), Johnny Galecki (“The Big Bang Theory”) and Gillian Jacobs (“Community”), who aren’t. 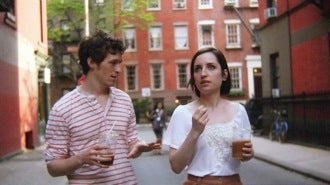 At the beginning of the evening, producer/writer/actors Daryl Wein (who also directed) and Zoe Lister-Jones (left) stood in front of a packed house to introduce the film that had been inspired, Wein said, by “a difficult time” in his and Lister-Jones’s relationship.

“We never expected…it to be the number two per-screen average last weekend after ‘Clash of the Titans,’ and right above Tyler Perry,” he added. “That was awesome.”

It was also unexpected for a film that was made with friends, crew members recruited on Craigslist, and a few known actors (Thirlby, Andrea Martin, Peter Friedman) who didn’t care about the paycheck. Wein served as the director, co-writer, co-producer, editor, lead actor and occasional AD; Lister-Jones was co-writer, co-producer and lead actress, plus she sometimes cooked for the cast and crew to save money on craft service.

When the film was completed, IFC bought it and planned a video-on-demand release – but, said Wein at the party that followed the Thursday screening, he and Lister-Jones were determined to get their films into theaters as well.

“They were going to do it VOD, but we begged them to give us a theatrical release,” he said. “We said, ‘Give us the money you’d spend on the VOD, and we’ll do our own viral marketing campaign.’”

The result, after videos on funnyordie.com, an aggressive presence on social networking sites and a round of film festivals, was enough attention to make the film’s New York release a successful one. The key was a New York Times story that detailed the production, and gave the film remarkable visibility for such a low-budget production.

“We always had faith in the movie, but you never know what’s going to happen,” said Wein. “Especially with critics, you can’t predict anything.”

For the most part, those critics have been kind: the New York Times said the film “feels as new as anything a tiny budget and a boatload of talent could produce,” the Village Voice called it “smart and lively and, in the end, quite affecting,” and Friday’s Los Angeles Times dubbed it “an engaging DIY film.”

Thursday night, the fresh, low-key film won more raves from those in attendance, who then adjourned to the Silent Movie Theater’s rear patio for an equally DIY reception.

The snacks included popcorn, Oreos and Tootsie Roll Pops – because let’s face it, when you’ve made your entire movie for 15 grand, there’s no point in springing for expensive catering at the premiere.

"Breaking Upwards" opens on April 16 in San Francisco, and is available on demand through IFC.