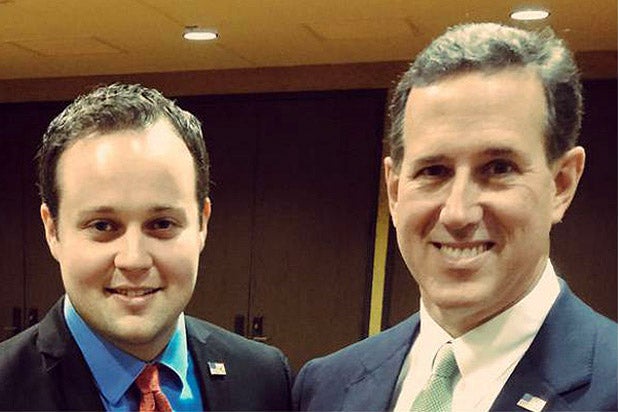 The “19 Kids and Counting” star, a former welcome member in Republican circles, has fallen from grace following last week’s revelation that he had been accused of sexually molesting multiple underage girls, including some of his sisters.

In addition to his participation in the TLC program, Duggar held a position with the Family Research Council — which he resigned from last week, after the scandal broke. Duggar had served as executive director of FRC Action, the Council’s legislative affiliate.

As such, he had ample opportunity to rub elbows with GOP bigwigs – a Tumblr account devoted to the topic is filled with pictures of Duggar posing with high-profile Republican figures including Sarah Palin, Rand Paul, , Jeb Bush and RNC chairman Reince Priebus.

But this week, conservative figures have begun to offer Duggar harsh words instead of handshakes.

On Wednesday, conservative CNN commentator Ben Ferguson delivered a harsh rebuke of Duggar and his family. He also had choice words for former Arkansas governor and current Republican presidential candidate Mike Huckabee, one of the few conservative figures to actually publicly support Duggar since the scandal broke.

“At this point, anyone who stands [with] them I think would be irresponsible; it sends the wrong message,” Ferguson asserted on CNN.

He added, “You have a family that cared more about protecting the brand of this family and being a total fraud than they did about the welfare of children that were being abused by one of their own.”

On Thursday, more criticism came — this time from former Pennsylvania senator Rick Santorum, who’s also thrown his hat into the ring for the 2016 presidential election.

Santorum did not mince words in an interview with George Stephanopoulos on ABC’s “Good Morning America.”

“I was sickened by it. I was just sickened by it,”  Santorum said of the molestation scandal. “I pray for those girls in particular… To have gone through that is… just hard to think about.”

The condemnation was a far cry from 2012, when the Duggar family endorsed Santorum in his presidential bid.

Suffice to say, another endorsement will probably not be forthcoming. Nor would it be welcomed.

Last week, after news of the molestation allegations broke, Duggar issued a statement admitting, “Twelve years ago, as a young teenager, I acted inexcusably for which I am extremely sorry and deeply regret. I hurt others, including my family and close friends.”

Duggar added. “I confessed this to my parents who took several steps to help me address the situation. We spoke with the authorities where I confessed my wrongdoing, and my parents arranged for me and those affected by my actions to receive counseling. I understood that if I continued down this wrong road that I would end up ruining my life.”

Since then, TLC has pulled the show from its schedule, though it has not yet officially canceled the series. “19 Kids and Counting” has also seen a pile of advertisers, including Walgreens and Kohl’s yank their support from the show.

Time will tell how many more sponsors and politicians will pull their support from Team Duggar by the time the scandal has run its course.