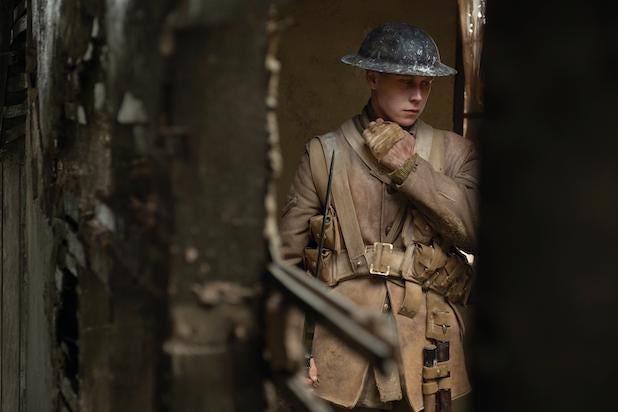 Universal could not have set it up any better for the wide release of Sam Mendes’ “1917.” After grossing over $2 million from a two-week limited release run, the DreamWorks-produced World War I film is set to go wide on Friday days after winning Best Picture and Best Director at the Golden Globes.

The most recent round of tracking has the awards contender projected to earn around $25 million this weekend, with Universal eyeing $20 million. But the Globes victory has kicked audience awareness and word of mouth into overdrive, and a $30 million-plus start is very possible if interest expands beyond its core demographic of audiences over age 55. Online ticket sellers are already reporting a big spike in advance sales, with Fandango reporting that “1917” was second only to “Star Wars: The Rise of Skywalker” in sales on Monday.

The Globes recognition for “1917” was a surprise among many viewers, since Mendes’ film beat out the $1 billion hit “Joker” and Netflix films “The Irishman” and “Marriage Story,” all of which have won over audiences. Some viewers even wondered on social media how a film that isn’t even out nationwide yet was able to surge past films that have been rolling in acclaim for months.

Also Read: BAFTA Nominations Put '1917' in the Awards Spotlight Again - and 'Joker,' Too

After taking a write-down on the widely panned “Cats,” Universal would love to rebound with some success with a film that could become part of the zeitgeist all the way up to Oscar Sunday. It would also be a godsend for movie theaters, which were struggling this time last year with a lack of new films that interested moviegoers. A late awards contender with legs could get the 2020 box office off to a strong start.

“1917” stars George MacKay and Dean-Charles Chapman as two British WWI soldiers given less than 24 hours to reach a planned attack on retreating German forces and stop it before they fall into an ambush that could kill hundreds. Colin Firth, Mark Strong and Benedict Cumberbatch also star in the film, which has a 89% Rotten Tomatoes score.

Also going from limited to wide release is “Just Mercy,” the legal drama starring Michael B. Jordan, Jamie Foxx and Brie Larson. It is looking at a more modest wide opening of $7-10 million, but also comes in with overwhelming audience praise from its L.A./N.Y. platform release. CinemaScore polls yielded an A+ from all demographics, and its racial justice subject matter could make it a big hit with African-American audiences.

“Just Mercy” tells the true story of Bryan Stevenson (Jordan), a Montgomery-born Harvard law graduate who gives up lucrative job offers to become a defense attorney in a Deep South still rampant with prejudice. As one of his first cases, he becomes the pro bono representative for Walter McMillian (Foxx), a man wrongfully imprisoned and sentenced to death for the murder of a white woman. Destin Daniel Cretton directed the film and co-wrote it with Andrew Lanham.

In addition, two other new films are getting release: the Paramount comedy “Like A Boss” and the Fox suspense film “Underwater.” “Like A Boss” is looking at a solid $10-12 million opening with the hope of getting strong word of mouth from female moviegoers heading into MLK weekend. “Underwater,” meanwhile, is looking like it will drown against tougher competition with an opening of less than $9 million.

“Like A Boss” follows two friends (Tiffany Haddish and Rose Byrne) whose friendship is tested when their financially struggling cosmetics company gets a buyout offer from domineering multi-millionaire Claire Luna (Salma Hayek). Miguel Arteta directed from a script by Sam Pitman and Adam Cole-Kelly.

“Underwater” stars Kristen Stewart as the member of an underwater research team in the fight of their lives after an earthquake threatens to destroy their laboratory. William Eubank directed from a script by Brian Duffield and Adam Cozad. Both “Underwater” and “Like A Boss” do not currently have Rotten Tomatoes scores.