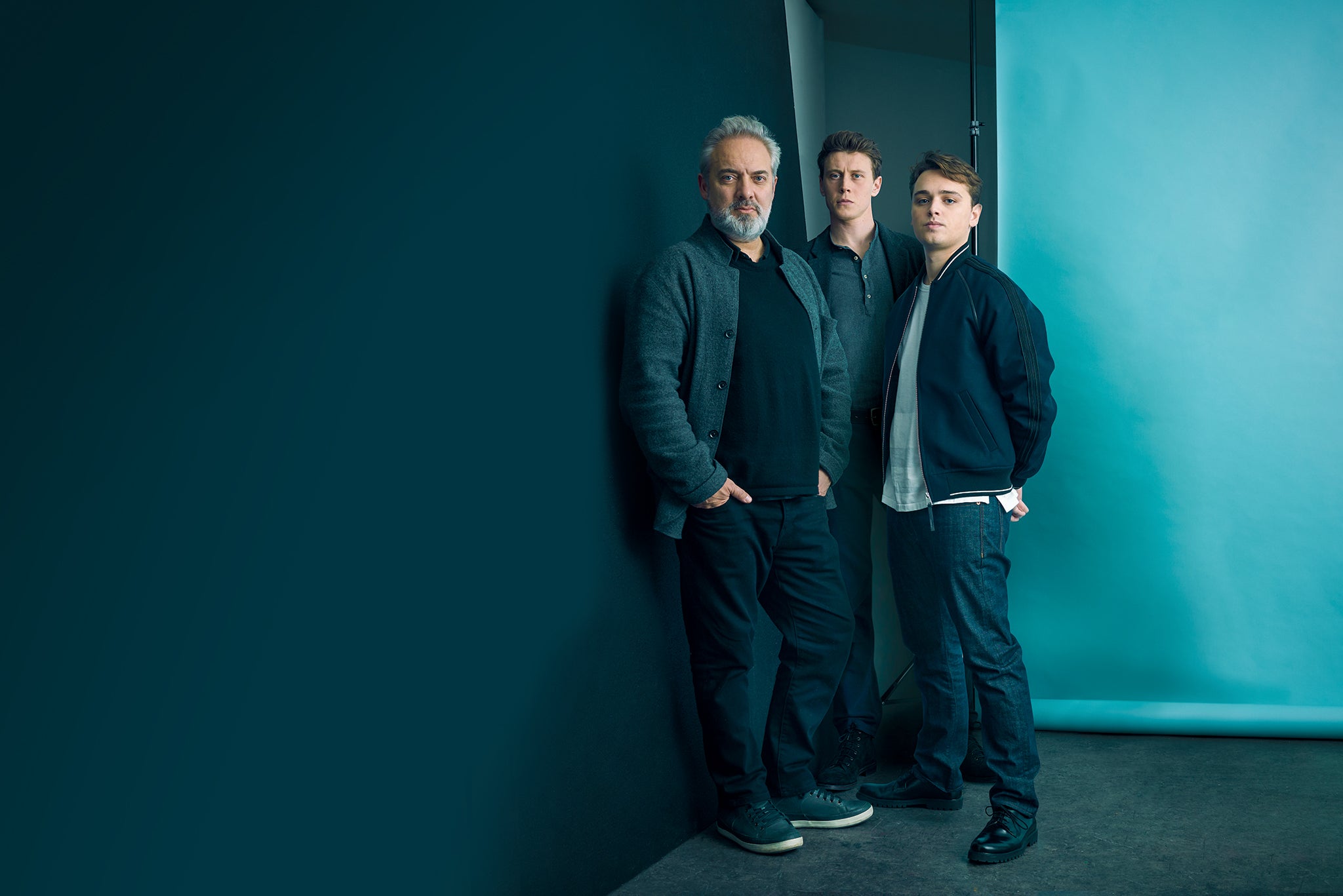 A version of this cover story on “1917” first appeared in the Oscars Nominations Preview issue of the TheWrap Oscar Magazine.

Sam Mendes began shooting “1917” on April Fool’s Day, 2019 — “not inappropriately,” the director said of the start date for a World War I epic that he’d decided early on needed to look as if it unspooled in a continuous two-hour shot. And yes, the concept may have been foolish, but the result is nothing short of remarkable.

Telling the story of Schofield (George MacKay) and Blake (Dean-Charles Chapman), two young World War I soldiers sent on a dangerous mission to deliver a message that could save 1,600 British lives, Mendes created an immersive experience that puts the audience in the trenches and simultaneously delivers a technical marvel and a wrenching emotional experience. While the film actually contains dozens of cuts, they don’t show–and more to the point, they don’t really matter, because the whole purpose is to go on a journey with these two young men.

Written by Mendes and Krysty Wilson-Cairns and made with the help of key collaborators that included cinematographer Roger Deakins, editor Lee Smith, production designer Dennis Gassner and composer Thomas Newman, “1917” entered this year’s awards race late but with a bang. Universal screened the film three times for voters and press in New York City on Saturday, Nov. 23, all of the screenings followed by Q&As with the cast and crew, and then flew everybody to Los Angeles overnight for four screenings in four different theaters in L.A. the following day. All of those included Q&As as well.

Since then, Mendes and his cast and crew have been on the go, mostly in Europe. By the time he talked to TheWrap from London, Mendes was fighting off a nagging, dry cough and sounding exhausted but undaunted. 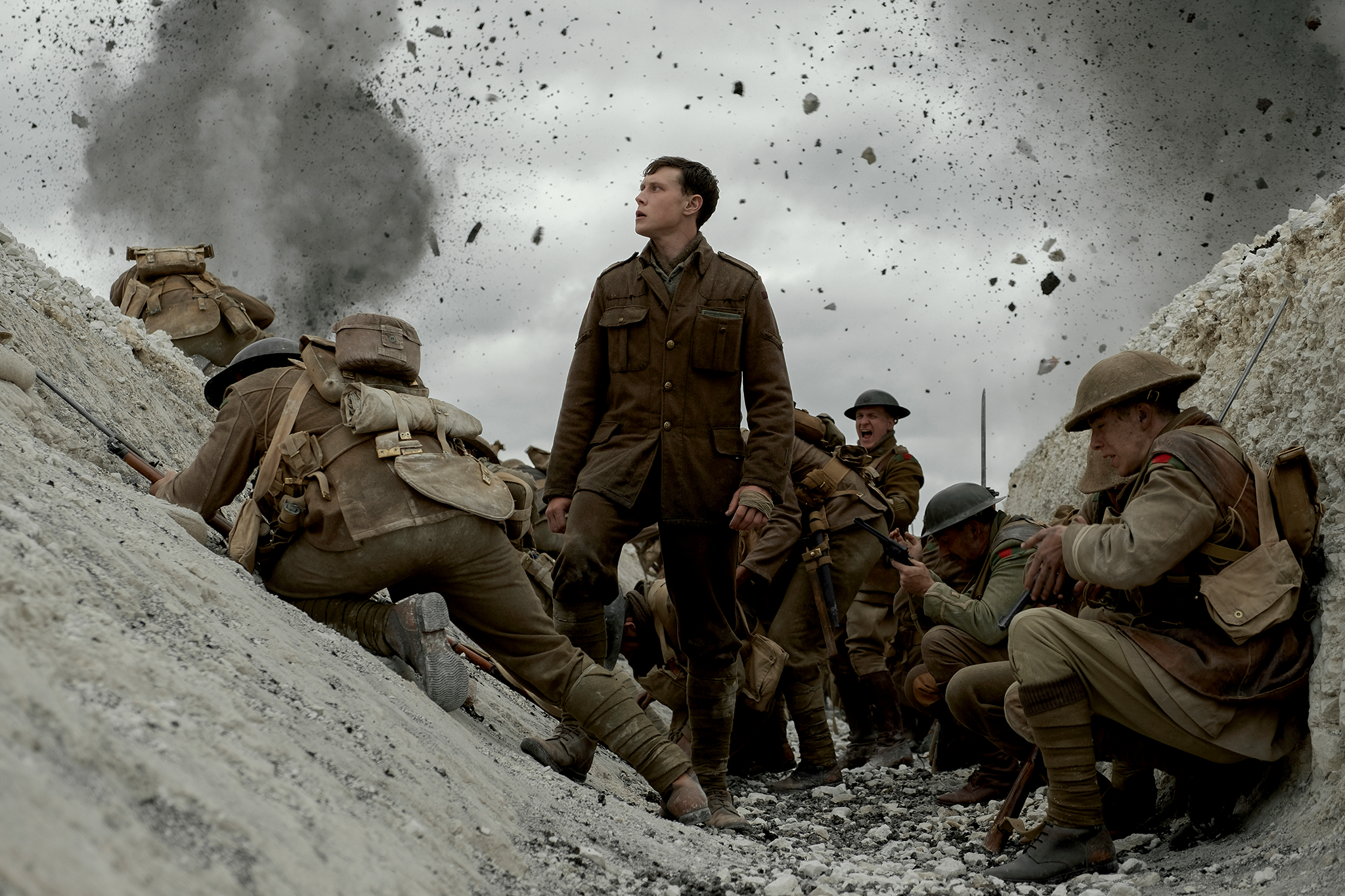 Sam, I get the feeling you’ve been running ragged since you first screened this movie — or maybe since you started to make it.

SAM MENDES You know what? You’re right. It has been nonstop. Once upon a time, I made a movie where I finished it in good time, had a bit of a holiday and was nicely refreshed to talk to the press. But the last three movies — this and the two Bond movies (2012’s “Skyfall” and 2015’s “Spectre”) — I literally finished days before the first press screening. This is the new normal for me.

I know this film sprang from stories that your grandfather told you about his days as a messenger in World War I — but did you just get the setting and the idea of the messenger from him, or were there specific stories of his that made it into the film as well?

MENDES It was that one image of him carrying a message. There are no specific stories from my granddad, but it would never have happened if he had not told the stories. None of his stories are about heroism or bravery — they are all about how lucky he was to be alive, and how random it was, how thin the line was between those who lived and those who died. That is the thing that remains in the film.

We catch glimpses that tell us a little bit about the past of your two main characters, but their prewar lives are never discussed in any detail. Did you have complete backstories in your head as you were writing the script?

MENDES Absolutely. You have to work out what the iceberg is if you’re just going to show the tip. Krysty and I knew exactly who they were, where they came from, how old they were, how long they’d been out there, how much fighting they’d seen, which part of England they came from, which schools they went to, which pubs they’d drink at. You have to do that in order to write a character that has some sort of inner life. 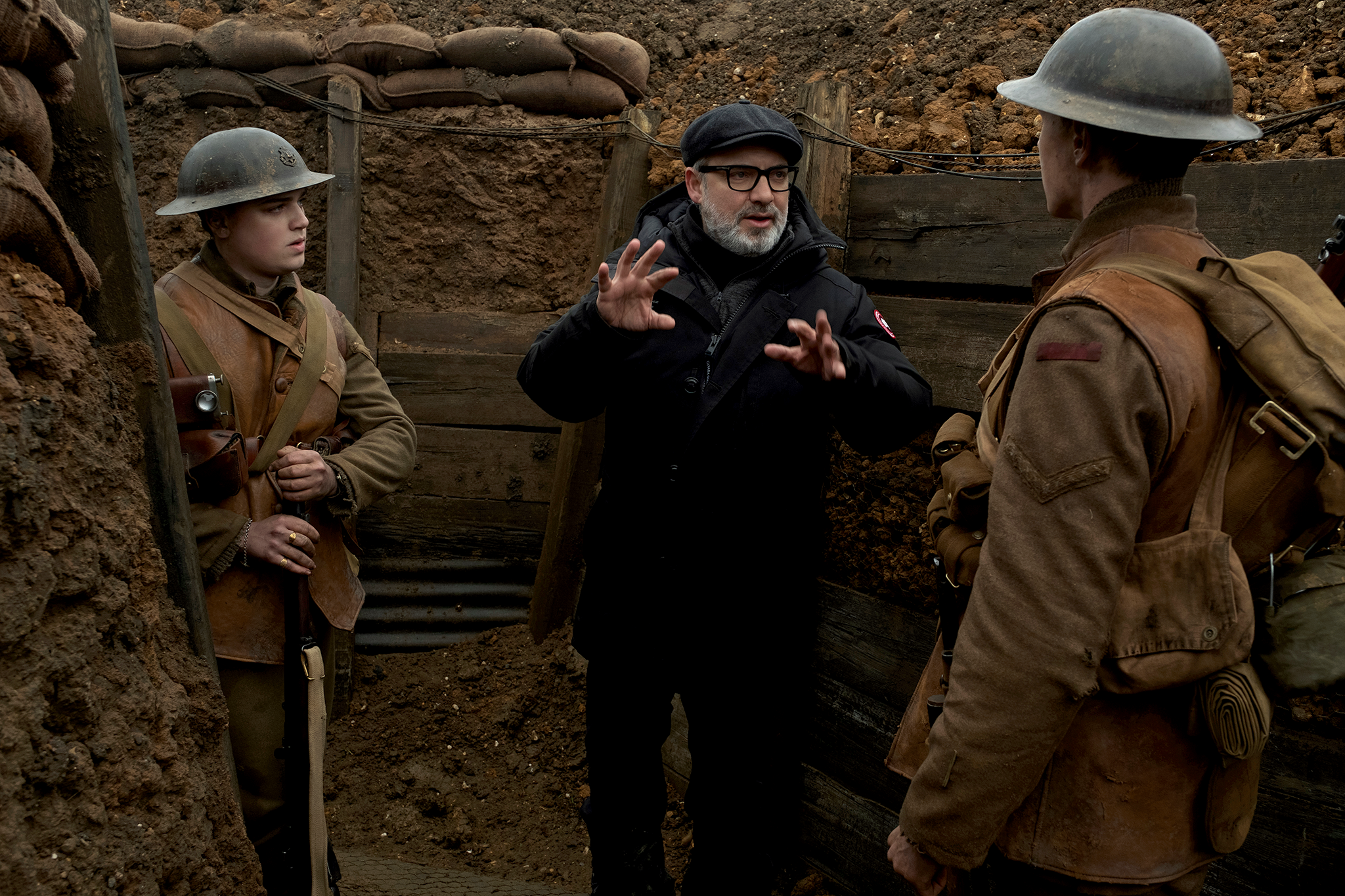 George and Dean, did you work out backstories for yourselves?

DEAN-CHARLES CHAPMAN Yeah. I never really spoke to Sam about it, but I sort of came up with a little backstory of how Blake got there and why. I felt like he would have signed himself up for the war only because his brother did, and I think he’s a very family person, I think he lived in the countryside somewhere with his mom, his dog and his big brother.

GEORGE MACKAY Similarly, I knew very much who Schofield was at home. That’s essential to the story. The film is very present and it’s told in real time — that’s the nature of the one shot, and it means everything happens to the audience and the characters mutually. And so the one thing, which is Schofield’s everything, is home — what he can’t talk about, what he’s left behind and what he wants to come back to. I knew that I had to work it out for myself as well.

Sam, did that idea that the film should look like a continuous shot arrive very early?

MENDES Almost the first thing I came up with after “it’s two hours of real time” was “the best way to tell the story would be as one continuous shot.” Everyone I talked to, from Krysty onwards, knew that that was the film.

How much resistance did you meet from your collaborators?

MENDES There was no resistance. The first question was “Why?” and that’s a totally valid question. I had to answer that and I wanted to answer that, but only after they’d read the script. But after that initial conversation with my key collaborators, with Roger and Lee Smith and Dennis Gassner, Tom Newman etc., everyone understood that the best way to tell the story was to have you with the characters in real time, to never give the audience a way out by cutting away.

MACKAY You’re just with them. It’s not a gimmick, it’s not, “Oh, can I do this?” and it’s not patting itself on the back. The best thing about the one-shot is that you forget about it. It’s to give you a completely immersive experience.

Did you ever have second thoughts about the idea along the way?

MENDES I didn’t have second thoughts, but there were certainly days when I was driven mad by the process and it made me think I couldn’t wait to get back to a conventionally edited movie again. But one of the rules I had for myself was, “If I think that this scene would be better edited, then I’ve written it wrong and staged it wrong.”

Is it hard to keep that particular facet of the production from overwhelming all the other things you might ordinarily be focusing on as a director?

MENDES That’s a very good question. That was my battle every day — to marry something that technically had to be incredibly precise with performances that felt spontaneous and real and a little rough around the edges, and not in any way robotic or preplanned or over-rehearsed. And to make sure that the technical scale of it didn’t overwhelm the human story. That was one of my jobs as a director, to make sure those two things could coexist without one destroying the other.

As actors, how do you balance those two things when you’re involved in such an intricate dance?

CHAPMAN We did months of rehearsals before we actually got the opportunity to start shooting, so by the time we shot, it was just in our bodies, like second nature. You weren’t necessarily thinking, “Oh, I’ve got to move to the right.” It just felt fluid.

MACKAY In a way, that unconscious feeling opens you up to be very present within the scene. When you’ve done it so many times for weeks beforehand, you just know it, in the same way that you know when you’re driving home that that left turn’s there and I should get in that lane there because the right turn is the second to right… And that gives you a real kind of openness and presence when you’re playing the scenes.

Was postproduction a significantly different experience on this film, in that you didn’t have a lot of the tools you would normally use in post?

MENDES It was, actually. We had an edit of the movie effectively two days after we finished that was fairly complete in terms of its visual and physical movement, and in fact I screened it for the heads of department about a week after we finished with a temp score. But then it surprised me that the score was very, very complicated to judge, and that took a while. It was a real challenge. But that initial excitement of putting the film together had already happened, so it became about music and visual effects and sound more than anything else. 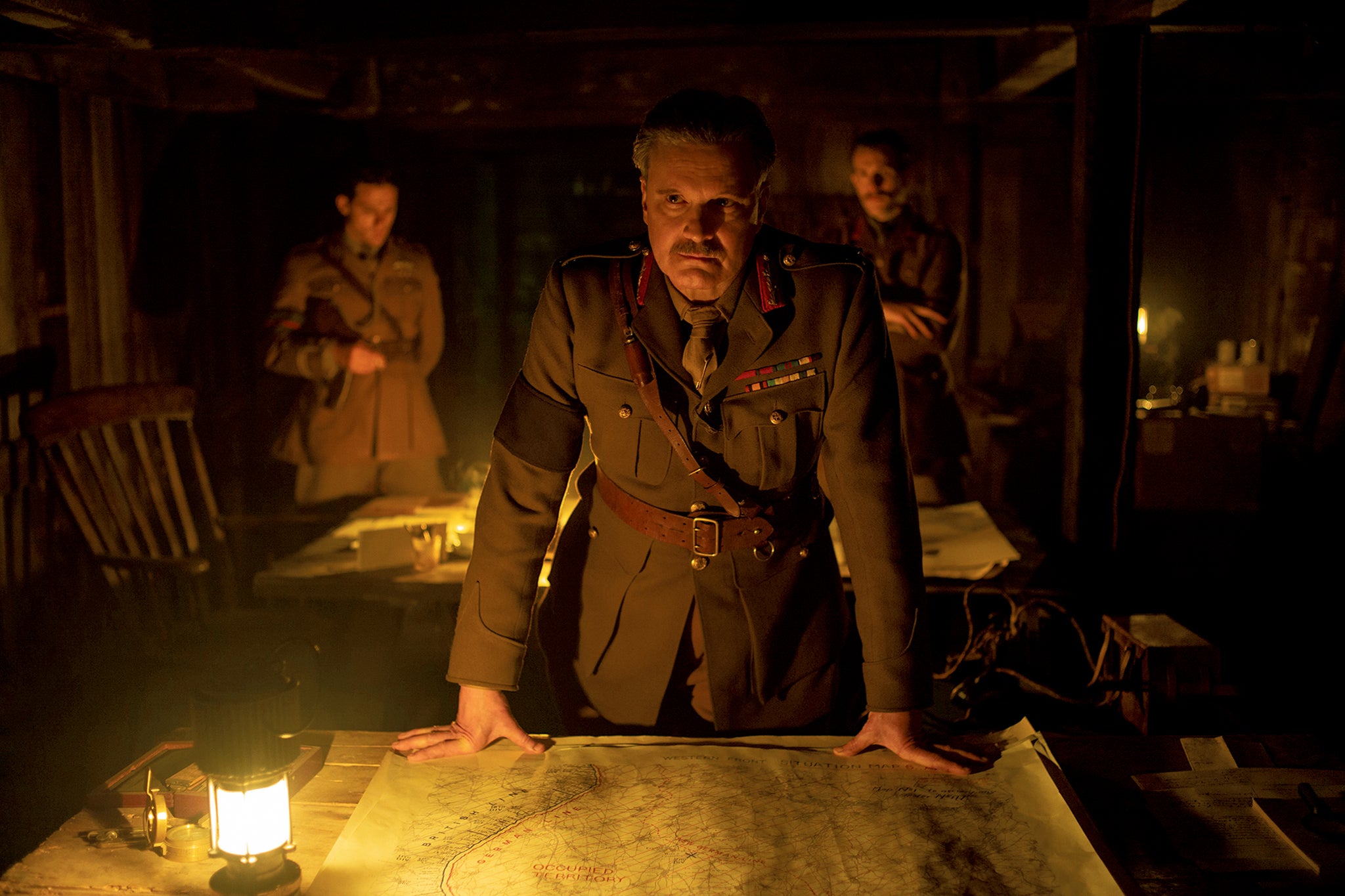 George and Dean, did you have much sense of what it was going to look like cut together?

CHAPMAN We had a tent with a big monitor, and after every take we’d watch playback to adjust our blocking. We saw playback a lot and got an image of what it looked like, but we never saw anything stitched together.

MACKAY It was also a big psychological difference in that we didn’t have any sound on the playback. When you have sound, you’re watching a performance. So the first time I saw the final piece was overwhelming. I came out of the rough cut very clear about who I loved most in my life, and I had to speak to them — not about the film, but just to let them know.

CHAPMAN For me, the film felt so personal it was almost like I forgot anybody was going to see it. The thing that kept coming back to me is that this actually happened. Blake and Schofield aren’t real people, but a lot of young men died in that war. A whole generation was wiped out.

MACKAY And that’s the thing — we can say it in words, but we lose the weight of a whole generation, we lose the weight of millions. That’s the point of this film, which looks at this through a very small, intense focus, because that’s the only way we can understand these bigger things. Everything about this film — the beauty of the script, the one-shot nature — is all in the service of making you live it in real time and understand that that feeling is just a drop in the ocean compared to what happened.

So Sam, is your next movie going to have lots of cuts in it?

MENDES (Laughs) Put it this way: I’m looking forward to the power of editing again. But I’m also going to think twice before I make unnecessary edits in the future.