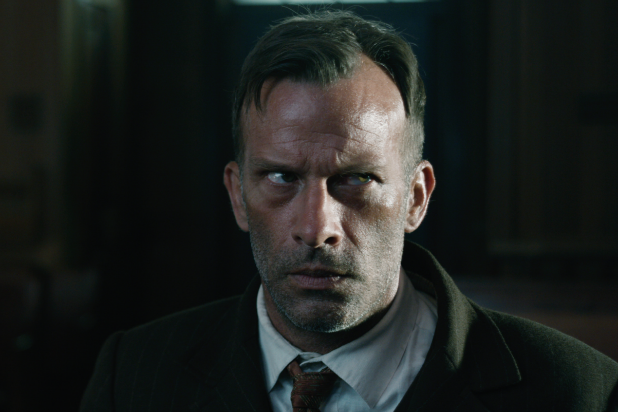 Guilt may be the focus of “1922,” but it’s the audience’s patience that gets a workout. The story of a Midwestern farmer coming to terms with his role in his wife’s murder, Zak Hilditch’s adaptation of Stephen King’s novella of the same name feels overlong or maybe underfed, fleshing out the character’s mental deterioration in handsome but unsurprising detail.

Even boasting strong performances from the likes of Thomas Jane and Molly Parker, “1922” feels best suited for its home on Netflix (premiering October 20) as Hollywood shuffles through its latest surge in King-themed projects.

Jane plays Wilfred James, a Nebraska corn farmer struggling to compromise with his wife Arlette’s (Parker) dreams of big-city life. “Cities are for fools,” Wilfred insists, and their son Henry (Dylan Schmid, “Kid Cannabis”) agrees, though not enough to go along with his father’s half-baked plan to knock off mom and take her family’s land for themselves — at least not yet.

But one night, after Arlette gets drunk enough to offer a few indiscreet suggestions about Henry’s sweetheart Shannon (Kaitlyn Bernard), father and son slice up Arlette and throw her into a well.

Their efforts to move on with their plans for the farm are slowly stymied: first, Shannon gets pregnant, forcing Wilfred to come up with $75 to pay for an institution where she can privately give up the child for adoption, and then later when Wilfred becomes convinced he’s being haunted by Arlette’s decomposing corpse. Eventually, Henry makes off with Shannon, and the two try to make a life for themselves, even as Wilfred becomes consumed by his visions of Arlette, not to mention the imminent fear of a rat infestation that seems to follow him wherever he goes.

At 101 minutes, “1922” offers plenty of sun-dappled ambience, but only about an hour’s worth of story: Hilditch captures all of the major events in King’s story but fails to make them particularly compelling, especially once audiences realize Wilfred’s mental deterioration can end only one way. Using the character’s written confession (in a location far from his beloved farm) as a framing device robs the story of any real suspense and, worse, fails to enrich the events on screen with emotional or moral substance.

His is an admittedly petty greed — Arlette offers to split the profits on her family’s land with him in exchange for a divorce, but he inexplicably wants it all — but the movie barely touches upon the way that his act of violence metastasizes failure and, eventually, tragedy that radiates outward to affect others in his community.

That said, Jane grits his teeth (literally) and delivers one of his best performances to date as Wilfred, inhabiting the unhurried, matter-of-fact rhythms of the character’s Midwestern background while compensating for them with a vivid inner life. Too often actors playing rural roles mistake “slow” for “stupid,” but Jane pinpoints Wilfred’s mental acuity without rushing through reactions that feel anachronistic or phony.

Parker, who brings an intriguing ambiguity to every role she plays, makes Arlette more than a shrew who deserves her fate; so much so, in fact, that it’s unclear in the film exactly why Wilfred hates her so much. Given the time period in which the film is set, you’d think a mom who encourages her son to fool around with his girlfriend would be a welcome change to puritanical pearl-clutchers, but that Parker makes her aspirations clear-eyed, honest and only a little bit selfish complicates Arlette’s adversarial relationship with Wilfred in ways the rest of the movie never does.

Schmid and Bernard supply some much-needed sweetness, and tragic naivete, as teenage lovers launched unwittingly into the world of adult responsibility, while Brian d’Arcy James (“Spotlight”) exudes neighborly intimacy as a town sheriff eager to believe Wilfred’s stories about Arlette. Meanwhile, vermin-averse viewers may struggle to get through the film’s numerous scenes featuring armies of rats that embody the moral decay eating away at Arlette’s corpse and Wilfred’s conscience.

Ultimately, even amidst the rodents and decomposing human remains, “1922” chugs along with predictable familiarity and too little escalation, expounding upon its thesis in only a single, underwhelming way: guilt indeed eventually catches up with everybody, but man alive, it sometimes takes way too long.