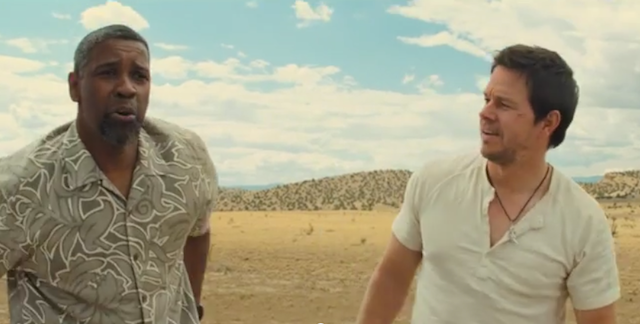 Mark Wahlberg is not a ladies man.

"He's a man's man who feels best with his buddies and having fun," '2 Guns' director Baltasar Kormakur teased. "He's sometimes awkward when it comes to women." Kormakur (left) would know. He's worked with the former Calvin Klein model on two movies, and directed a pilot of a TV show that Wahlberg is producing. Skyping with TheWrap from New York, Kormakur's publicist jumped in to disagree — "completely." Yet Kormakur stuck to his guns.

He described Wahlberg's character in "2 Guns" as "a guy constantly trying to hit on women" who "doesn't have much of a chance."

In addition to rejecting the common perception of Marky Mark, the movie breaks two of Hollywood's golden rules – foreign directors can't make comedies, and the era of movie westerns is over.

Yet blessed with Wahlberg and Denzel Washington, the Icelandic Kormakur has made a quasi-western with a sadistic sense of humor.

TheWrap talked with Kormakur about working with Wahlberg and Washington, why he looks up to Milos Forman and his next big project – climbing Mount Everest.

You've alternated between making smaller, more personal movies and commercial studio films. Coming off "The Deep," which was the opposite of a commercial movie, what drew you to this project?
I liked the prospect of being able to do something lighter with twisted humor. I started off with "101 Reykjavik," a black comedy about a guy who makes his lesbian mother's lover pregnant. That's as twisted as it gets and that's the movie that started my career.

It's unusual that foreign directors are brought in to do something with comedic elements. It's mostly for thrillers and dramas or mayhem movies like Roland Emmerich. I don't want to limit myself to what others have done before.

The chance to work with Denzel and Wahlberg probably didn't hurt. How do they differ as actors?
Mark is as easy as it gets. He's very loose and a straight-up guy. There isn't much bullshit or weirdness.  Denzel is very particular and very professional in his approach. He's not that easy to wrangle. You gotta earn his trust.

He doesn't make it easy on you if you don't have an answer for his question. He makes you really feel it. He was up for the task and ready to do it. We had a good time together. My challenge was to create the ground for them to find the chemistry to play around.

Also read: Robert Zemeckis on Taking 'Flight' With Denzel Washington – and His Socks

Denzel is pretty famous for going off script anyways…
That's what I wanted. He has great instincts and it's often better than somebody sitting in the office writing it.

You don't want to be too repetitive with the other things he has done. You want to push it out of his comfort zone. Denzel smiling is a rare thing in films, and when he does it lights up the cinema.

This role seems a little different for Mark too. He often plays the straight guy.
When I got to the project he could have played either role because Denzel wasn't attached.  I really wanted him to play [Stig]. We had done ‘Contraband' where he was the straight man, taking care of his family.

This would let him go off and have fun with it. This guy is constantly trying to hit on women when he doesn't have that much of a chance. Mark is not the ladies man people might think. He's a man's man who feels best with his buddies and having fun. He's sometimes awkward when it comes to women.

Publicist: I completely disagree with that. [Laughs]

Is it fair to describe this movie as a Western?
There's a little wink at the western. I've always been a big fan of Westerns. You can't make them today, but you can wink a little bit.

Why can't you make them anymore?
They had their time. That was a period in cinema history. You can't make 70s movies today either, but you can be inspired by them. It's a little bit like remaking "Psycho.

We were very conscious about only winking at westerns in this movie. We had a debate over whether Mark was supposed to have a cowboy hat or not. There was no way I was going to put a cowboy hat on him.

What westerns are you favorite?
"Butch Cassidy and the Sundance Kid." I am a big fan of movies that don't take themselves too seriously. You know you won't change the world but have fun. Movies like "Butch Cassidy" I enjoyed tremendously but it didn't alter my opinion of the world.

When ‘Iron Man' came out I said ‘oh they are trying to have some fun.' It was a relief because every superhero movie had become so damn serious. Some people love that, but for me it's a weird thing to watch. A man with a cape can have fun but I won't listen to a lecture from him.

You're about to make a movie about a mountain climbing disaster and working on a pilot about a missionary during the cold war. Is there room for levity and fun?
It's different for each one of them. The better luck you have in the business, you can put more of you into the films and make it more yours. Then if that works, the studios will be more accepting. Or I can make my own movies.

Is there one story out there that you dream of making?
The Vikings a story by me. It can be shot in Iceland but I do need studio support to create the world.

Which is what?
A new world of vikings that I don't think has been done in movies yet. It's similar to Mel Gibson with "Apocalypto" and how you saw that world in a new light.

It's more authentic. There's been a lot of clowning around with the Vikings with beards down to here and two horns. They weren't like that.

This is very different. It's brutal and hardcore. They were not barbarians, just guys who were the best at building boats at the time.

You've taken a one-for-them one-for-you approach to making movies over the past few years. Are you at the point where you can make them all for you?
That's the goal of course.  It's a long way to cross the Atlantic Ocean. There's no director from my country that has done that. It's not something where the doors will stand open. Every director develops trust through every movie.

What director do you look up to?
Milos Forman. He's a director that came to America, pressed himself in some way but also adapted to the studio system. He made films that are bother interesting and accessible. There's a way of growing. You don't only have to be a small director in a small country, but you don't have to lose all identity either.