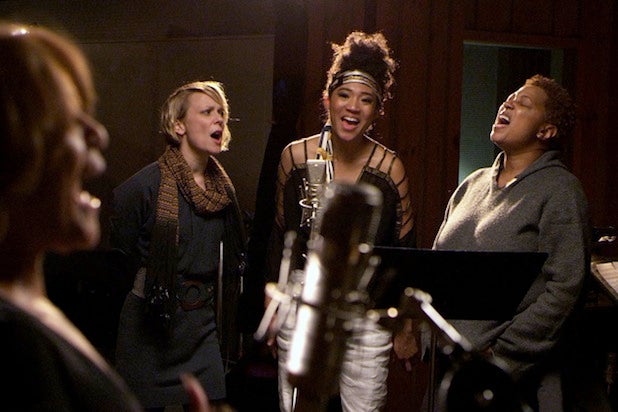 The Academy Awards are a little more than one week away, and for the ladies of Best Documentary nominee “20 Feet From Stardom,” March 2 may be the culmination of more than 50 years in the shadow of the spotlight.

Since the film premiered at Sundance in 2013, some of the central characters — Judith Hill, Darlene Love, Lisa Fischer, Tata Vega and Merry Clayton — have seen their lives change dramatically.

Beyond a whirlwind of press tours and publicity for “20 Feet From Stardom,” the film has achieved what it set out to accomplish: the ladies who stood in the background, singing behind the stars and watching others take credit for their voices, are finally getting recognition for their hard work.

Also read: ’20 Feet From Stardom’ Review: Get Into the Groove With Backup Singers

Darlene Love’s (pictured left) story was a bit different than the some of the others in the film.

“I walked that 20 feet,” she said. “It’s just that the movie is telling the story about it now.”

After years of singing backup with The Blossoms, Love recorded the now iconic “Christmas (Baby Please Come Home)” for Phil Spector in 1963. But the jobs dried up, and she took a job as a maid to support herself and her kids.

“We were the first black background singers; with The Blossoms, they started calling us as a group,” Love told TheWrap in an interview.

“When you watch television shows back then, you see white singers, you never see black singers,” she added. “Because nobody else was doing it, we brought other black background singers into the business, and that’s what made it so great and made me want to tell the story.”

It was during a shift cleaning another person’s house that Love heard her song on the radio and realized singing was her true calling.

Love has performed “Christmas” on David Letterman’s late night show every year since 1986, and was inducted into the Rock & Roll Hall of Fame in 2011.

“Now people know that I’m working, they call. I have a great manager now. And it’s not like it changes overnight for you — you have to go and get it — but what it has done for me is it’s gotten me in a whole lot of other places, gotten me out of New York and New Jersey,” she added.

Up next for Love is “My Name Is Love: The Darlene Love Story,” a television movie based on her memoir currently in production at OWN, and a greatest hits album due out on Feb 22.

“Oprah Winfrey Network is about to do a movie about my life – I guess y’all think I can take it all this stuff at once!” the 72 year old Love joked about her busy schedule.

And though fans have been clamoring for a tour with all the leading ladies from “20 Feet From Stardom” — especially after watching Hill, Love, Clayton and Fischer sing the national anthem together at the 2014 Rose Bowl on New Years Day — Love says their busy schedules may keep such a tour from happening, at least in the near future.

For now, Love said, fans will have to be happy with seeing them on a big stage like the Oscars. Which isn’t such a bad venue, after all.

Meet some of the other ladies from “20 Feet From Stardom” and see what they are up to now:

Clayton charted on the Billboard Hot 100 with the song “Yes” off the “Dirty Dancing” soundtrack. And the June 2013 wide release of “20 Feet From Stardom” coincided with Clayton’s greatest hits album, “The Greatest Hits of Merry Clayton,” and kicked off a mini-tour around Los Angeles and nationwide.

Hill was set to perform duets with Michael Jackson on his “This Is It” tour, but Jackson’s sudden death in June 2009 skewered those plans. Instead, Hill sang a rendition of Jackson’s “Heal the World” at his memorial service, which garnered worldwide attention.

Hill scored a gig opening for singer Josh Groban on his fall 2013 “In the Round” arena tour and also sang a duet with him on the tour. The 29-year-old Hill’s debut solo album is slated for a spring 2014 releas

Fischer is currently on tour with the Rolling Stones, a job she’s held since 1989. In fact, Fischer has sung with Mick Jagger and the gang on every live tour since ’89, and she shares the lead vocals on live renditions of “Gimme Shelter,” which fellow “20 Feet From Stardom” leading lady Merry Clayton first recorded back in 1969.

Fischer’s 1991 solo song “How Can I Ease the Pain” — off her album “So Intense” — reached the top of the Billboard R&B chart and won her a Grammy Award for Best Female R&B Vocal  Performance.

Since the film premiered at Sundance, Fischer teamed up with Nine Inch Nails for their 2013 tour.

After starting her career on the stage, singing in a Los Angeles production of “Hair” in the 1960s, Vega sang backup for artists like Patti LaBelle, Michael Jackson, and Madonna. At the same time, she recorded four solo albums, which were re-released digitally by Motown in February 2014 in the run-up to “20 Feet From Stardom”‘s Oscar campaign.

Vega will be joining Elton John for his standing residency at Caesars Palace in Las Vegas beginning in March; Vega has toured with the singer since 2010.