First off, I need to say that making Oscar forecasts in early September is an insane thing to do, and anybody who tries to tell you what’s going to be nominated or what’s going to win at this point is a complete fool.

Now I will don my fool’s cap and make a suggestion: 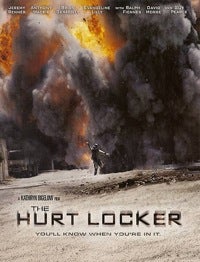 While one aspect of the fallout from the move to 10 Best Picture nominations has been lots of people pointing out that The Hurt Locker now has a really good chance of securing one of those 10 slots, I think that’s selling the film short. At this point, looking at a landscape of movies I haven’t seen and buzz I don’t trust, I’d suggest that Kathryn Bigelow’s tense little Iraq drama has a damn good chance of being the last film standing come next March 7.

And when I look at what’s presumed to be standing in its way, I see a whole lot of vulnerabilities.

Nine? Yeah, Rob Marshall has won before, but I NEVER trust musicals.

The Informant? A Serious Man? Steven Soderberg and the Coen Brothers have cachet, but can they really win over import-minded Academy voters with their lighter efforts, however deft those may be?

Up in the Air? I hear it’s terrific and I hope it’s terrific, but I’ll need to see something to persuade me that Jason Reitman can win the needed amount of respect among voters old enough to be his grandfather.

Invictus? Now we’re talking … maybe. But Clint hasn’t really pulled off an Academy home run in his last four movies, and bio-pics are usually the stuff of Best Actor Oscars, not Best Picture ones.

Inglourious Basterds? There are undoubtedly factions within the Academy that would love to get a young-skewing, wildly entertaining, ambitious, messy popcorn movie in the mix, but this one seems awfully divisive to secure the kind of consensus it’ll need, particularly since the new Best Picture rules make consensus an absolute necessity.

Avatar? When was the last time a grand, expensive epic swept in at the last minute on the heels of questionable word-of-mouth to take the big prize?

Oh, yeah: Titanic. Well, maybe James Cameron can do it again. But I just can’t see the voters completely embracing a movie in which the hero isn’t even recognizably human.

(Face it, he’s much freakier-looking than those Hobbits from The Return of the King, who sort of seemed like the kind of scruffy kids you might find sporting Trilbys poolside with Audrina Patridge.)

I don’t know … it just seems to me that in recent years the Best Picture winner is often as not the movie that nobody thought would be the sole survivor back in September — and right now, The Hurt Locker looks like that movie to me.

And I shouldn’t say that, because I have yet to see most of the movies I’ve just dismissed.

I hope, and expect, to be proven wrong by at least some of them.

I wouldn’t even say The Hurt Locker is my favorite movie of the year … but at the moment, it's the one I trust.