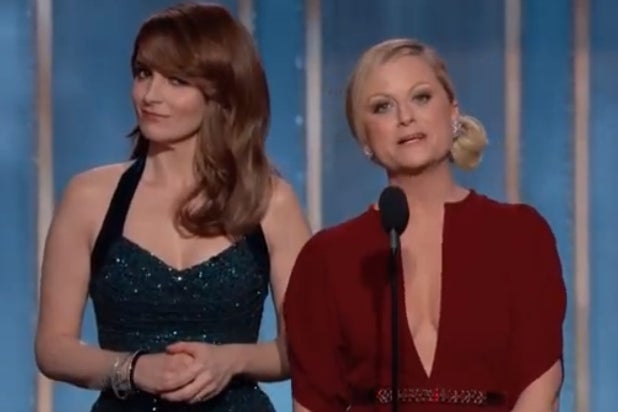 Sunday marks just the fifth time since 1995 that the Golden Globe Awards will be emceed by a full-time host, duties that fell to a committee for 15 years prior.

When Amy Poehler and Tina Fey take the stage — as they did last year, and will do again in 2015 — they’re probably shooting to be remembered for their material rather than some drummed-up controversy, as predecessor Ricky Gervais did at various times during his own three-year run.

As Gervais knows better than anybody this side of Seth MacFarlane, hosting a major awards show is daunting — especially the monologue. Ultimately, good joke-telling comes down to good joke-writing, which Fey and Poehler should have in spades.

To see what they’re up against, TheWrap compiled the top monologue jokes from 2010-2013, the Globes’ modern host era. Here are the best one-liners and gags from the four prior ceremonies:

2013 Golden Globe Awards, Hosts: Tina Fey and Amy Poehler
“Only at the Golden Globes do the beautiful people of film rub shoulders with the rat-faced people of television.” – Poehler

“Ricky Gervais could not be here tonight, because he is no longer technically in showbusiness.” – Fey

“It was a great year for women in film: Kathryn Bigelow (is) nominated tonight. I haven’t really been following the controversy over ‘Zero Dark 30,’ but when it comes to torture, I trust the lady who spent three years married to James Cameron.” – Poehler

2012, Host: Ricky Gervais
“Who needs the Oscars? Not me, and not Eddie Murphy. He walked out on them, and good for him. But when the man who said ‘Yes’ to ‘Norbit’ says ‘No’ to you, you’re in trouble.”

Don’t believe us? Watch the monologue:

2010: Ricky Gervais
“I will make the most of this opportunity — I’m not used to these sort of viewing figures. Let’s face it, nor is NBC.”

“But actors aren’t just loved here in Hollywood, they are loved the world over because they’re recognizable. You can be in the third world and you get a glimpse of a Hollywood star and it makes you feel better. You could be a little Asian child with no possessions and no money, and you see a picture of Angelina Jolie and you think: “Mommy.”

“Let’s get on with it before NBC replaces me with Jay Leno.”