Black filmmakers had a record year at the box office in 2018 — earning a record $1.5 billion at the domestic box office from 16 films. (That’s double the performance in 2017, when nine films from black filmmakers grossed a combined $658.1 million domestically.)

In addition, this was the first year in which five films by black filmmakers topped $100 million in North American ticket sales in the same year.

The biggest domestic box office hit of the year was Ryan Coogler’s “The Black Panther,” which grossed $700.1 million in North America and $1.3 billion worldwide. It also featured a predominantly black cast of actors playing characters representing a range of perspectives, and addressing struggles and themes that black audiences know all too well.

But there were a wealth of hits by other black filmmakers, including Steven Caple Jr.’s Michael B. Jordan boxing film “Creed II,” which has earned $112.2 million; the $104.1 million-grossing animated hit “Spider-Man: Into the Spider-Verse,” co-directed by Peter Ramsey and featuring Afro-Latino character Miles Morales as the webslinger; and Antoine Fuqua’s “The Equalizer 2,” a Denzel Washington actioner that pulled in $102.1 million.

Even Ava DuVernay’s “A Wrinkle in Time” crossed the $100 million threshold — though that one is considered a disappointment given its $100 million-plus production budget, not counting marketing costs. 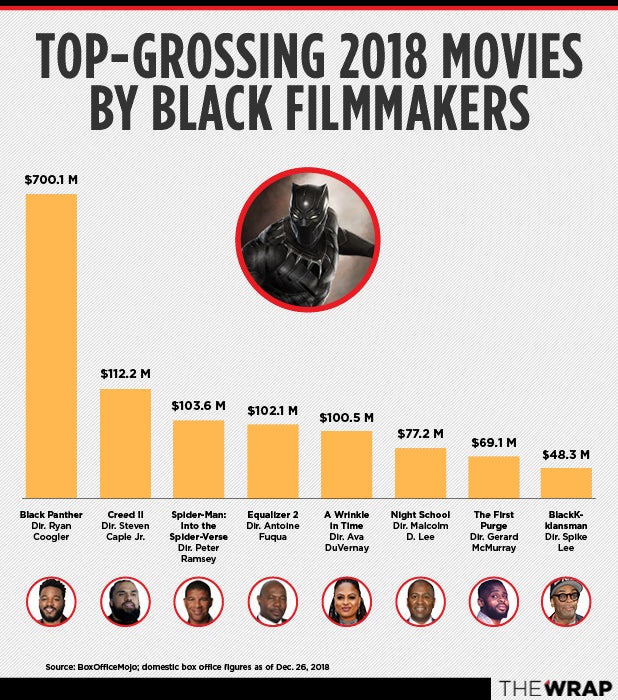 “What we’re seeing is a combination of a number of things. We’ve seen, in the last four or five years, a renaissance of black voices and a rise of black filmmakers,” Macro founder and CEO Charles D. King said. “And you’ve got studios and financiers paying more attention to an audience that’s been historically underserved.”

In 2017, African American audiences over-indexed at the cinema, making up a higher percentage of the number of movie tickets sold (23 percent) and moviegoers (20 percent) than they do of the U.S. population (18 percent), according to data from the Motion Picture Association of America.

And while it wasn’t so long ago that Hollywood studios and producers argued that a star like Washington couldn’t open a movie abroad because he’s black, “Equalizer 2” grossed nearly half of its $190.4 million in ticket sales from theaters overseas. Similarly, “Into the Spider-Verse” has earned more than half its $213.4 million total abroad.

It was just three years ago that the stark lack of people of color recognized at the 2015 Academy Awards led April Reign to start the hashtag #OscarsSoWhite, forcing the Academy to make drastic changes by doubling the number of black and female members in its ranks.

But this year, there’s already talk that more than one film directed by a black filmmaker — and telling a story with predominantly black voices — could earn nominations for Best Picture or even director. (Two Best Picture nods in the same year would be a first for the Academy.)

The awards chatter for “Black Panther” has been building since the film came out in February, and a nomination for that film mark a milestone for Marvel Studios and superhero films as well. The film was already nominated for a Golden Globe in the Best Picture – Drama category.

Also Read: 'If Beale Street Could Talk' Director Barry Jenkins on Why Showing Vulnerability Is 'a Sign of Strength'

Along with “Black Panther,” Spike Lee’s “BlacKkKlansman” and “If Beale Street Could Talk,” which “Moonlight” director Barry Jenkins adapted and directed from a James Baldwin novel, were also nominated at the Golden Globes and have been in the Oscar race conversation.

“It shows that Hollywood gets at least passing marks for allowing — or for supporting, rather, black filmmakers,” Gil Robertson, founder of the African American Film Critics Association, said.

Lee, a seminal filmmaker within the black community for three decades, told TheWrap that he’s heartened by the new wave of black filmmakers. “I just hope that this is not a trend,” he said. I hope this is steady, that it’s not just like a blip where everything came together and then nothing happens after this. We have to keep up the momentum.”

One of the surefire ways to ensure the momentum is to continue to tell good stories that appeal to audiences and make money, King said. Hollywood is, after all, a business just like any other — films have to have a return on their investment.

“Entertainment is a business like any other, and if you’re not being diverse and inclusive then you are literally leaving money on the table,” April Reign, founder of the #OscarsSoWhite movement, told TheWrap. “What’s happening behind the camera has always been important, but now a light has been shown on that side of it too. I think what we’re seeing is a very slow change in who are the gate keepers.”

Though 2018 has been especially beneficial for black filmmakers and audiences, there are a number of other audiences in recent years that have slowly garnered more recognition. “Crazy Rich Asians” is among the year’s highest-grossing films, earning $238.0 million worldwide, and was also nominated for Golden Globes’ Best Picture – Comedy or Musical category. Last year, Disney’s Latino-flavored “Coco” won two Oscars for original song and best animated feature.

With the rise of production companies run by people of color — from Viola Davis and Julius Tennon’s JuVee Productions to “Creed” and “Black Panther” star Michael B. Jordan’s Outlier Society Productions — a focus has been put on greenlighting and supporting those voices.

“We’re seeing so many filmmakers and creators supporting each other and the community and that’s where real progress and change happens,” King said. “Before they may have just been happy to break into the room, but this group understands it’s less about breaking into the room and more how to create your own room.”

”Deliver Us From Eva“ and ”She’s Gotta Have It“ are among the hits that prove that movies, especially romantic comedies, can be colorblind