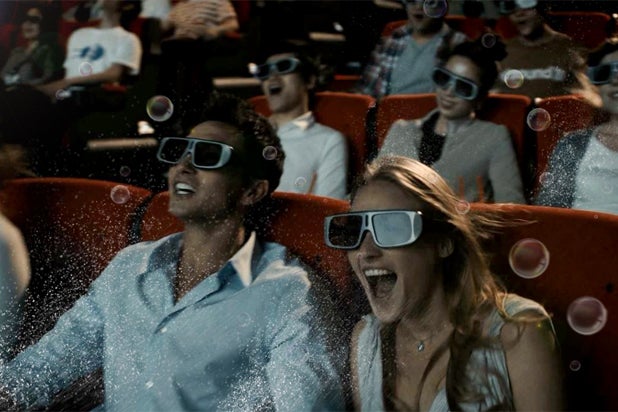 The record-breaking business at the box office this year is even setting new heights for the premium movie theater company 4DX, which has seen moviegoers turn out to see the biggest blockbusters of the year in their 4-D cinemas to the tune of over $250 million.

On Tuesday, 4DX announced that it hit the quarter-billion mark for the first time in its nine-year history thanks to its support of some of the top grossing blockbusters of the year.

Among the films that were presented in 4DX’s moving-chair, water-spraying theaters were “Jurassic World: Fallen Kingdom,” “Avengers: Infinity War,” “Black Panther,” “The Meg,” “Jumanji: Welcome to the Jungle,” “Mission Impossible: Fallout,” and “Ready Player One.” Those seven films combined to account for half of 4DX’s annual grosses, with “Fallen Kingdom” leading the way with a company record $31 million grossed.

While 4DX has been in a handful of select Regal Theaters locations in the U.S., it has built a major presence in Asia, with Japan being the top market for 4DX with $37 million grossed this year followed by China and Korea. 4DX’s annual grosses are likely to finish well above $300 million with films like “The Grinch,” “Fantastic Beasts: The Crimes of Grindelwald” and “Aquaman” among the upcoming releases that will be supported by the format.

Overall, the domestic box office is on pace to hit an annual total of $12 billion for the first time ever. The year-to-date total is currently at $9.8 billion, 11 percent above last year and six percent ahead of the record pace set in 2016.