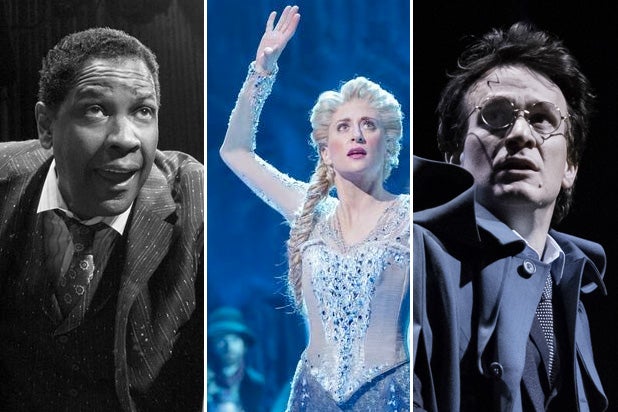 The Tonys and the Oscars share a similar problem of confusion, especially when it comes to whether an actor is a lead or supporting. At the movies, Viola Davis (“Fences”) and Jennifer Hudson (“Dreamgirls”) delivered lead performances, but won the Academy Award for Best Supporting Actress.

On Broadway this season, Michael Cera is the lead in “Lobby Hero,” but the Tonys have him eligible as Best Featured Actor. Likewise, all three actors in “The Children” — Francesca Annis, Ron Cook and Deborah Findlay — have been slotted into featured categories. And only slightly less head-scratching is putting Laurie Metcalf and Alison Pill from “Three Tall Women” in the featured actress category.

The upshot of these ill-advised calls is that several of these Tony-worthy actors could end up snubbed on May 1 when this year’s nominations are announced. It’s a case of too many contenders in the featured categories, and not enough competition among the leads.

There’s certainly no competition among musical revivals. Only three opened this season, and “Carousel,” “My Fair Lady” and “Once on This Island” are the shoo-ins.

Only four shows are real contenders for Best Musical: “The Band’s Visit,” “Frozen,” “Mean Girls,” and “SpongeBob SquarePants.” Those shows will also be nominated for best score and best book.

John Leguizamo’s “Latin History for Morons” deserves to be nominated for Best Play, but probably won’t be. The likely four are Lucy Kirkwood’s “The Children,” Claire van Kampen’s “Farinelli and the King,” John Thorne’s “Harry Potter and the Cursed Child” and Ayad Akhtar’s “Junk.”

There isn’t real competition until we get to Best Revival of a Play. Expect the Tonys to expand their usual four nominees to five to recognize “Angels in America,” “The Iceman Cometh,” “Three Tall Women” and “Travesties,” with “Lobby Hero” angling for that possible fifth slot.

Clive Owen (“M. Butterfly”), Tom Sturridge (“1984”), and Leguizamo (“Latin History”) are deserving, but their shows have closed and the Tonys are nothing if not a marketing tool. The nominees for best lead actor will be Andrew Garfield (“Angels in America”), Tom Hollander (“Travesties”), Joshua Jackson (“Children of a Lesser God”), Mark Rylance (“Farinelli and the King”), and Denzel Washington (“The Iceman Cometh”).

The most competitive contest this year is Best Featured Actor in a Play. Only Nathan Lane (“Angels in America”) is a lock. My very personal choices would include Cera (“Lobby Hero”), Marton Csokas (“The Parisian Woman”), Neal Huff (“Iceman”), and Matthew James Thomas (“Time and the Conways”) to join Lane. I

t’s doubtful, however, that any of those four will make it. Expect instead to see Lane in competition with Anthony Boyle (“Harry Potter”), Brian Tyree Henry (“Lobby Hero”), James McArdle (“Angels”) and David Morse (“Iceman”).

The pickings are slim for Best Actor in a Musical. In fact, if the competition were this weak on the distaff side, the cultural editor at the New York Times would be assigning a series of articles on Broadway’s prejudice against actresses. Joshua Henry (“Carousel”), Harry Hadden-Paton (“My Fair Lady), Paul Alexander Nolan (“Escape to Margaritaville”), Tony Shalhoub (“The Band’s Visit”) and Ethan Slater (“SpongeBob”) will be nominated. Why? Because no one else is eligible!

Obviously, Broadway’s innate favoritism toward women has produced a far more competitive contest among the women Best Actress in a Musical. Lauren Ambrose (“My Fair Lady”), Hailey Kilgore (“Once on This Island”), LaChanze (“Summer”), Katrina Lenk (“The Band’s Visit”) and Jessie Mueller (“Carousel”) are the likely nominees. Erika Henningsen and Taylor Louderman (“Mean Girls”), as well as Caissie Levy and Patti Murin (“Frozen”), could cut in to each other’s votes to throw them out of contention.

Findlay and Annis (“The Children”) deserve Tony recognition, but since their show has closed, it leaves nominations for Best Featured Actress in a Play open to Susan Brown and Denise Gough (“Angels in America”), Metcalf and Pill (“Three Tall Women”) and Noma Dumezweni (“Harry Potter”) — with Tammy Blanchard (“The Iceman Cometh”) as a possible spoiler. Anna Baryshnikov’s enchanting performance in “Time and the Conways” remains a personal favorite, but alas, her show is long gone. Plus, her acting was far too subtle.

As always, the two featured categories for musicals are too chock-a-block with talent. Lindsay Mendez (“Carousel”) and Kenita R. Miller (“Once on This Island”) are likely to join Ashley Park and Kate Rockwell (“Mean Girls”), leaving room for either Ariana DeBose (“Summer”) or the divine Diana Rigg (“My Fair Lady”). Tony doesn’t know what to do with singers like Renee Fleming (“Carousel”).

Nor is Tony likely to give a nod to dancer Amar Ramasar (“Carousel”), who should be nominated for Best Featured Actor in a Musical. (For some reason, Tony does like to honor performers like Bette Midler who can neither sing nor dance.)

Among the featured actors, Tony Yazbek (“Prince of Broadway”) might break the jinx of having been in a shuttered musical. His showstopper “The Right Girl” topped the previous three renditions seen on Broadway in “Follies.” (Yes, I witnessed them all.) If the Tony nominators somehow forget Yazbek’s brilliance, the five nominees for featured actor in a musical will likely be Norbert Leo Butz (“My Fair Lady”), Alexander Gemignani (“Carousel”), Grey Henson (“Mean Girls”), Gavin Lee (“SpongeBob”) and Ari’el Stachel (“The Band’s Visit”).

Best Director of a Musical looks like a contest among Michael Arden (“Once on This Island”) Tina Landau (“SpongeBob”), Casey Nicholaw (“Mean Girls”), Jack O’Brien (“Carousel”) and Bartlett Sher (“My Fair Lady”) — leaving Michael Grandage (“Frozen”) out in the cold.

The Tony Awards are held June 10 at Radio City Music Hall in New York City and broadcast live on CBS.