Tonight’s event, the second of a two-night awards show, was hosted by comedian Nikki Glaser and focused exclusively on awarding the best and buzziest in reality TV.

This year MTV opted for two shows this year instead of its typical one-night affair, with Leslie Jones hosting the first night of scripted awards.

“RuPaul’s Drag Race” and its across-the-pond spinoff “Drag Race UK” led the night this year, with five nominations and three wins total. These included Best Competition Series and a Best Host win for RuPaul, who was also nominated for the category in 2017. 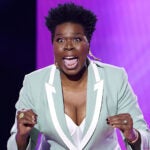 Other winners in the unscripted category included “The Daily Show with Trevor Noah,” which took home the golden popcorn for best talk/topical show and “The Bachlorette,” which won best dating show in its first year nominated.

Executive producers for both the 2021 MTV Movie & TV Awards and the Movie & TV Awards: UNSCRIPTED are MTV’s Bruce Gillmer, Wendy Plaut and Vanessa Whitewolf, Den Of Thieves’ Jesse Ignjatovic and Barb Bialkowski. Jackie Barba and Alicia Portugal are executives in charge of production. Lisa Lauricella is the music talent executive for both events.

Check out the full list of winners and nominees below: