Matthew Lopez’s two-night drama “The Inheritance” earned four awards, including Best Play. Director Stephen Daldry also won for the E.M. Forster-inspired play about gay men in the AIDS era, along with lead actor Andrew Burnap and 90-year-old featured actress Lois Smith, who earned her first ever Tony on her third nomination. Jeremy O. Harris’ “Slave Play,” which came in with a record 12 nominations, was completely shut out.

“A Christmas Carol,” a nonmusical production that ran during the 2019 holiday season, collected five awards for technical categories — including a rare win for Best Original Score made possible because of the dearth of original (non-jukebox) musicals that managed to open before the pandemic shut down Broadway in March 2020.

“Jagged Little Pill,” a jukebox musical based on Alanis Morisette’s hit 1995 album that led with 15 nominations, settled for two awards, for Diablo Cody’s book and for supporting actress Lauren Patten, who acknowledged the recent blowback for her portrayal of a character who was nonbinary in the show’s pre-Broadway run. In her acceptance, Patten acknowledged the “necessary conversations” she has had in recent weeks with trans and nonbinary people upset that a cisgender actress was playing the role.

Also Read:
How to Watch the Tony Awards 2021: Streaming Details and More

And host and six-time Tony winner Audra McDonald welcomed the Broadway community back, telling the masked crowd in the 110-year-old Winter Garden Theatre: “It’s wonderful to see half of your beautiful faces.”

The Tonys celebrated the Broadway productions that managed to open during the 2019-20 season before the pandemic shuttered all Broadway theaters in March 2020. Just 18 productions were eligible, roughly half the number that would be contending in a normal year. In fact, no musical revivals opened during the eligibility period, so that category was eliminated altogether. 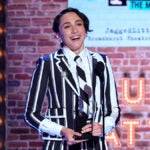 Best Direction of a Play

Best Direction of a Musical

Best Book of a Musical

Best Original Score (Music and/or Lyrics) Written for the Theatre

Best Scenic Design of a Play

Best Scenic Design of a Musical

Best Costume Design of a Play

Best Costume Design of a Musical

Best Lighting Design of a Play

Best Lighting Design of a Musical

Best Sound Design of a Play

Best Sound Design of a Musical