Results for the 42nd Razzie Awards are in — and if you had anything to do with “Diana: The Musical,” you might want to go back to bed.

The big, fat Broadway bomb about the Princess of Wales beamed into your living room courtesy of Netflix was this year’s big Razzie “winner,” taking home five of what the group calls its “un-coveted … tacky, gold-spray-painted statuettes.”

The streaming version of the stage musical bagged Worst Picture, Worst Actress (Jeanna de Waal), Worst Supporting Actress (Judy Kaye, who actually played two roles), Worst Director (Christopher Ashley) and Worst Screenplay (script by Joe DiPietro, music and lyrics by DiPietro and David Bryan). The group pointed out how richly the “Diana” script deserved the honor for “featuring some of the year’s most ridiculed dialogue and lyrics — Including rhyming ‘Camilla’ with both ‘Manila’ and ‘Godzilla.'”

Faring almost as miserably was “Space Jam: A New Legacy,” with slam dunks for Worst Remake, Rip-Off or Sequel; Worst Actor (LeBron James); and Worst Screen Couple (James and “Any Warner Cartoon Character or WarnerMedia Product He Dribbles On).”

Sadly, that last “Space Jam” triumph meant Jared Leto failed to sweep the two categories in which he was nominated for his Fredo-Corleone-by-way-of-Super-Mario “House of Gucci” performance. He lost Worst Screen Couple (“Jared Leto & EITHER His 17-Pound Latex Face, His Geeky Clothes or His Ridiculous Accent”) but emerged the victor of Worst Supporting Actor and can now proudly place his Golden Razzie trophy (valued at $4.97) next to his Oscar.

Will Smith, a previous four-time Golden Raspberry winner, was the recipient of the back-handed compliment known as the Razzie Redeemer Award, for his Oscar-nominated performance in “King Richard.” He beat Jamie Dornan (“Belfast”) and Nicolas Cage (“Pig”) for the distinction.

And finally, there’s Bruce Willis, who came out on top after a months-long dirty, rotten slugfest of a race against himself — eight of himselves, to be precise. The only nominee to score his very own category — Worst Performance by Bruce Willis in a 2021 Movie — he triumphed with “Cosmic Sin.”

Founded in 1981 by cinephiles John J.B. Wilson and Mo Murphy, the Razzies celebrate the worst in moviemaking each year. The group is made up of some 1,000 voters, “spanning almost every continent and 49 U.S. States, except one of the Carolinas,” as the latest press release explained. Good-natured past honorees who gamely accepted their Golden Raspberries in person include Halle Berry for “Catwoman” and Sandra Bullock, who stopped by to pick up her Worst Actress prize for “All About Steve” the day before she won an Oscar for “The Blind Side.”

Here is the full list of 2022’s Razzie nominees. 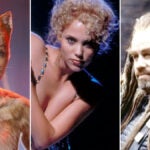