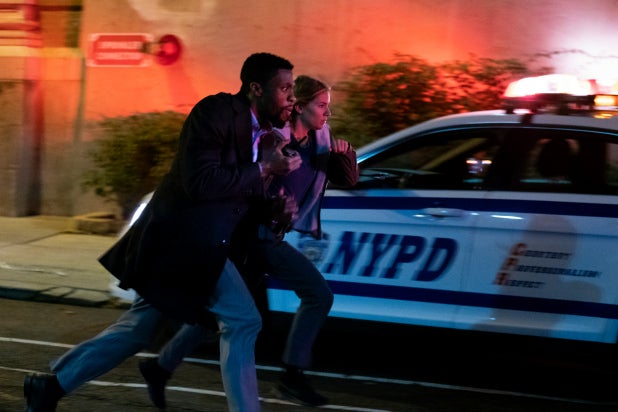 Exploring what it’s like to be a black cop in conflict, especially in the #BlackLivesMatter era, has become popular fodder for filmmakers. But while it’s an interesting topic to pursue, the films that have dared to do so have been unsatisfying.

“Monsters and Men” struggled with determining a resolution, “Black and Blue” pivoted to a humdrum action saga and now director Brian Kirk’s new film, “21 Bridges,” also struggles to find its voice in the conversation.

Written by Adam Mervis and Matthew Michael Carnahan (“Dark Waters”), the New York City-set “21 Bridges” actually tries, but ultimately fails, to examine issues that extend beyond its heroic policeman Andre Davis (Chadwick Boseman), who’s known among his unit as the go-to officer when you need to take down a cop killer. His father, a respected officer in his own right, was gunned down by thugs when Andre was just a child, and he’s made it his mission to apprehend anyone else who would target a badge.

So when Andre is called to the scene of a liquor store where eight cops were killed following a drug bust gone awry, he comes in eager to crack the case. To his credit, Boseman — seemingly channeling all his King T’Challa/Black Panther energy — is appropriately commanding as a narrowly focused man of the law who has only justice on his mind.

He quickly surveys the scene and rightly concludes that the culprits are two men (Stephan James and Taylor Kitsch) and that they still have to be somewhere in Manhattan. Then he effectively issues a lockdown of the entire island, including all of its bridges. Hence, the schlocky title of the film that is indicative of the overall storytelling, which includes the line, “Flood the island with blue!”

While TV vet Kirk depends on the audience’s empathy toward Andre, his dead father and his ailing mother (whom he cares for at his home), the director and writers also try to build the same level of compassion for James’ character, Michael, beginning in the film’s earliest moments at the scene of the crime. That’s evident by how much time the film spends with the two cop killers, Michael in particular.

He hesitates before killing an officer as his trigger-happy partner blindly riddles policemen with bullets. And it’s clear from the start that he’s terrified when he realizes the amount of drugs far exceeds what they were expecting, instantly casting a shadow on the deal and who’s really behind it.

So as Andre and his team close in on the criminals, the filmmaker attempts to assemble a case for Michael, though it’s so paper thin — replete with a deceased brother and something about his experience in the Army — that it’s both hard to follow and harder to care about. Maybe Michael is just a product of devastating circumstances, but trying to set up that arc after we’ve just watched him and his partner slaughter officers that catch them at the scene of a major crime is a giant leap that doesn’t pay off.

On top of that is, well, everything going on among Andre’s camp. Without divulging any spoilers, Andre’s reputation as the man who’s inherently on the side of the cops emboldens a unit that is — surprise, surprise — fraught with corruption. And one that is very messily interwoven with Michael’s storyline. This makes Andre, for perhaps the first time in his career, want to extend a hand to the perpetrator.

By the end of the film, the script also struggles to allow the cops to have some perspective in a forgettable thriller that is somehow both bloated and empty at the same time. (It’s baffling how this is not a January or February release.)

The cinematography by Paul Cameron (“The Commuter”) sleekly captures a nighttime Manhattan in gridlock yet brimming with police activity, including an adequately riveting subway chase. (But aren’t the subways supposed to be locked down too?) Still, the muddled plot undercuts any chance of “21 Bridges” being an edge-of-your-seat thriller, even as it attempts to answer the question: Where do your morals lie when the organization you’re vowed to protect is a fraud?

Though Boseman gives by far the most intriguing performance among a stunningly impressive array of actors that have found themselves in this subpar film — including Sienna Miller, J.K. Simmons, Keith David and Stephan James — he’s not given enough to work with to truly captivate. The same goes for the supporting cast that seem utterly lost in this bland story. (In addition, there are embarrassingly terrible New York City accents galore.)

Perhaps if “21 Bridges” just settled on being a mildly entertaining single-night cop thriller, it could have gotten by on its well-shot action scenes and A-list cast. But once it introduces concepts it’s unable to fulfill, it becomes a massive disappointment.