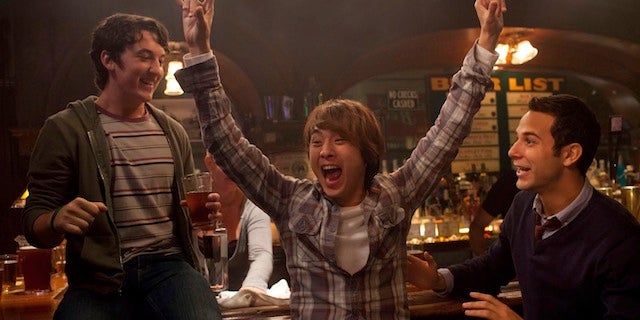 The clown always longs to play “Hamlet” and, apparently, the guys who wrote “The Hangover” want to end the beer blast with an honest talk about feelings and adult responsibilities.

At least that’s what happens in “21 & Over,” the directorial debut of “Hangover” writers Jon Lucas and Scott Moore, who prove themselves masters of on-screen debauchery while still facing a steep learning curve on poignancy. Still, “21 & Over” is a blast while the party’s on. Miller (Miles Teller, “Footloose”) and Casey (Skylar Astin, “Pitch Perfect”) surprise their high-school pal Jeff Chang (Justin Chon, “Twilight”) on his 21st birthday for a wild night of debauchery.

Jeff Chang (the use of his first and last names is a running gag in the movie) initially begs off since he has a med-school interview at 8 a.m. the next morning, arranged by his ultra-strict Tiger Dad Dr. Chang (François Chau) — but it doesn’t take much to talk him into just one beer.

One beer becomes two becomes shots, and soon the trio are burning up the town (the film was shot in and around the University of Washington) with a spree that eventually includes vengeance-minded sorority girls; irate pep squad captain Randy (Jonathan Keltz); seize-the-day sorority girl Nicole (Sarah Wright), who catches Casey’s eye; an out-of-control buffalo; and some of the most prodigious projectile vomiting seen outside of the oeuvre of John Waters.

So far, so good, and “21 & Over” distinguishes itself from many of its gross-out peers by giving us compelling characters (the friction between the rambunctious Miller and the buttoned-down Casey provides much of the comedy) and by allowing the occasional victims of our heroes’ bacchanal the chance to get their revenge.

Most male-privilege farces never give the other side a chance for rebuttal, but Lucas and Moore are savvy enough to give us both outrageous acts and legitimate consequences without being wet blankets about it.

Things do get sodden when Miller and Casey realize that Jeff Chang is perhaps more troubled than they realized, which leads them to contemplate that their friendship isn’t as close as it once was, and that in turn prompts conversations about their lives after college and whether or not they’ll all stay in touch.

There’s a movie to be made about such subjects, to be sure, but “21 & Over” twists itself into knots trying to be wild and sweet at the same time.

The parts that work, however, work very well, thanks mostly to the three engaging leads (all of whom are subjected to full dorsal and mostly frontal nudity over the course of their adventures). There are plenty of hilarious recurring jokes involving minor characters, particularly Randy’s unctuous yes-men.

“21 & Over” provides lots of fun while the beer flows. Too bad the R.A. felt like he had to come in and ask everyone about their major.