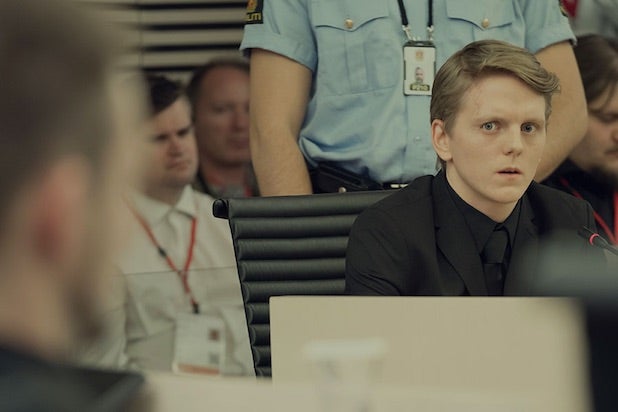 Paul Greengrass is the master of the moment, of a muscular and immersive style of filmmaking that plunges us into the thick of the action. But “22 July,” the Greengrass film that premiered at the Venice Film Festival last month, is a movie not about the moment, but about the aftermath.

Make no mistake, “22 July” is also immersive and visceral. But in its slow move from action to consequences, from terror to something close to healing, it feels new from the veteran British director.

This might be the first Greengrass movie that doesn’t just make you flinch, it makes you cry.

The film is based on the attacks carried out in Norway in July 2011: A far-right, anti-Muslim zealot named Anders Behring Breivik detonated a bomb near a government building in Oslo, and 90 minutes later went to a camp on the island of Utøya and killed more than 60 people, many of them teenagers. It was Norway’s most violent day since World War II, and it has already been the subject of a Norwegian film, the similarly titled “U – July 22” by Erik Poppe.

Poppe’s film never leaves the island, focusing on characters who rarely glimpse the shooter. Greengrass takes a less focused, more all-encompassing approach, which partly plays into his strengths and partly finds him reaching for new ones.

The director may have achieved his greatest commercial success with his three Jason Bourne movies — 2004’s “The Bourne Supremacy,” 2007’s “The Bourne Ultimatum” and 2016’s “Jason Bourne” — which set new standards for kinetic action filmmaking and are set in a destabilized world where order has been shattered.

But he’s also made a string of gripping films detailing some of the events that have shattered our own world in recent years: the Sept. 11 attacks in “United 93,” Somalian piracy in “Captain Phillips” and the U.S. invasion of Iraq in “Green Zone,” all of them examples of an urgent filmmaking approach that was honed on nonfiction television dramas and blossomed with 2002’s “Bloody Sunday,” about British military violence in Northern Ireland in 1972.

Breivik’s preparations are dealt with quickly, intercut with the lives of some of those who will become his victims, particularly the kids on the island. We’re quickly into the attacks, which are as harrowing and chaotic as you’d expect – but within the first 45 minutes of this nearly two-and-a-half-hour film, the killing has stopped and Breivik has surrendered to the police without resisting.

And that’s when Greengrass begins to explore a complex question: What happens now? What happens to the killer, who wants to turn his trial into a showcase for ideas he thinks will rid Europe of immigrants and end “enforced multi-culturalism?” To his lawyer, a family man compelled by duty to mount a defense of the indefensible? To Norway itself, which failed to notice warning signs that might have prevented the attacks? And above all, what happens to the families who lost children on the island, and to the teens who survived, terribly injured physically or emotionally or both?

This is where Greengrass takes his time, following several strands simultaneously. Some are more engrossing than others; the government investigation into what went wrong is a bureaucratic detour in a largely emotional journey.

But the film slowly zeroes in on two disturbing stories that slowly come together: the relationship between Breivik (the thoroughly creepy Anders Danielsen Lie) and his attorney (Jon Oigarden) as the trial nears, and the agonizingly slow recovery of Viljar (Jonas Strang Gravli) a teenage boy who miraculously survives despite multiple gunshot wounds, one that leaves bullet fragments perilously close to his brain stem.

It culminates in an unlikely arena that turns out to be the real center of this movie: the courtroom, where Viljar works up the resolve to confront his would-be killer. Using the hand-held style that has long been his trademark, Greengrass makes a young man’s five-minute speech as riveting as a “Bourne” fight scene; the action is internal, conveyed in glances rather than punches, but it nonetheless hits hard.

“22 July” is not always easy to watch — if the shootings don’t get you, the brain surgery might — but there are enough grace notes sprinkled through the telling to make this a genuinely affecting film even in the rare moments when the momentum flags or the choices give us pause. (All of the Norwegian characters speak a lightly-accented English, an artistic choice that seems both entirely justifiable and somehow beneath Greengrass.)

But for the most part, Greengrass is in total command with this chronicle of a horrific event and its lengthy, painful aftermath. This gifted director has immersed us in the moment in past films, but this time he’s in it for the long haul.