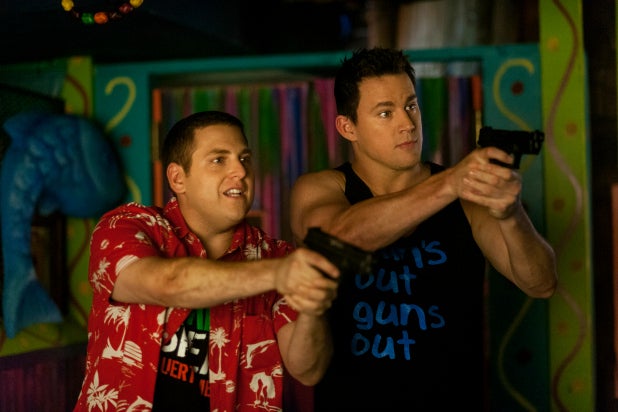 After surviving the police academy and a second stint in high school (in “21 Jump Street”), still-rookie cops Schmidt and Jenko (Jonah Hill and Channing Tatum), mismatched as a fuzzy slipper and a well-worn gym sock, head to the university dorms to find another drug dealer distributing a new pill around campus. “Do the same thing as last time, [then] everyone’s happy,” they’re told.

Fresh off February’s “The Lego Movie,” the directing and franchise-(re)inventing team of Phil Lord and Christopher Miller, who also directed “21,” deliver yet another boundlessly clever and playful comedy. A few of the self-referential gags get recycled one too many times, but an exuberant buoyancy — and the belly-laugh-a-minute pacing of the jokes — makes “22 Jump Street” a hilarious highpoint of an already quite funny summer season.

After a Marvel-esque opening that recaps “21” — and it’s definitely worthwhile to rewatch the marvelous original before heading to the multiplex, since the sequel refers to its events early and often — “22” sends Schmidt and Jenko off to the local state school to stamp out a popular new drug called “WHYPHY.”

Lord and Miller find the perfect balance between giving us more of what made “21” such a success and providing enough new material so that “22” doesn’t feel like a complete retread. Among the latter is a reversal of fortunes for the buddy cops; this time, it’s Jenko who finds his groove on campus (among some inoffensive lunkheads), while Schmidt discovers his emo side when abandoned first by his partner, then by the effortlessly cool girl (Amber Stevens) who’s not so sure about him in the cold light of day.

“22” also offers pitch-perfect satires of campus staples like the creepily earnest professor, the walk of shame, the lack of privacy between roommates, and slam poetry. Lord and Miller’s precise observations are matched by flawless casting (with help from casting directors Nicole Abellera and Jeanne McCarthy). The prominent inclusions of Jillian Bell as a hysterically nasty and later awkwardly sexual mean girl and identical twins Kenny and Keith Lucas as a goofy stoner duo make this project feel like an incubator for future comedy stars.

But “22” belongs indubitably to Tatum, who plays off Hill’s neurotic mole like a cross between an acrobatic superhero and a happy monkey. The crowd-pleasing actor has never been better, and this hulked-out version of Jenko exploits all of Tatum’s considerable strengths as a performer: his physical grace, his ready humility and joy, his impressive pelvic thrusts, and his particular brand of stupid genius.

Michael Bacall, Oren Uziel, and Rodney Rothman’s spry, witty script give Tatum one sidesplitting malaproprism after another. When Schmidt calls Jenko’s Lamborghini poster “a touch childish,” the meathead replies that he doesn’t know what Lambos have to do with “touching children.” Later, when their investigation is on the verge of being shut down due to lack of progress, Jenko tells their cross boss (Ice Cube), “I thought we had Cate Blanchett with the budget.” He meant “carte blanche.”

Though drugs are very bad and blah blah blah, “22 Jump Street” is less about the investigation than the complicated cocktail of guilt, co-dependency, and shared history that makes Schmidt and Jenko’s friendship both volatile and effervescent. It’s Jenko who pulls away first. He falls into a dopey but sweet platonic courtship, complete with sandwich-based “meet cute,” with a fratty football player (Wyatt Russell), who quickly becomes the jealous Schmidt’s prime suspect in the case.

In the end, though, Lord and Miller’s efforts to go bigger backfire on them. The special effects budget is duly wasted on some vast but empty explosions, and the running time is padded by too many repetitions of the same joke. Meta-commentary about how terrible sequels always are, and about how Schmidt and Jenko’s partnership resembles a gay relationship, pad the running time with bloat, as does a seemingly obligatory half-hour epilogue that squeezes in a few more car chases.

But I hardly minded, because the fact of the matter is that I laughed aloud for two hours straight, and “22 Jump Street” has cemented the Lord and Miller Experience, which is to chortle and guffaw while being distinctly impressed by their ingenuity and wit, both visual and verbal.

If “22” isn’t as trim and tight as its predecessor, it’s certainly smarter and more heartfelt. Whether this sequel is better than the original is up for debate, but the franchise has definitely grown up.