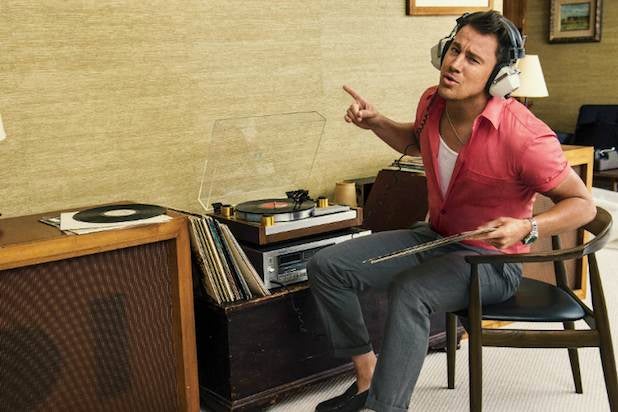 Channing Tatum spilled more than just “Magic Mike” sequel plot details in the June issue of GQ. The “22 Jump Street” star also admitted to being a “high-functioning” alcoholic, and opened up about how those drinking habits almost led to co-star Jonah Hill kissing the tip of his penis.

“I probably drink too much, you know,” the 34-year-old actor said in the cover story. “I’m probably a pretty high-functioning, I guess, you know, I would say, alcoholic, I guess.”

See video: Blockbuster Summer 2014: Can You Name the Movie Star?

Tatum, who also stars alongside Mila Kunis this summer in the Wachowski Starship’s latest science fiction film “Jupiter Ascending,” explains drinking helps his “creativity” and allows him to have “a good time.”

The married father of a 9-month-old child says parenting duties and his heavy workload force him to cut back on his alcohol consumption, but when the “Magic Mike” sequel wraps, “it’s go time.”

It was after “21 Jump Street” wrapped that Tatum made an unusual bet with Hill that he still has yet to cash in on. And probably doesn’t want to.

“I will kiss your tip!” Hill promised while boozing with Tatum and talking about their expectations for the domestic gross of the 2012 comedy. “I will kiss the tip of your dick through your underwear if we make $35 million.”

“I will confirm that there were many witnesses to this conversation,” co-director Phil Lord told GQ. “And my understanding from my lawyers is that verbal contracts are binding in a court of law.”

Hill isn’t exactly denying he made the bet. “I will only say that Channing and I say a lot of stupid stuff when we drink together,” he said

“I haven’t made him do it yet. For obvious reasons. That’s a bad bet to lose — it’s not too good to win, either,” Tatum said. “But definitely the shame of it would be enjoyable. It’s my trump card, for sure. He tries not to bring it up at all costs. Unless he did something horrible to me, I don’t know if I could ever cash it in. It would change our relationship forever.”