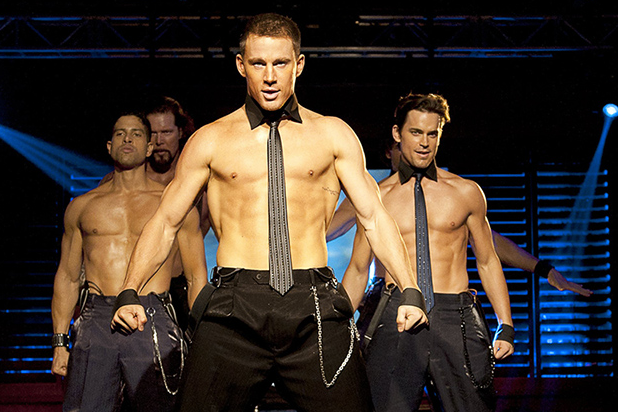 Channing Tatum promises that the sequel to “Magic Mike” will pack even more heat than the original.

The actor, who earned raves for his role in “Foxcatcher” at Cannes yesterday and appears in the upcoming “22 Jump Street,” is the subject of a long GQ cover story this month, in which he dishes quite a bit about the stripper sequel. Having previously disclosed that the film would be a sort of road trip movie, Tatum tells the magazine that “Magic Mike XXL” (as it’s rumored to be titled) is set at a series of stripper conventions inspired by ones he worked at during his own dancing career.

“The women would come from miles and miles around,” he says, noting that there would be 3,000 screaming ladies watching him remove his clothes and gyrate. “Then you lock the doors and you say all bets are off. It gets zany and crazy, and it’s a wild ride. It’s an incubator for insanity. It doesn’t matter almost what you do onstage. I don’t want to put anything in black and white on a page, but if you’ve been to one, you know how crazy it gets, and now pour kerosene on that. You’ve seen ‘Magic Mike’ — now multiply that. Mob mentality. It’s just exponentially crazier. I thought it was absolutely insane.”

One element that the sequel will be missing is Steven Soderbergh in the director’s chair — though the “retired” filmmaker, who produced the original along with Tatum, will still have a strong hand in the production. While producing partner Greg Jacobs will technically be at the helm, Soderbergh will be the camera operator, director of photography and editor. So, basically, it’ll still look exactly like the Oscar winner wants it to look — it just won’t have his name on it.