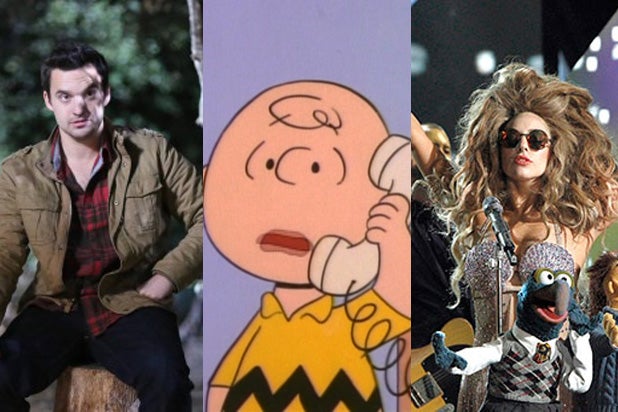 Pull on your elastic-waist jeans and plant yourself on the couch: It’s Thanksgiving week!

TheWrap has scoured the week’s television listings for the most holiday-propriate of the week’s specials, marathons and themed episodes possible.

Sure, there’s the usual suspects like “Rudolph,” Charlie Brown, The Muppets and the Macy’s Thanksgiving Parade.

But, the nerds living not-so-deep inside of us were excited to see “Harry Potter,” “Star Wars” and “Iron Chef America” offerings, as well.

See below for our picks for the best of Thanksgiving week TV:

Tuesday
“Christmas Bounty,” 7/6c, ABC Family
Francia Raisa (“The Secret Life of The American Teenager”) plays a former bounty hunter forced out of retirement when she finds out one of her biggest enemies is on the loose. The original movie also stars WWE and former “Real World” castmember Mike “The Miz” Mizanin. It’s probably not winning any Emmys anytime soon, but, duh, perfect holiday fare.

“Rudolph the Red-Nosed Reindeer,” 8/7c, CBS.
This is the classic anti-bullying story – way before that got trendy.

“Brooklyn Nine-Nine,” 8:30/7:30c
Amy (Melissa Fumero) wants to host a Thanksgiving dinner for the entire precinct, but it turns into a holiday disaster when Holt (Andre Braugher) and Jake (Andy Samberg) must leave to go catch a perp. So, Boyle (Joe Lo Truglio) steps in to save Turkey Day.

“New Girl,” 9/8c, Fox
The crew decides to go camping for Thanksgiving, like the first pilgrims.

“Swamp People: Swampsgiving,” 10/9c, History
What are the various Thanksgiving traditions of the Bayou while it’s off-season for gators? Here’s your chance to find out.

“Tosh.0,” 10/9c, Comedy Central
Prepare yourself for Robert’s launch of his new celebrity-packed movie, “Thanksgiving” – which stars Robert in every role.

Wednesday
“The Price Is Right: Thanksgiving,” Check your local listings
Celebrity chef Marcela Valladolid returns to the show after she first appeared as a contestant in 2004 — she even won a car! This time around, she’ll share some Holiday-themed prizes as well as trips to her favorite culinary destinations.

“American Pickers” Marathon, History, 11 a.m.-10 p.m., History
Ride shotgun with Mike and Frank as they go picking through the hidden treasures down twisted roads and in backyard sheds. Get through all the episodes and you’ll end up with a new one at 9/8c.

“Duck Dynasty” Marathon, Wednesday from 7 p.m.-4 a.m., A&E
Thrown the turkey in the oven and wait it out with the ducks. Marathon continues Thursday from 6 p.m.-4 a.m.

“The Making of The Sound of Music Live!,” 8/7c, NBC
Someone at NBC realized that just one night of “The Sound of Music” wasn’t going to cut it. So, they announced this “making of” special days before airing it. It’s like the DVD bonus content: Carrie Underwood, Stephen Moyer and the cast go through casting, rehearsals, and the making of the CD.

Thursday
Dueling Thanksgiving Day Parade coverage, 9 a.m./8c ET, CBS and NBC
Guess it depends on which team you can stand listening to for three hours. NBC has Al Roker and Hoda Kotb while CBS’s coverage will be anchored by “omg! Insider’s” Kevin Frazier and Thea Andrews. That isn’t too tough a decision, is it?

“A Hollywood Christmas at The Grove,” Check your local listings
Hosted by “Entertainment Tonight’s” Nancy O’Dell, the holiday special recorded at The Grove in Los Angeles will include performances by Mary J. Blige, a duet by Toni Braxton and Kenny “Babyface” Edmonds, Gavin DeGraw, CeeLo Green and Jewel.

A double helping of Charlie Brown, 8/7c, ABC
It’s an hour with Snoopy with “A Charlie Brown Thanksgiving” and “This Is America, Charlie Brown” airing back-to-back.

Also read: Stephen Colbert Is Not a Fan of Thanksgiving and Hanukkah’s Same-Day Premiere

Punkin Chunkin’ 2013, 8/7c, Discovery
Now, this is good ol’ American fun and ingenuity. Discovery’s annual pumpkin-tossing contest challenges participants to use their science and engineering skills to launch a pumpkin the furthest.

“A Mary Christmas,” 8/7c, Revolt TV
One hour of Mary J. Blige? Now, that’s what I call giving thanks. Premiering on Thanksgiving night at 8pm eastern, “A Mary Christmas” will feature Mary as she shares her magical take on Christmas classics, along with special guest Tyrese and host Queen Latifah.

“Lady Gaga & The Muppets’ Holiday Spectacular,” 9:30/8:30c, ABC
Sure, why not? Lady Gaga performs from her new album, ARTPOP, including a duet with Kermit the Frog. She’ll be joined Elton John and RuPaul, among others, for the 90-minute special.

“Grandma Got Run Over by a Reindeer,” 8/7c, The CW
Based on the catchy holiday song that gets stuck in your head and drives you nuts. Also, tell us if you see a bit of a trend forming for Friday’s programming.

“Dr. Seuss’ How the Grinch Stole Christmas,” 8/7c, ABC
It’s Black Friday and the focus moves to Christmas. Drown your sorrows with the Grinch.

“Shrek the Halls,” 8:30/7:30c
Watch the Dreamworks special in which Shrek is being a real ogre about Christmas, but really wants to get into it for his family. Sound familiar?

“Iron Chef America: Ghosts of Holiday Ingredients Past,” 10/9c, Food Network
Not only a holiday episode, but also a crossover one. The Iron Chefs pair up with Cooking Channel chefs for this one.

Sunday
“Bill Cosby: Far From Finished,” 10/9c, TV Land
Perfect for holiday sweater weather! Cosby is back with his first full-length stand up program in more than three decades. Expect to hear his hilarious and unique point of view on relationships, marriage and of course, children.

“Keeping Up With the Kardashians: A Very Merry Christmas,” 8:30/7:30c, E!
The whole gang is coming, except for, funny enough, Yeezus. The gang revisits their earliest holiday memories.