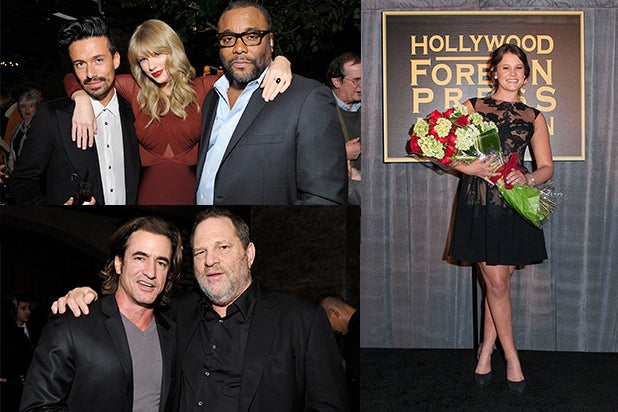 On Golden Globes night, the Weinsteins and InStyle throw simultaneous bashes at the Beverly Hilton, the two most hotly contested lists after the credits roll on the show.

The Weinstein Company celebrated all their 2013 films at a holiday party with an early bird start at 5:00 p.m., followed by InStyle and the Hollywood Foreign Press Association announcing Kevin Bacon and Kyra Sedgwick’s daughter Sosie Bacon as the new Miss Golden Globe. Mark Wahlberg, Colin Farrell, Jeremy Piven, and Kellan Lutz were among the attendees celebrating at Fig & Olive in West Hollywood.

It was even dark and rainy, just like January. Here’s the best parts of both bashes:

You know it’s been a good year when you have so many films in the hunt that you have to acknowledge all the colleagues and collaborators that made them in alphabetical order.

That’s what Harvey Weinstein did as he took the mic at Riva Bella, fresh back to L.A. from a “Mandela: Long Walk to Freedom” screening at the Kennedy Center in D.C. on Wednesday.

The roll call of collaborators in the room ran from “August: Osage County,” “The Butler,” “Fruitvale Station,” “The Grandmaster,” “Mandela: Long Walk to Freedom,” “One Chance,” and “Philomena,” all the way through to “Unfinished Song.”

I may be the only person deploying an internal applause-o-meter, but “Fruitvale” got the loudest pop and cheer from the intramural crowd when announced.

The one Weinstein left out? “12-12-12”, the rock-doc about the Hurricane Sandy relief concert, the one film he stars in.

“I didn’t want to plug my own thing,” he said afterwards.

Taylor Swift Makes Everyone Lose Composure, But Keeps Hers

Taylor Swift turned up at the Weinstein party and many degenerated in to “Hunger Games” fans. Blonde and towering over the crowd, she couldn’t move much for an hour, as guests broke protocol and barraged her with cameras in hand.

She deserves a nomination for the patience award, taking all comers, as did her scary looking security detail (not huge, just with a glint of Jason Bourne bone-breaking ability) who lingered in her blind spots.

What was she doing there? Swift wrote a song for the Weinstein film “One Chance,” about a singer chasing his dreams on “Britain’s Got Talent.” She’s in the fold, having celebrated with Julia Roberts and the cast of “August: Osage County” at Soho House in Toronto, following that film’s world premiere on the Monday at TIFF.

Jane Fonda: “I burst in to tears”

That’s how Jane Fonda (who plays Nancy Reagan in “The Butler”) told me she reacted to finding out she’ll be receiving AFI’s prestigious, “This is your life (in movies)” Lifetime Achievement Award next June.

She should have kept another tissue handy, because AFI sent her six previous tributes to watch, and she made the self-admitted mistake of watching Meryl Streep’s year first.

Her “9 to 5” costars are figuring in to her plans.”Dolly (Parton) and Lily (Tomlin) will save me,” she said.

James Marsden hugs it out  with Cuba Gooding Jr.  Marsden played JFK in “The Butler”, an eerie timing coincidence on the eve of the  assassination anniversary.

Others circling up around the passed champagne and lamb chops included Misty Upham, Julianne Nicholson, Dermot Mulroney’s son, and Juliette Lewis, who made a line for playwright Tracy Letts as soon as she walked in (repping team “August: Osage County”)

Hinting at the quickly approaching awards nominations, Weinstein put an articulate bow on his big year telling his guests this:

“Win lose or draw – trust me – there is no draw or lose (chuckling), because we won by making these movies and having the American public accept them.”

Besides an anecdote about Judi Dench pulling her pants down at the Four Seasons in New York to show a tattoo on her butt that says “I Love Harvey,” the other big laugh-line had to do with the reviews for Philomena, which opens today.

“L.A. Times (review) is a rave, New York Times is a rave,” Weinstein said. “If anyone doesn’t think it’s a rave, come see me on the way out…we have cash.”

At the same time as the Weinstein bash, the Hollywood Foreign Press was announcing Kevin Bacon and Kyra Sedgwick’s daughter Sosie Bacon will be handing out trophies as Miss Golden Globe on January 12. The secret held for a month.

HFPA president Theo Kingma (above left) told me the idea for Sosie hatched months ago, back in the summer. Bacon found out she got the gig right after a meeting/interview with Kingma.  She once sat next to Globes host Amy Poehler at an awards show, but doesn’t think Amy will remember her.

Bacon says she told a few of her close friends, who proved to be leak-proof. The gobo maker who made this light screen must have had a tight NDA also.

After the Miss Golden Globe announcement, InStyle and the HFPA threw a glossy bash to kick off Golden Globes season, revved up from last year’s edition at Cecconi’s.

Mark Wahlberg, a contender for “Lone Survivor,” went right to popular HFPA member Munawar Hosain when he arrived. Hosain brokered introductions between the perennially casually-dressed Wahlberg and Abigail Breslin, who like Hosain, had come over from the Weinstein event.

Nearby, Wahlberg’s recurring “employee” Jeremy Piven held down real estate in the “center field” area of the big room, spending a lot of time with in a one-on-one with Colin Farrell.

The carpet in the alley was no joke for this party, presented by Aquafina Flavorsplash. This is bigger than many film premieres.

The herculean Kellan Lutz is back in L.A. ahead of hosting the upcoming Saving Innocence gala.

James (“Jimmy” as his pals call him) Marsden and Lizzy Caplan inside InStyle.

Pharrell Williams suffered the same fate as Swift — everyone wanted a photo with him. Musicians have swagger.

Not on the Homefront

Meanwhile in Vegas, James Franco showed his lucky cards as he gathered with co-stars Jason Statham, Kate Bosworth, and Winona Ryder ahead of the Vegas premiere of “Homefront” on Wednesday. They got a customized table at Planet Hollywood.

Honk! The AMA’s Are Coming

The American Music Awards take over the L.A. Live plaza in the midst of the always oddly-timed-over-Thanksgiving LA Auto Show.

Tying those two together is Carly Steel, who had to duck out of Audi’s pre-show (auto, not AMA) party early, a posh event under a tent on the London rooftop on Wednesday night, for early AMA red carpet rehearsals.