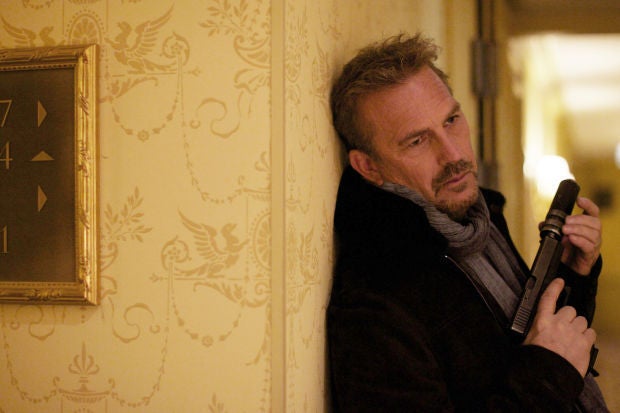 If you saw the trailers for “3 Days to Kill” and thought it looked like an absolutely absurd action thriller, then rest assured, because the majority of critics have confirmed those suspicions.

“Ridiculous,” “indigestible,” “incoherent” and “terrible” are among the adjectives used to describe director McG’s movie, which has accumulated a 28 percent “rotten” rating Rotten Tomatoes. Out of 47 movie critics (so far) who sat through 100 minutes of Kevin Costner shooting his way through Paris to get his hands on an experimental drug to cure him of brain cancer so he can finally be the father his teenage daughter (Hailee Steinfeld) deserves, 34 were not impressed.

TheWrap‘s Todd Gilchrist was among the majority taking shots at the international spy thriller about a retired American CIA agent named Ethan Renner who has one weekend to kill an arms dealer.

“McG’s latest is an ambitious disaster that tries to be two things at once — an action movie and a domestic comedy – but does neither well,” Gilchrist wrote in his review. “Superficially, the notion of a covert operative trying to balance his professional and personal lives is one ripe with potential … But screenwriters Adi Hasak and Luc Besson, who previously worked together on ‘From Paris With Love,’ have zero sense of how to combine humor with pathos, instead opting for a dizzying tone that whips haphazardly from goofy dunce-dad scenarios to brutally violent shootouts to tearful reconciliations to vampy surrealism.”

Toronto Star critic Peter Howell also found the mixture of genre ingredients to be too overwhelming.

“Long before Kevin Costner is demanding pasta sauce info at gunpoint from a terrified Italian hostage in ‘3 Days to Kill,’ it’s obvious no one is following any kind of coherent recipe for this movie,” Howell wrote. “It’s an international spy thriller. On second thought, it’s a family divorce drama. No, wait, it’s a comedy about wacky Americans in Paris. But then again, should we be laughing about a guy dying of brain cancer? ‘3 Days to Kill is all of these things, because it seems writer/producer Luc Besson (the ‘Taken’ franchise) and director McG (‘Charlie’s Angels,’ ‘This Means War’) were too busy mixing ingredients from their own past movies to agree on what they were jointly trying to concoct here.”

New York Times critic A.O. Scott also found the film to be every bit as “terrible” as his critical colleagues, but at least he found a silver lining for any ticket buyers willing to work really hard to suspend their disbelief that anything happening on screen is remotely plausible.

“By any reasonable standard, ‘3 Days to Kill’ is a terrible movie: incoherent, crudely brutal, dumbly retrograde in its geo- and gender politics. But it is also, as much because of as in spite of these failings, kind of fun,” Scott wrote. “There is nothing remotely believable about Ethan — as a father, an expatriate or, goodness knows, an agent of American policy — and yet when he studies the grooves on a vinyl phonograph record, or gives his daughter a belated bike-riding or just-in-time-for-prom dance lesson, or beats up the creeps who are assaulting her in the bathroom of a rave club, you may feel the stirrings of a familiar affection.”

Also read: Oscars Dilemma: Is It OK to Joke About Slavery?

That’s a valid point to make, too, considering most people who will be lured into theaters this weekend probably only care about the premise’s promise of killing and Costner. According to Detroit News critic Tom Long, the movie manages to meet those low expectations, so those entering the theater with that mindset might walk away pretty satisfied.

“‘3 Days to Kill’ should come off as stretched in too many dumb directions. But somehow the thing works, or at least works as well as any thoroughly absurd action-comedy February release has a right to,” Long wrote. “It’s Costner’s droll sense of self-awareness that makes the movie work. He’s sharing a joke — a joke of a movie, really — with the audience, there’s none of that Liam Neeson this-really-matters intensity. And it doesn’t, so just sit back and enjoy. ‘3 Days to Kill’ is big dumb fun anchored by a good actor’s refusal to take himself too seriously.”