Warner Bros. and Legendary Pictures’ R-rated sword-and-sandals saga will knock the Liam Neeson thriller “Non-Stop” out of the top spot and easily beat the weekend’s other wide opener, DreamWorks Animation’s “Mr. Peabody and Sherman.” The family movie, based on the 1960 cartoon, debuted with $8 million Friday and should hit $30 million for the three days, which is at the high-end of projections.

“Peabody” received an “A” CinemaScore from first-night audiences, while the “300” sequel got a “B.”

On the specialty front. the Wes Anderson ensemble comedy “Grand Budapest Hotel” got off to a terrific start for Fox Searchlight, bringing in $260,477 from two theaters in New York, and two more in Los Angeles. That’s a $65,119 per-screen average which, if it holds up on Saturday and Sunday, will become one of the biggest limited openings ever. Bill Murray, F. Murray Abraham, Ralph Fiennes, Adrien Brody, Willem Dafoe, Saoirse Ronan and Tilda Swinton star in the film.

The opening of “Rise of an Empire” won’t be close to the first weekend of the original “300,” but it’s impressive given that it’s been seven years since the Zack Snyder-directed film landed with a stunning $70 million in March of 2007. Noam Murro directed “Empire,” which Snyder wrote and produced. Sullivan Stapleton and Eva Green star in the tale, which focuses on a huge sea battle between the ancient Greeks and invading Persians.

It was in 3,470 theaters and, with many of them 3D and 343 Imax screens, the ticket up-charges had to be helping the film, which has the same ultra-stylized look of “300.”

The original brought in more than $456 million worldwide, with $245 million coming from overseas. “Rise of an Empire” could do even better abroad, and is off to a fast start. After two days in release it had taken in $12.1 million and ranked No. 1 in 29 of 31 markets, including France, Germany, Russia, Australia and Korea. 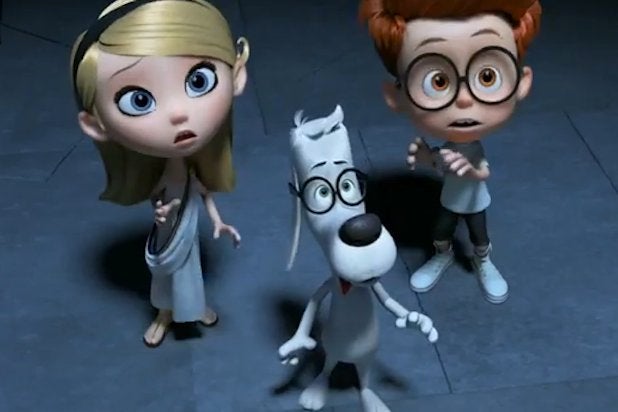 Universal’s airplane thriller “Non-Stop” took in $4.6 million Friday, off 54 percent from its opening, and is looking at a $15 million second week and third place.

The solid showing by “Mr. Peabody and Sherman” (which distributor Fox had in a market-high 3,934 theaters) came despite the presence of “The Lego Movie,” Warner Bros.’ animated hit that is still in 3,290 theaters. “Lego” brought in $2.3 million on Friday, upping its domestic total to $216 million — with more than $345 million worldwide.

“The Lego Movie” beat out Mark Burnett’s Biblical saga “Son of God,” which took in $3.2 million Friday, a whopping 70 percent drop from its opening last week. The pared-down version of the History Channel miniseries “The Bible” will wind up with a $9 million second weekend, and should cross $35 million domestically for Fox.

Fox Searchlight added 654 theaters for its Oscar Best-Picture winner “12 Years a Slave,” and the film brought in $580,000 from 1,065 locations. That projects to a $2.3 million haul for “12 Years,” which has taken in more than $51 million domestically and another $90 million overseas.