“Ant-Man and the Wasp,” with its colorful, almost cosmic presentation of the microscopic world its titular heroes buzz through, looked like the sort of film that would best be enjoyed with 3D glasses on.

But the weekend box office numbers showed that really wasn’t the case: Only 17 percent of its $75.8 million opening weekend gross came from 3D ticket sales — way less than the 47 percent for Marvel’s “Doctor Strange” or signature films like “Avatar” at the height of the premium format.

Since James Cameron’s megahit rejuvenated modern 3D — and forced theaters to shell out millions of dollars to retrofit auditoriums — interest in the format from American moviegoers has gone up and (mostly) down. Peaking at $2.2 billion and a 21 percent market share in 2010, 3D revenue in the U.S. has been on a downward trend — accounting for just $1.3 billion and 12 percent of box office revenue last year.

Also Read: 'Ant-Man and the Wasp' Buzzes to $76 Million Opening at Box Office 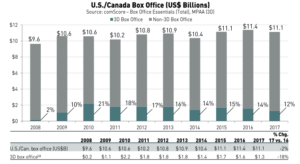 On top of that, IMAX announced last year that it would be largely moving away from 3D technology, saying that its audience showed a clear preference for standard IMAX screenings. In the case of some films like “Blade Runner 2049,” IMAX eliminated 3D screenings altogether.

So in the face of all this, how is 3D moviegoing still an $8 billion per year business? One reason is that while many Hollywood wide releases today only add 3D nominally or convert the format into 3D in postproduction, there are still a few releases each year that actively incorporate and promote 3D to the point that audiences respond.

Universal’s two “Jurassic World” movies are a prime example. RealD, which now sits as the top 3D distributor with IMAX exit, reported in 2015 that the first “Jurassic World’ saw nearly half of its North American audience see the film in 3D. Last month, that film’s sequel, “Fallen Kingdom” was released, with RealD reporting that approximately 50 percent of the film’s $1 billion-plus global gross has come from 3D screens.

Another movie that got a boost from 3D was Marvel’s “Doctor Strange,” a film with psychedelic, mind-bending imagery that created a buzz among audiences to pay the extra bucks to watch it with glasses on, resulting in 46 percent of its $85 million domestic opening coming from 3D sales.

“Like everything else in the exhibitor industry, 3D is content-based,” said comScore’s Paul Dergarabedian. “Just like how good word-of-mouth is needed to get people in to see the film, it’s also needed to get them to spend the extra money to see it in 3D. Sometimes you can really see the format’s influence in a blockbuster’s numbers, but other times it feels like it doesn’t add more to the experience.” 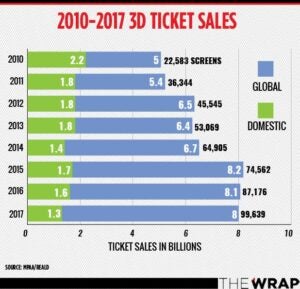 But in overseas markets, especially China and Russia, the novelty of 3D has not worn off. As new cineplexes in developing markets open, the appeal of seeing a film in 3D is far greater than in the U.S., which got saturated in 2010 with 3D films and home technology. (In 2009, prior to the release of “Avatar,” there were 9,000 3D screens worldwide. Nearly a decade later, that count is on the verge of passing 100,000.)

In 2017, global 3D sales hit $8 billion for the third year in a row, with overseas markets contributing 83 percent of that total. That’s more than double the $2.8 billion that came from outside North America in 2010.

3D might not be the industry-changing boom it may have seemed to be at the start of the decade and may be seen as a fading fad in America, but with global grosses for the format continuing to hover around 20 percent of total box office gross, it’s clear that the glasses won’t be going away anytime soon.

RealD has renewed its partnership with Cinemark through 2021, and AMC will also allow subscribers to its new ticket subscription program to see films in 3D without paying an extra charge.

But Dergarabedian said that unless the movies themselves provide the draw, 3D will likely rely more and more on overseas interest.

“Next year we might see some more films drive 3D sales like ‘Avengers’ and the ‘Lion King’ remake, but it’s on the studios to make films that give that sense of awe and immersion that ‘Avatar’ and ‘Doctor Strange’ provided.”