Because the industry loves to define by their differences any directors who aren’t straight white men, the easy takeaway from Andrew Haigh‘s exemplary work on the 2011 indie hit “Weekend” (and, later, on HBO’s “Looking”) was that the British filmmaker was talented at crafting gay love stories.

With “45 Years,” though, even the most egregious pigeonholers will amend their description of Haigh as talented, period. If anything, this haunting new drama (adapted from a short story by David Constantine) spotlights the filmmaker’s skill not merely as a chronicler of contemporary gay life, but rather as a master of the two-hander: stories with a pair of protagonists whose secrets and yearnings and backstory emerge through organic conversation.

Also Read: Charlotte Rampling Eyes an Oscar and Looks Back: 'I Didn't Go the Hollywood Trail'

“Weekend” was almost entirely made up of two-person scenes that were simultaneously natural and revelatory, and many of the best moments of “Looking” were structured in the same way. “45 Years” sees Haigh’s abilities matched with two of the greatest living icons of British cinema, and the results are quietly explosive.

Kate (Charlotte Rampling) and Geoff (Tom Courtenay) are about to celebrate their 45th wedding anniversary with a big party. (They would have had one for their 40th, but Geoff had health problems at the time.) While Kate juggles a million details from the dress to the DJ, a bomb goes off: Geoff receives a letter telling him that the body of Katya, his girlfriend before Kate, has been found frozen in a Swiss glacier.

Katya had fallen into a fissure when the two were on a walking tour in 1962, and Geoff is considered her next of kin, since the two had pretended to be married at the time. This is the first Kate has heard about them passing themselves off as a wedded couple, but she tries to push the incident aside. 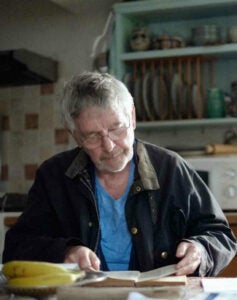 Even as Kate and Geoff — who never had children — prepare for the party and enjoy reminiscences about their life together, Kate notices that Geoff can’t stop thinking about Katya: he starts smoking again, he searches through the attic for old pictures of her, he starts acting very bitter about getting old and about his friends’ aging.

Kate begins to realize how much this woman she never met has influenced her marriage, and it’s a slowly-dawning tragedy: the Sensuous Woman discovering that she is, in fact, the second Mrs. DeWinter, or worse, Jane Eyre. And as wrenching as the story becomes, it’s all the more engrossing thanks to Haigh’s understated script and direction.

In the same way that watching a spectacularly bad movie can remind you how you take continuity and sound editing for granted, a well-crafted film highlights the mistakes so often made by others. There’s no narration here, no exposition-dump best friend in whom either character can confide — Geraldine James comes close as Kate’s pal Lena, but there’s only so much Kate feels comfortable telling her — and instead we glean everything we need to know by paying attention to what Haigh includes in the frame, even if it’s as fleeting as the narration of a pensioner’s riverboat tour.

Most essential to telling this story are Rampling and Courtenay, both of whom convey pages and pages of backstory and emotion with the most fleeting of glances. The two very quickly establish the routines of this long-married couple, making it clear how the new revelations have thrown their world asunder in small but significant ways. This is the kind of acting for which the cinema exists, and Lol Crawley’s camera catches each tiny moment as it flickers across their faces. (Rampling has perhaps the meatier role, but both actors give extraordinary performances — they each received the top acting prize at the Berlin Film Festival earlier this year.)

“45 Years” has so much to say about growing old and past regrets and relationships, and its power comes from articulating so little of that in words. This film is an actors’ showcase, to be sure, but it also heralds Andrew Haigh as a keen observer of the human heart — gay, straight or otherwise.