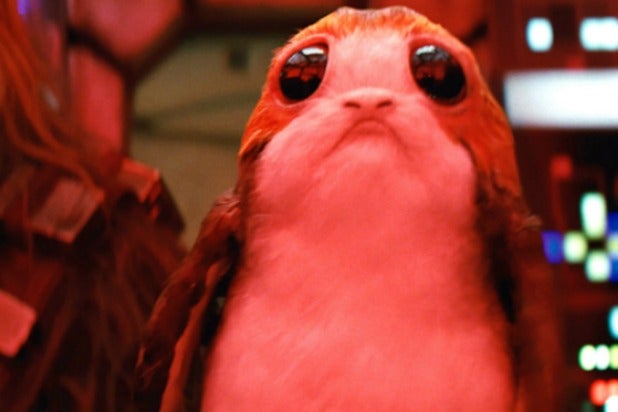 On Thursday, Disney and LucasFilm announced that Rian Johnson, director of this year’s “Star Wars: The Last Jedi,” will take the creative reins on a new “Star Wars” trilogy that will be “separate from the episodic Skywalker saga.” Disney says instead that “Johnson will introduce new characters from a corner of the galaxy that ‘Star Wars’ lore has never before explored.”

The details were super sparse — there was no mention even of timing for when this whole thing will kick off. So we’re left with many questions and generally have no real clue what’s actually going on here.

So in the interest of keeping all our ducks in a row, we’ve narrowed down the list of things we’re wondering about to big-picture questions we think will help sum up the situation as it stands right now. So here we go.

The bit about this trilogy being “separate from the episodic Skywalker saga” indicates that the numbered movies will continue and Johnson’s trilogy won’t function as a sequel or something. But the lack of any mention of the current wave of standalone movies (“Rogue One” and “Solo”) tells me that the age of one-shot “Star Wars” movies will be over after the current cycle, replaced by this trilogy that will be released in alternating years alongside Episodes X, XI and XII.

It makes a lot of sense from a corporate standpoint: it’s gonna be tough to keep selling Jyn Erso toys in the future since she’s dead and won’t be in any more movies probably (though I wouldn’t count out a “Solo” cameo since that takes place before she died). This way, Disney gets to keep on a yearly schedule for the franchise while also ostensibly making the “Star Wars” toy empire a better investment.

The main purpose of asking this question is to determine the fate of the unannounced standalone movie we’ve been expecting to land in 2020 (the buzz being that it’s an Obi-Wan prequel). My guess would be that movie is a casualty of this announcement, and that Rian Johnson’s new deal will start in 2020, for reasons I will explain in depth below.

3. If the new trilogy is not replacing the standalones, would that mean we’re gonna start getting more than one “Star Wars” movie a year?

This could be the next step in Disney’s decades-long quest to dominate the entertainment world with its gargantuan franchises. They could accelerate the “Star Wars” release schedule from one movie a year to three movies every two years — or two a year with one standalone every summer and the trilogies alternating in December — nicely complementing the multiple Marvel tentpoles they have lined up in perpetuity.

4. How will the new trilogy tie into the numbered Skywalker saga?

So here’s the thing about the wording of Lucasfilm’s claim that Johnson’s trilogy will be “separate from the episodic Skywalker saga” and “introduce new characters from a corner of the galaxy that Star Wars lore has never before explored”: that sounds far more exotic than it probably really is. If Lucasfilm is making a change, it’s probably in order to make its entire lineup of films into a more cohesive unit.

So while it may bring something fresh to the table, it’s not likely that it will exist totally separate from the numbered movies. That’s just not how corporations trying to make billions of dollars a year off a single property operate. No, this new trilogy will have to have some kind of immediate relevance to the ongoing main saga beyond just branding.

My guess is that Johnson’s new trilogy will stem from something he came up with for “The Last Jedi” — a new Force religion, perhaps? — and will tell a story that is intended to flow in narrative parallel with the next numbered trilogy. That’s why I believe Johnson will kick this off in 2020 — it will run off some concept touched upon in “The Last Jedi” and “Episode IX” and contain some kind of lore that ends up being important to all of the next cycle of movies. If that’s the case it would need to start before “Episode X” because they would want “Episode XII,” the last part of the next saga trilogy, to be the culmination of whatever they’re doing.

5. Are there actually even answers to these questions right now?

It’s pretty weird that they would announce this new trilogy without a release schedule. When Disney took over the franchise back 2012 it had its dates in order immediately — part of the announcement of the Lucasfilm acquisition was the 2015 start for a new trilogy. The process of continuing the franchise has been seemingly haphazard ever since, as all three of the new numbered movies were originally announced for release in May before being bumped to December. Meanwhile, “Solo” is still scheduled for May 2018 for some reason, a strange outlier in all this.

Which leads me to believe that the announcement of a new trilogy without a planned start year means that Disney’s plans for “Star Wars” beyond 2019 aren’t remotely set in stone. There’s still no movie officially on the docket for 2020 even though we’ve been expecting, and the next numbered trilogy hasn’t even been officially announced (though we can safely assume it’s coming). “Star Wars” in the age of Disney has been constantly in flux (you can check out our list of behind-the-scenes upheavals here), and right now there’s probably even a non-zero chance that Rian Johnson’s trilogy will actually not happen. Like if everyone hates “The Last Jedi” the overlords may change their minds about making such a heavy investment in Johnson.

For now, it feels like everything is still up in the air and we don’t really know anything about anything. Welcome to the new age.