So here we are, just two months away from “Star Wars: Episode IX – The Rise of Skywalker” — and its second and final trailer landed Monday night.

And it’s surprisingly hard to glean much in the way of even basic plot info from it. This trailer is largely just a montage of cool-looking scenes while unrelated snippets of dialogue play over them, more like what you’d expect from a reveal teaser than a full trailer. So it’s a little more difficult than usual to make a list of things we learned from it. But we did learn some things. Let’s dig in.

They just aren’t going to tell us what this movie is about, huh

I’m kinda a broken record on this point, but I can’t get over it. Disney is going hard in the marketing for the idea that “Rise of Skywalker” is the end of the main series of movies. “THE SAGA WILL END,” the trailer screams. “THE STORY LIVES FOREVER.” It’s just remarkable that they would keep doing this weird secrecy thing despite the attempt to hype us up with that sort of rhetoric in the marketing. It’s demonstrative of how inorganic the storytelling has been in this new trilogy that we don’t have any idea where this movie might go beyond just “the good guys and bad guys are gonna fight some more.”

Despite this being the full trailer, we got no more info about the story than we got from the teaser. Even the official synopsis is pointlessly vague: “Lucasfilm and director J.J. Abrams join forces once again to take viewers on an epic journey to a galaxy far, far away with ‘Star Wars: The Rise of Skywalker,’ the riveting conclusion of the seminal Skywalker saga, where new legends will be born and the final battle for freedom is yet to come.” In other words: it’s another “Star Wars” movie.

It’s not clear how many different locations we saw

Part of the reason it’s difficult to infer much about the plot is because this trailer obfuscates the locations and it’s tough to figure out what’s happening where. I believe there’s at minimum three, ah, galactic bodies in this trailer: wherever the iceberg thing is, the desert planet that we saw in the teaser earlier this year, and wherever that Death Star wreckage is. There’s also, of course, spaceships.

It would make sense for the wooded parts to be on the moon of Endor from “Return of the Jedi.” And I wouldn’t be surprised if that moon is also where the body of water containing all that Death Star wreckage is. Which would mean the moon of Endor would have an Earth-like ecosystem with lots of variety rather than the standard “Star Wars” desert planet, jungle planet, water planet, city planet and so forth. Remember, though, I just said there were three at minimum. There could certainly be more — and I could be very wrong about the moon of Endor.

Let’s go through the possibilities. Here’s the desert planet:

Here’s the forest planet Rey (Daisy Ridley) is running around on at the beginning of the trailer:

Note that there are several other shots in similar environments, but they might not be the same place.

Also Read: It's Weird That We Don't Know What 'Star Wars: The Rise of Skywalker' Is About

Here’s the spot where the Death Star wreckage is:

I should remind you that even if that’s not the moon of Endor we know, it’s also not a water planet. In the previous teaser we saw Rey, Poe (Oscar Isaac) and Fin (John Boyega) looking on at the wreckage in the water from land: 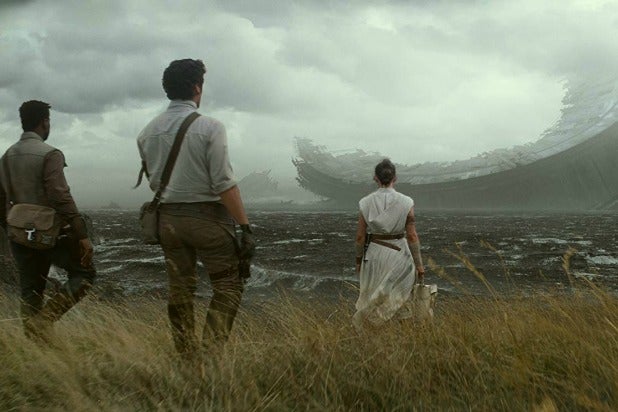 And there are parts that I’m not quite sure how to track, like this shot:

The Resistance folks here are just tromping around on that Star Destroyer on the backs of space horses, so this shot is obviously not in space. It looks stormy and all that, so I can imagine that happening in the atmosphere above the Death Star wreckage.

The iceberg thing is also a wild card. Could it be some kind of weird space station? The actual planet Endor, which the forest moon from “Return of the Jedi” orbits around, is a gas giant, and maybe that ice facility is floating on heavy gases in its atmosphere. And with that shot of a Star Destroyer breaking out of the ice, it could stand to reason that the above image might be above that iceberg station instead. But all this is just wild guessing, so I’m gonna move on.

They got a new fleet, from a novel

So you remember how at the end of “The Last Jedi,” the Resistance had effectively been wiped out? Well, it looks like our heroes spent the time between movies flying around casually making a new Resistance somehow. But that’s not going to happen in “The Rise of Skywalker.” Instead, you’ll be able to read that story in the novel “Star Wars: Resistance Reborn” when it hits shelves on Nov. 5.

The gang finally gets together

Despite Rey, Fin and Poe being the main characters of this new “Star Wars” trilogy, they have actually spent very little time together on screen so far. But that looks to change now, as we see the trio, along with Chewbacca, all settle into the cockpit of the Millennium Falcon as they prepare for whatever it is they’re gonna do. It’s nice.

Pretty disconcerting moment at the end of the trailer when we see Rey facing off with what looks an awful lot like ole Emperor Palpatine (Ian McDiarmid). But while we’ve been assuming all this time he was some kind of Force ghost, well, he doesn’t look much like a ghost there. However, I will remind you of Yoda’s scene in “The Last Jedi” — he starts off looking all ghostly, but as the scene goes on he eventually just looks like a regular living person standing there. JJ and co. could be pulling a similar thing here.

It’s worth noting that this image doesn’t look like any of the places we saw elsewhere in the trailer. It would make sense for Palpatine to play some mind games with Rey — this shot, and maybe that Dark Rey one from the D23 video, could be a vision from the Emperor.