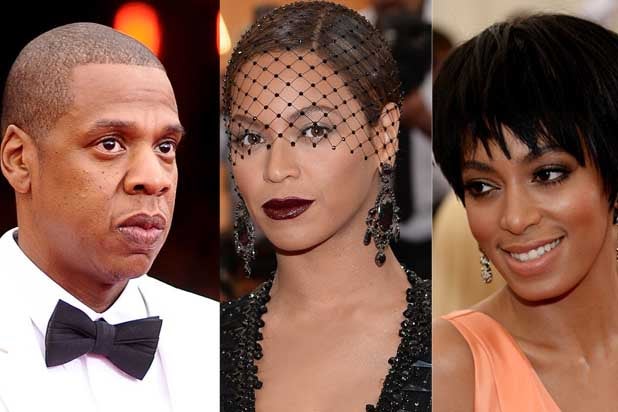 The world stopped on Monday to watch Jay-Z get attacked by his sister-in-law, Solange Knowles, after the Met Gala last week, while Beyoncé stood by and let the fists fly. Naturally, now everyone wants to know why the fight broke out.

Also naturally, the internet is full of media outlets, anonymous sources and people who don’t know the famous family who all think they have the answer to that question.

Here are six theories floating around that are either worth investigating further, or forgetting entirely. Or just turn off your computer now and move on with your life.

1. Solange wants a Beyoncé-sized career, but Jay Z won’t find the time to make it happen.
The Daily Mail reports that an anonymous source, citing an anonymous family friend, says the fight is the result of pent up frustration Solange has been harboring since Jay Z won’t help her produce an album.

“He hasn’t kept his promise to help her,” the anonymous source said. “Jay keeps telling her to give him some time and he will sit down and write with her and then get her into the studio but he hasn’t done it yet.”

“Solange’s album is coming out soon but there is no buzz about it, which is a bad sign within the industry. Solange wants a major career like her sister and she’s tired of living in her shadow. She’s jealous,” the anonymous source continued. “Jay Z promised he would help take her to the next level but he never found the time to keep his word.”

2. Jay Z was pissed at Solange for letting her friends use his name to get into the party, and Solange was pissed at Jay Z for wanting to attend Rihanna‘s party without his wife.
The Daily Mail also reports anonymous sources  saying Solange’s friends “kept name dropping Jay-Z. They were pretending they were guests of his and not hers.”

So then Solange got mad and wanted to leave.

So then Jay Z agreed to leave, but didn’t to go home and planned on checking out Rihanna‘s party.

So then Solange was all like, ” ‘Why can’t you go home?” (turns to Beyoncé) “Why does your husband need to go to the club right now?”

And then Solange started swinging.

The rest is history.

3. It’s a Knowles family feud, and Jay-Z is caught in the middle of it.
After the surveillance footage from the Standard Hotel leaked online this week, Solange deleted all but ONE Instagram photo featuring her sister. The lone survivor (below) is 15 months old, and features the two sisters smiling alongside music video director Melina Matsoukas.

Meanwhile, Beyoncé turned to God for guidance over an ambiguous issue plaguing her life last week — just DAYS after the Met Gala.

“Help me to choose my friends wisely so I won’t be led astray,” a prayer posted on her Instagram reads. “Give me discernment and strength to separate myself from anyone who is not a good influence.”

So was she talking about Solange? Instragram user jd_demetri believes he connected the dots and commented, “Oh this is about the Solange and Jay Z fight.”

A number of Twitter users supported this theory by asserting similar opinions:

I just think Solange is a crazy, embarrassing bitch.

Solange is a trill ass bitch.

This shit shouldn’t surprise anyone Solange is a crazy bitch pic.twitter.com/57bezYtG7M

See video: Chelsea Handler Addresses CBS Talks: ‘I Would Never Be on a Regular Network’

6. Drake knows the truth — Jay-Z thinks “he’s the illest person,” and Solange wanted to prove even the illest feel pain.

An anonymous insider allegedly speaking on behalf of former “Degrassi: The Next Generation” star Drake told HollywoodLife.com EXCLUSIVELY that the rapper not only watched the video “on repeat about ten times while laughing his ass off,” but that he has his own suspicions about what sparked the fight.

“He thinks that HOV probably said some f–ked up stuff to her, or tried to come off like he’s the illest person who’s ever walked the face of the earth, like he portrays in his music,” the man/woman/infant/imaginary friend told the celebrity gossip outlet. “Solange probably got tired of Jay Z’s hype and tried to bring him back to earth.”