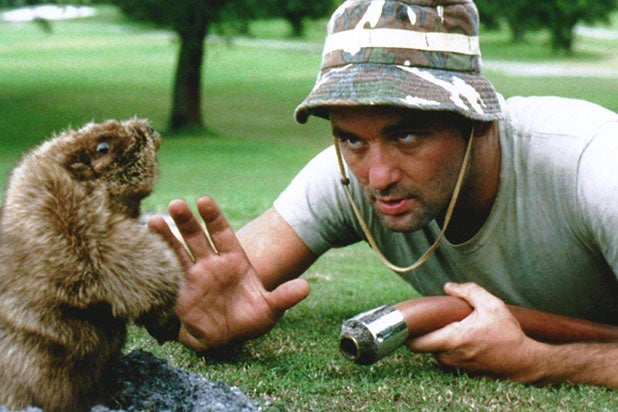 Just like Carl Spackler and his imagined victory at the Masters, “Caddyshack” was the surprise cult comedy no one saw coming.

The year was 1980. Chevy Chase and Bill Murray were at the peak of their fame in their halcyon “Saturday Night Live” days; Rodney Dangerfield and Ted Knight were having career resurgences; and “Animal House” was a massive blockbuster that ushered in a new generation of slobs vs. snobs comedy into the mainstream.

And yet the cast, producer Doug Kenney and director Harold Ramis were prepared for “Caddyshack” to tank. Ramis was a first-time director trying to wrangle a fiasco of a production. Early preview screenings made them think they had floated a Baby Ruth in the pool rather than landed on the next “Animal House.” And the response from critics and the box office was tepid at best.

Entertainment Weekly film critic Chris Nashawaty’s new book, “Caddyshack: The Making of a Hollywood Cinderella Story,” charts the journey the film took to cult acclaim, from Kenney’s time at National Lampoon to the cast’s rise to stardom at Second City and “SNL.” There are a lot of surprise revelations about the making of “Caddyshack,” from cocaine-addled benders on set to some last minute scrambling to get Murray’s character in the film at all.

The original script of “Caddyshack” written by Ramis, Kenney and Brian Doyle-Murray clocked in at 200 pages and was far different from the movie it would become. “It looked like the Bible,” an executive on the film, Mark Canton, says in the book.

The script went through so many last minute changes on set that the actors lost track of  them. Entire monologues and memorable lines of dialogue from Chase, Dangerfield, Murray and more were completely improvised, as was much of the film.

Not once in the 200 pages did the name Carl Spackler appear, Nashawaty writes. Murray was a late addition to the cast, and when he finally did have a character, he appeared in only a handful of scenes. His “Dalai Lama” story was given to another actor who struggled with it, his scene with Chase’s character Ty Webb was tacked on after Murray had already wrapped and returned to “SNL,” and his “Cinderella Story” monologue was entirely an invention of Murray. There was nothing written in the script for the scene, so Ramis gave Murray the direction, “Did you ever do imaginary golf commentary in your head?” The rest is, well, a miracle.

The role of Danny Noonan went down to two finalists — Mickey Rourke and Michael O’Keefe, who ultimately booked it. “This was the early, young, hot, relaxed Mickey Rourke,” O’Keefe says in the book. “He was as compelling as Marlon Brando in a way back then…But I’m a little more easy on the eyes than Mickey. Clearly it would have been a much darker movie.”

Ramis described Rourke as “maybe too real for the movie,” saying, “Michael O’Keefe seemed like a really good boy. Plus, he was a scratch golfer. Mickey Rourke was much more complicated.”

Nearly everyone was doing cocaine – A LOT of it

Michael O’Keefe says in Nashawaty’s book that “cocaine was everywhere” on the set. He described his 11 weeks there as “a permanent party.” Instead of responsible producers making sure everyone played by the rules, Kenney led the charge of much of the cast and crew’s rampant drug use. “The eagle has landed; the eagle has landed! Get your per diems in cash, the dealer’s here,” he would yell, running through their motel hallways. Chase described that cocaine would just “materialize” on set, much to the annoyance of Knight, who always got to bed early, showed up for call time early and didn’t appreciate the looser, more improvisational approach to filming.

Shooting at the same time and released the same summer was “The Blues Brothers,” which was also when John Belushi started getting heavily addicted to cocaine. According to Nashawaty, when that film’s budget started rising as a result of Belushi’s binges, the studio was forced to crack down on the parties on the “Caddyshack” set.

Bill Murray was a “magnificent flake”

Murray has countless urban legends to his name, but his legendary status started even before his “Caddyshack” days. He was shooting the Hunter S. Thompson movie “Where the Buffalo Roam” in the summer of ’79, and was due back in New York for “SNL” in the fall, so Ramis had him for just six days. But Murray never made it clear just when he’d show up on set. As far as Ramis knew, Murray was MIA.

Turns out Murray had commandeered Lorne Michaels’ VW bug and had driven it everywhere from Los Angeles to Florida to Aspen and took it upon himself to install a stereo along the way. When he finally arrived, he rolled up in a golf cart and said, “Which way to the youth hostel?” The following morning, Murray and actress Cindy Morgan (who played Lacey Underall in the film) woke up together on a nude beach in Jupiter, Florida, after the two had just met.

The gopher saved the day

As Nashawaty writes, it became clear fairly quickly that Ramis was out of his depth in editing “Caddyshack.” He had come from an improv background and used a “yes and…” mentality during filming, but he struggled to find a connective thread for the countless scenes of his actors just riffing and being goofy. The first cut of “Caddyshack” clocked in at four and a half hours. And it was a mess.

They had several editors look at the footage and attempt to salvage it, but it was executive producer Jon Peters who suggested that the gopher, only seen sparingly at first, could be the thing that tied everything together. They were then forced to ask the studio for an extra half-million dollars to build an animatronic gopher and, in the process, cut out the romantic subplots of many of the younger actors. When Kenny Loggins saw that gopher dance, the theme song he wrote should’ve been a clue that everything with “Caddyshack” would be just fine: “I’m Alright. Nobody worry about me.”