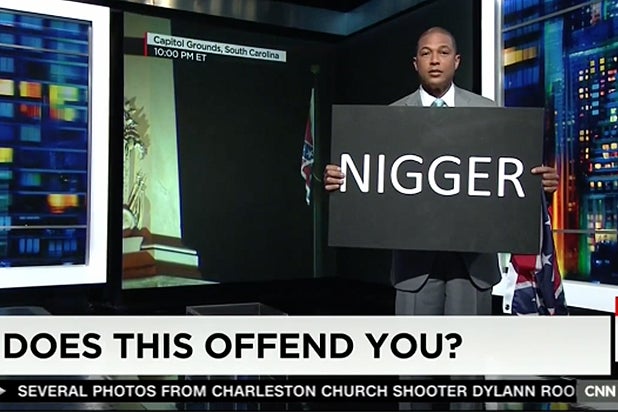 Don Lemon stirred the pot again Monday, opening his show with a sign featuring the N-word and using the word several times during segments that focused on President Obama’s use of the word in an interview.

Lemon’s antics sparked outrage on social media with most panning the anchor’s actions as a stunt: “It’s clear that CNN has become more interested in the controversy Don Lemon garners than in his integrity as a news man,” one Twitter user said.

Here are the five most explosive moment from Lemon’s interview:

1. Leading with the N-Word

Lemon set the tone right out of the gate, holding up a confederate flag while asking his viewers if it offends them. Next, he raised a sign with the N-word spelled out in bold letters, asking viewers if that offended them.

Obviously, leading a cable news with one of the most polarizing words in society is edgy enough, but what made it even more controversial was its placement directly before an interview with the niece and nephew of one of the victims of the Charleston church massacre.

“What I don’t understand is why the state senator is moving to do cultural genocide on the southern men and women…maybe he’s not from the south,” Hines said regarding taking down the flag.

Lemon’s facial response was priceless, raising his eyebrows while being left speechless. “That is so absurd,” Hostin said.

“In order to have an honest conversation about words, and what they mean, we have to say what we mean, just as the president did,” Lemon opened a segment about President Obama using the N-word.

Hostin came out swinging against President Obama, saying it’s below the dignity of the office of the president to use such a volatile word. She then turned her ire on Lemon.

“What is shocking to me, Don LEM-AN [pronunciation by Hostin] is that you are willing to say the flag should come down, which is a symbol of hatred and racism, but you have used the N-word in my presence at least 10 times.”

Lemon said he wasn’t using the word in a hateful way.

“Journalists should not be censored, I think we are the record, and the record shows what the president says, so if the president can utter that word, we should be able to use it too,” Lemon said.

Lemon then defended himself against Hostin’s criticism of him using the N-word.

“I did a whole special on the N-word where we said it the entire team, I’ve said that word for nine years on CNN,” Lemon said.

“And you’ve been wrong for nine years,” Hostin shot back.

5. Social Makes Lemons Out of Lemonade

Don Lemon asked viewers if the use of the word offended them. Many social users responded by spoofing Lemon